Farewell To A Legend

I had every intention of posting a book review today. But then the news dropped and I felt like it was incumbent upon me to take note of the loss of one of the biggest and most important names of our modern popular culture.

I can’t bring myself to call the loss of Stan Lee “tragic”. To be sure, the news makes me sad and the weight of his departure is going to be felt for a long time to come.  Still, to say that he led a long and successful life would be the understatement of the year. Ninety-Five years is a long time and we were definitely the benefactors from a long career that almost ended before it really began. For a man who was at the end of his rope, ready to leave the industry far behind in the rear view mirror of his life, Stan Lee ended up defining the landscape of a generation, setting off an industry that has generated more quantities in money than we probably have names for.

But more important than that, the number of childhoods built around the structures that Stan Lee brought into being is staggering to contemplate. How many dreams have been sparked by the images on those pages? How many characters have come into people’s lives at just the right time and provided that little bit of light to beat back the darkness and offer something comfortable to hold on to? How much of our own creative spark has been lit, specifically by the art that this man created? We paint on the canvas of our art, whatever form that may take, driven by the unconscious dream-scape, populated to at least some extent, thanks to the work of Stan Lee.

I grew up at a time when being a nerd was much less of an accepted quality than it is now. And for those of us who lacked in the social popularity of others, comic books provided an essential outlet, a source of comfort to us and created something for people to connect over. We didn’t have a television around the house for much of my childhood so comic books became a major source of my entertainment over the years. I fell in love with Spider Man, with Captain America and Wolverine, the Fantastic Four and the Avengers. I was sucked into, not just the great stories but also the fantastic artwork that provided the vehicle for those stories. Nowadays, everyone and their cousin have jumped onto the Marvel wagon with the explosion of the cinematic universe. And I think this is a great thing. But even for as peripherally as I read comics when compared to others, I am still happy to have had them as a part of my life, so early on.

To me, what I loved the most about Stan Lee was how little sense of snobbery I felt from him. I think he fundamentally loved being a storyteller and that love was clear in the books he created. I saw him once in an interview, discussing how he had come up with the idea of Gamma radiation being the catalyst that turns Bruce Banner into the Hulk. He didn’t know what that was, he didn’t do exhaustive research finding out the true nature or makeup of radiation 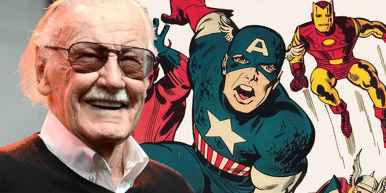 . He just needed a reason for the story to move forward in the way he wanted. How about it happens because of an exposure to Gamma radiation? That sounds cool. He wasn’t trying to stagger us with his scientific knowledge, he was trying to tell a good story.

And good stories he told.

Stan Lee was a glowing light in our society He was responsible for so much great work, he touched so many lives and he had a lot of reason to become bitter with the whole thing. It wasn’t until late in his life, in the early days of comic book heroes swinging onto the silver screen that we found out how little Stan Lee was getting paid by Marvel, how much other people were profiting off of his work. Lawsuits were filed and eventually Marvel made good. But despite all of this, I don’t know if I ever saw Stan Lee without a huge smile on his face. Besides the obvious lessons I have learned in terms of my writing, it’s a life lesson I have tried to take to heart as well.

The world will never be the same, thanks to Stan Lee and all the fantastic work he produced. It is a debt we will never truly pay and at times as sad as this, all I can say is how grateful I am for having had the luck to have existed at a time when all this beautiful art was coming into being.

Chad A. Clark is an author of horror and science fiction. For more information on his literary universe, check out his official website or take a peek at his Amazon author page

This entry was posted on November 12, 2018 by Chad A. Clark. It was filed under Uncategorized .

Leave a Reply to Chad A. Clark Cancel reply