The vampire has been a popular recurring theme since movies began. Even before the most iconic bloodsucker, Bela Lugosi, appeared in DRACULA (1931), there was NOSFERATU (1922). Every generation has created its own image of the monster, either as a new adaptation of Stoker’s novel, or, more interesting, as some new twist on the theme. The vampire seems to be unique among the classic monsters in that it is simultaneously feared and desired. The vampire can be seen as some existential romantic figure who promises victory over death, or as a parasite spreading eternal damnation. In one figure is wrapped all our obsessions with love, sex, death and disease. Each subsequent vampire movie ends up being a reflection of the current generation’s phobias and desires.

Tony Scott’s film, THE HUNGER, can be seen as a reflection of the 80’s. It is, of course, about eternal life, or rather, the promise of it. There is also love and loneliness, but predominant is also the idea of disease and addiction. There is also disillusion and the realization of having been led to believe in something that didn’t come true. For a generation left in the emptiness after war and the free love movement, as well as the dawn of AIDS and HIV, they were themes that were deeply relatable. 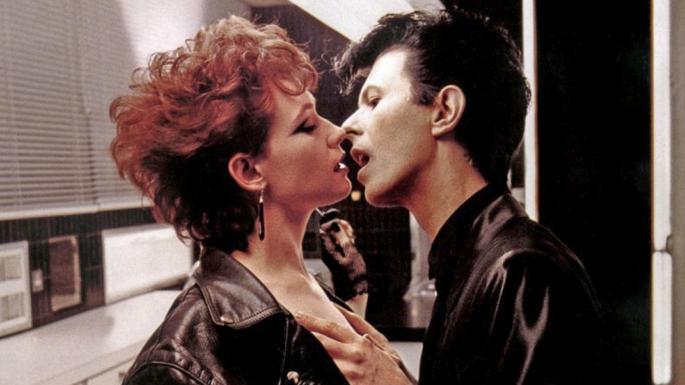 THE HUNGER is an adaptation of Whitley Striber’s novel;  screenplay written by Ivan Davis and Michael Thomas. Cinematographer Stephen Goldblatt and Tony Scott worked together to create a film that can be described as an Art Deco gothic romance. It is shot like one long music video, a style popular in the 80’s. The opening sequence, arguably one of the best, is of the band Bauhaus performing in a nightclub interspersed with scenes of David Bowie and Catherine Deneuve’s characters luring a young punk couple to their apartment and killing them, as well as scenes of a lab monkey going mad and ripping another monkey to pieces. Flashes of Peter Murphy growling the lyrics to “Bela Lugosi’s Dead” over and over.

Catherine Deneuve is Miriam Blaylock, a multi-millennial vampire, and David Bowie is John Blaylock, her lover for many centuries. They hold court as a beautiful eccentric couple playing and teaching classical music in a spacious Roman style apartment complete with marble statues. They are elegant monsters preying on a crass, loud world too blinded and jaded to recognize the real danger. However, unlike traditional vampires, Miriam lives forever, but the ones she makes do not. David begins to age, rapidly, just as all of Miriam’s other lovers have before him. Miriam promises eternal life in order to draw others to her so she won’t be alone. She hopes they will last, but they never do.

Both Miriam and John separately seek out Dr. Sarah Roberts (Susan Sarandon), a gerontologist specializing in trying to slow down the aging process. She is studying Progeria, hoping to learn how to reverse time. Her lab monkey has shown her accelerated aging, but unfortunately, also the madness it brings. John seeks her help, but she doesn’t initially believe his claims. Time runs out for him and he joins all of Miriam’s former lovers down in the crypt.

Sarah finds herself drawn to Miriam, a strong attraction she can’t explain or resist. They share blood and afterwards, Sarah finds herself changing in ways she can’t explain scientifically. She is overcome with an addiction that threatens everything she has, even her boyfriend, Tom (Cliff De Young). Eventually, she sees Miriam for what she is and traps her with the ones she sentenced to linger without release. She then begins her own eternity, how ever long it will last.

THE HUNGER stands apart from other vampire films, not so much in content, but in the look of the film. There are shots of open spaces filled either with much light or darkness and echoing noises. The characters voices often sound as if they are coming from far away. They are sometimes muffled by the sound of water, speakers or distance. Music, either punk or classical or discordant noise plays through most of the film. Miriam and John use use small blades, disguised as Ankh necklaces. The scenes sometimes cut rapidly back and forth, adding to the disorientation, but there is lyricism that also flows through the film that speaks of the profound loneliness and betrayal of the characters.

THE HUNGER shows us that sometimes at the root of love is the fear of being alone. It is sometimes a beautiful lie hidden in obsession and addiction. Like the lab monkey that destroys its mate, all the characters turn on the ones they love. Even young music student Alice (Beth Ehlers) is brutally killed by John. All that is left is emptyness and echoes.

Kim McDonald is a horror junkie from outside Charleston, SC. Her reviews and stories can be found on fairymusings.com, loudgreenbird.com and mydailydead.com.