The Gist: A war has been raging between vampires and lycans for centuries though there has been peace for many years until lycans come out of hiding once more. Selene, a vampire warrior, and daughter of one of the most powerful vampire lords, Viktor, finds herself in the middle of the war and a mystery when she meets Michael who is wanted by both sides.

Well let’s start by being honest shall we? If you’re a straight male with a pulse then all you needed to get you to watch this movie was the poster of Kate Beckinsale in the tight leather outfit she wears for the full two hours-ish of this film. Sure vampires, werewolves, ancient legends, myths and mysteries make it an overall good film but it could have been about the ancient battle between kittens and puppies and every guy over twelve would watch this movie. So now that we have the obvious out of the way we can get on with it. Oh, and there be spoilers ahead so if you have a problem with that stop reading. Duh!

At the beginning Selene (Beckinsale) explains to us that there has been a war between vampires and lycans for centuries but things have been calm since a lycan uprising which ended when the lycan leader, Lucian (Sheen), was apparently killed. Ever since, vampire warriors like Selene have hunted and killed as many of Lucian’s “pack” as they can. The film opens on her doing just that though at first they miss what’s obvious, the lycans were following someone. That someone turns out to be Michael Corvin (Speedman) but why?

Meanwhile the vampire coven that Selene belongs to seems to be more of a diplomatic and political one with a clear hierarchy. The vampire lords take turns hibernating to keep themselves safe with only one vampire in charge at any one time. At the start of the movie the vampire in charge is Kraven (Brolly) though he seems shady as f*ck and hey, it turns he is! When Selene hunts down Michael to find out what makes him so special she learns that Lucian, the one believed to be dead for centuries, is alive and well. Astoundingly, when she tells Kraven he refuses to believe her. Gee, I wonder why that is? Perhaps he’s just a dick, okay… he’s a dick but there’s more and you’ve already guessed what it is unless you’re not very bright. You’re reading this so I’m assuming you’re not a complete idiot.

Underworld isn’t really a horror movie per se, it’s more of an action movie that uses vampire and lycan lore to build a well thought out history and backstory which gives what is basically an action movie some depth and compelling story. There are plenty of ridiculous stunts, corny lines and other bits that detract from the main reason you’re watching this: Kate Beckinsale in tight black leather! Did I mention that already? Fair warning, it may come up again (kinda like something else when I watch this movie!)

So it all turns out that Michael is a descendant of the family where all vampires and lycan started, the Corvinus family. Lucian spent his centuries in hiding tracing the bloodline back to where it all began, seems an awfully long time but hey, what do I know? Once Selene realizes she can’t trust Kraven she decides to wake Viktor (Nighy), a vampire lord and the one who turned Selene into a vampire to begin with. Viktor is less than pleasant but then it seems he’s always been a giant prick. I gotta say, aside from that tight leather outfit on Beckinsale, Nighy is the best part of Underworld. I think Nighy may actually be a vampire lord though I cannot prove this. The point is Nighy is badass and one bad MF’ing vampire lord.

Apparently the one thing no one can survive is to be bitten by a werewolf and a vampire, unless you’re Scott Speedman… I mean Michael Corvin. Selene tells Michael no one can survive both bites which tells you instantly that she is going to bite him (Lucian already had). In case you don’t know this series (Why? Do you live in a fucking cave?) Viktor had his own daughter put to death for having an affair with Lucian because apparently there is some ancient law that a bat and a wolf can’t love each other. It’s soooo 1st century Neanderthal thinking though in Viktor’s defense it is kind of like a cat and a dog getting it on, two different species and all that.

Now where was I? Oh yeah, Selene has to bite Michael to save him, of course, and pretty much everyone dies. Lucian – that fucker finally gets it. Kraven – oh, that fucker really gets it! But the best is Viktor, the crotchety hard-ass motherfucker gets sliced clean in two by his own daughter. Well… okay, his daughter’s replacement, Selene. The main thing is she does it in that super tight leather outfit which should really have popped off by that point of the movie but the damn thing is sewn with steel fiber or something! In the end there is plenty of death which is always a good thing. Also the special effects in this were pretty damn awesome so thanks SFX guy!

When all is said and done and the credits role the only disappointing thing is that you realize you sat there glued to the screen for two hours and that damn leather outfit never popped off. It’s a bummer but life goes on. Underworld is a fun, cool flick with plenty of vampire and werewolf lore tossed in for several movies and then they made those too. As a standalone film Underworld is pretty good. It may not knock your socks off but it’s solid and sets up a lot for later. Even though those leather pants never slip or rip I’d still give Underworld a solid 7 out of 10 mainly because it’s so cool and so much fun. As a series… you can stop watching after the third film (the prequel one – Rise of the Lycans) because they get pretty bad after that with the last one (Blood Wars) being downright awful in my humble opinion. There you have it now go watch it!

Feind Gottes [Fee-nd Gotz] is a horror writing, metal loving award winning horror author. Currently Feind has stories published in six anthologies with several more awaiting release. In 2017 Feind placed in the Top Ten in The Next Great Horror Writer Contest sponsored by HorrorAddicts.net then later won the 2017 Vincent Price Scariest Writer Award from Tell-Tale Publishing with his story Vacuity which will be featured in TTP’s 2018 horror anthology scheduled for a Halloween release. 2018 marked a milestone for Feind with the publication of his first solo published work with the unleashing of his novella, Essence Asunder, by Hellbound Books. Lastly, Feind won the Dark Chapter Press Prize 2016 novel writing contest with the first draft of his first novel, Piece It All Back Together, which is currently being edited for a late 2018/early 2019 release from Stitched Smile Publications. 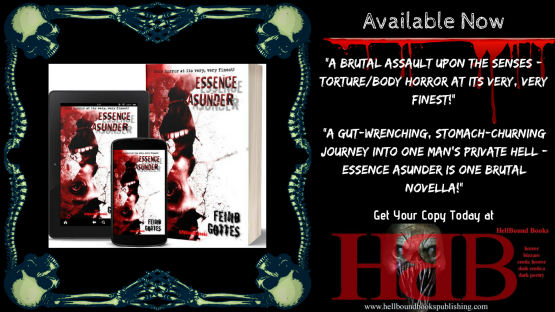