Reviews In The Machine : What Good Girls Do, by Jonathan Butcher 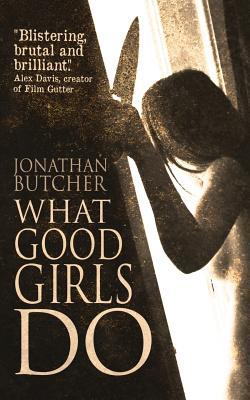 Chances are that if you have found your way to this review, what I am about to say is likely unnecessary but I think it is still important to make this clear, up front.

You can always say things like, “this book isn’t going to be for everyone”. It’s a statement I have always been a little perplexed with, even though I use it myself often enough. My issue with it is that ultimately, isn’t that going to be the case with every book? So I am going to take this a step further.

This book will offend you.

You should exercise the full extent of your caution and awareness before you undertake this read. If you have even the smallest tinges of sensitivities to graphic and extreme content, you should be aware that this book has it in great magnitude. If ever there was a book that needed to come with trigger warnings, this would be it. It will offend you and I say this not as a criticism but because the horrors in the book and the way this character is treated should offend you. This book contains scenes of violence, abuse, neglect and exploitation in brazen fashion.

It also makes you think.

The main character is introduced in a quick and brutal first chapter. She is being held prisoner in the home of an unidentified male, someone she identifies simply as “Daddy”. It is with sinking dread that you realize that she has been essentially raised by this person for the purposes of providing pleasure and that her outlook on the world around her is so distorted and skewed, she doesn’t even share the same basic language. It was chilling for me when I reached the moment that I realized that she referred to not just her captor as Daddy, but in fact was referring to all men as, “Daddies”.

The second character is a wife, sharing a morning at home with her husband and children. The chapters of the book jump back and forth, twining the stories around each other in a dual narrative that seemed disparate at first but once the narratives are brought together; it’s off to the races in a way that was appalling, tragic and impossible to look away from.

One thing Butcher does particularly well is in crafting the voices for these two characters. It’s easy to just say that this chapter is from this character’s point of view and this chapter is another. But I genuinely felt the depth and complexity of both of these women. The difference in language in how the two of them talk and see the world around them is beautifully crafted. It feels strange using a descriptor like that for a book of this nature but he really does an outstanding job capturing the spirit and voices of two completely different people.

Reading this book, I found myself contemplating at times the extent of our tolerances when it comes to the horror genre. Is there a line that should be left alone? Is it possible to go too far? This is without a doubt one of the most extreme books I have ever read but the answer I kept coming back to was that a lot of this is dependent on the context in which the content appears in the first place. There were plenty of moments in the book that made me want to turn away, made me question why I was reading this thing. What I find interesting though is that despite all those moments, I never really questioned whether or not the content I was reading was needed for the story. There were a few moments that I thought he could have pulled back a little but on a whole, I felt like everything was there for a reason.

You can tell (I think) when an author throws in something gross or explicit, simply for the purposes of “punching up” or making their story more “in your face”. There does seem to be a culture of, “see how much I can shock you” that I am not necessarily a fan of. But in the case of What Good Girls Do, I was shocked and appalled but all throughout, I felt like I was reading the natural progression of a story as opposed to grit and gore that was being arbitrarily shoehorned into a book.

The best kinds of monsters are the ones that can’t be reasoned with, the ones who you can’t talk down or convince to be merciful. As the scenario in this book unfolds, what makes it particularly effective is that this monster in human form shares all those attributes. Because of the altered understanding of her world as a result of her captivity, she becomes essentially an uncomprehending monster that cannot be negotiated or bargained with.

And even at the height of the horrible acts she was conducting, I found that I couldn’t bring myself to hate her. And this is likely the most powerful aspect of the book for me. Because the thing is, I understood that everything she was doing was a result of her captivity and being sculpted against her will into this creature that destroys without really understanding what she is doing. I understood that the real monster in the story was the one who had kidnapped her, withheld her from the world and allowed her to grow into what she has become.

My sole criticism for the book would be that in the last chapter, the story makes a bit of a shift that I had a hard time accepting. Not because of how it made me feel or because I needed the book to end a certain way. It was that a character makes a decision that I didn’t really feel like I understood. I didn’t buy that the character had come to the point of the final act we bear witness to. I really needed that moment to be drawn out a little more so that Butcher could devote more to exploring the motivations and causes. I’m sorry for being so cagey in my framing of this, but I obviously can’t get into details without spoiling the end of the book. Still, it was this point that probably shifted my review from five stars to four. It was a shocking ending, to be sure, but speaking for myself, I needed Butcher to take a little more time in order to properly sell it.

Is this going to be a book for you? I can’t answer that. What I can tell you is that I was captivated all throughout. As a parent, the story wreaked me, emotionally. It was one of the most challenging reads I have ever taken on. This book made me feel. It made me cringe. It made me think and it made me recoil. It made me ponder the morality of the world around me and shudder at the thought of such things like this happening in real life. It made me scared for us as a society as I can absolutely imagine something like this happening in neighborhoods across the world. This is a book that was eye-opening and mind-bending. It found the cracks and crevices of my being and forced its way in.

This book does what all art should. It doesn’t care about you or in conforming to what you want.

Follow the link. Buy the book. Take the risk. Read the book. Do it.

This entry was posted on September 17, 2018 by Chad A. Clark. It was filed under Uncategorized .