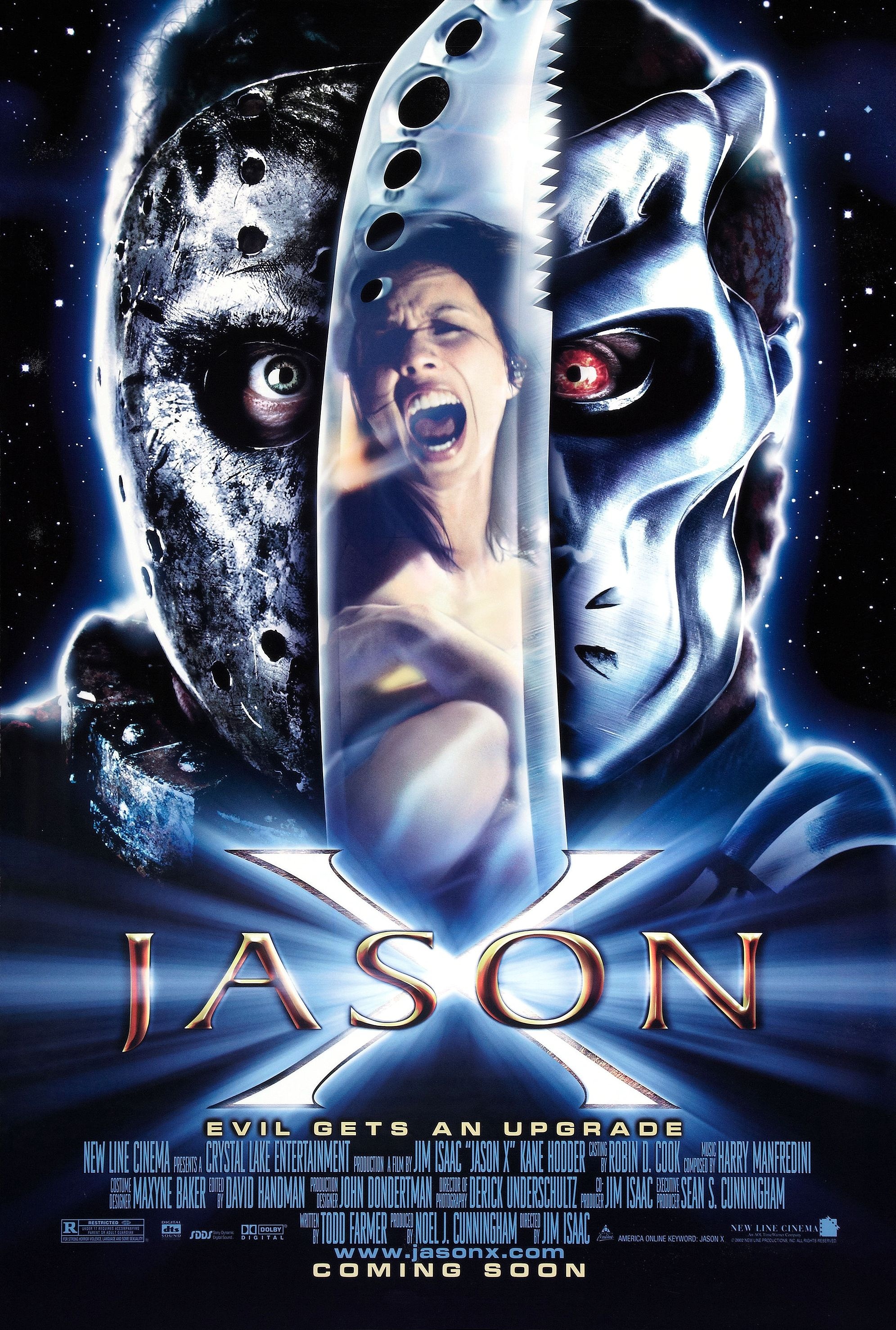 There seems to be a reoccurring joke among horror fans. When a franchise goes to die, it goes to die in space. I’m not sure which franchise started it. Maybe when Critters went into outer space in Critters 4 (1991), or maybe it was Leprechaun 4 (1997)…but to be fair, this series died waaaaay before then. Hellraiser: Bloodline (1996) went into space, however brief. And truth be told, that movie was pretty darn good. However the joke started it would seem a fan favorite amongst the slasher sub-genre ALSO decided to venture out into space. Friday the 13th part X upon their 10th film explored where no slasher had gone before. Now, to be clear, the movie was titled Jason X, just like with Jason Goes to Hell (as apposed to Friday the 13th part 9), due to a lack of property rights with Paramount. They were able to snag the characters, or character, but not the franchised title as a true Friday the 13th. Despite that, fans have pretty much just grouped them all together. Not caring for all the boring legality. With all that settled, lets get back to what we’re really here for. Was Jason X good? Or did the franchise die in space? Heaven help us, we’re going to find out together.

“Jason Voorhees returns with a new look, a new machete, and his same murderous attitude as he is awakened on a spaceship in the 25th century.”

Jason X is a movie fans love to hate. And not hate in a strong loathing sense of the word, but more like a “man, that movie was horrible…you want to watch it?” and then the response is typically, “Hell ya!” Comparing with how we started, way back with 1980’s Friday the 13th and 2001’s Jason X, its incomprehensible. Where does one begin? The original was poetic in a way and was rational, a mother avenging her son’s accidental death. Yeah, Pam Voorhees was a little unhinged, but we understood, hell we even sympathized with her. “Get her, mommy, kill her…” But with Jason X, nothing makes sense, not on the same level at least. The movie takes that sympathetic understanding of a killer and pushes it 500 years into the future and then launches it into space. What exactly is Jason’s motivation here? Perhaps did he simply just want his machete back…?

The story actually starts in an undisclosed moment in modern time. Jason (played by the very epic Kane Hodder) has been captured. But as all cheesy slashers go, Jason soon escapes his bonds, killing a well tailored David Cronenberg (playing short lived Dr. Wimmer) and goes after final girl Rowan (Lexa Doig). Part of her story was that she believed the only true way to imprison Jason was to put him in a freezer. Realizing that she’s the last one standing, she tricks Jason into walking into said freezer and shuts the door on him. Well, this wouldn’t be a F13 movie if the best laid plans didn’t go sideways. Somehow, Jason slices a hole in the fridge, breaching the containment thingy and releasing carbonate gas…(I’m making this up as I go people!)…..freezing both Jason and Rowan.

Don’t ask me to be rational here, as in how in the hell did no one go looking for her? Rowan was part of a research team funded by the government. Uncle Sam gonna want to know what happened to his money, right? Maybe someone did check in on the project and found that the containment was breached and sealed and decided that it was best not to mess with it. Just leave it be. I don’t know. I just write reviews.

Earth 2455, now technically called Old Earth. Apparently somewhere along the way we ruined this once blue dot caught in a sun beam. Sorry Carl Sagan, we fucked up. Now a dust storm riddle planet, the only people that visit are lost tourist and student archaeologists. And as it so happens, it is the latter that stumbles upon still frozen in carbonate Rowan and Jason. Curious as any teen would be, these students cart the two back to their in orbit space ship under the direction of Professor “kinda shady but in a lovable way” Lowe who spends his trips on Old Earth not only to teach his students archaeology, but also to collect artifacts to sell to certain collectors back on New Earth.

As far as they can tell, Jason is nothing more than a Popsicle corpse. Rowan, however, is still viable. And so with the magic of future science (nanos) they bring the final girl back to life. Rowan is obviously distraught about a great many things. Mostly that she is alive, that she is 500 years into the future, and lastly that they have stupidly brought Jason on-board the spaceship.

“He is an unstoppable killing machine. He’s not dead” -Rowan.

I’ll give you a guess at what happens next. If you said, Jason wakes up and goes on a killing rampage, you’d be correct. The kills though are pretty darn good, you know, from an artistic slasher aspect not a deeply disturbed horror movie fan kinda way. His first in the brand new world and one of the coolest is when he takes a scientist’s face and dips it into liquid nitrogen and then proceeds to smash it into tiny little frozen red chunks. Bravo, Jason, very inventive. And there are new heroes that take on Jason, not just the plucky Rowan, such as the very badass Sgt. Brodski (played by Peter Mensah) and Kay-Em 14 (played by Lisa Ryder). Kay-Em 14 is the resident android and very obvious sex puppet of Tsunaron. When she finally goes toe to toe with Jason, she becomes a leather clad She-Ra (oddly with a He-Man bowl cut) with some very awesomely cheesy lines.

As the body count grows, they try to escape the ship on board what I can only assume to remember as an emergency pod of some sort. Leaving the main vessel to burn up and explode upon entry into New Earth. Things don’t go as planned and after some fist-d-cuffs with Kay-Em 14 the Jason Slayer, Mr. Voorhees is transformed (thanks to future science) into a near indestructible Super Jason. The survivors use whatever they can at their disposal to thwart him, giving themselves time to escape, including using (in a rare clever moment of the film) holograms of two camp counselors talking about smoking weed and having premarital sex. Watching Super Jason smash them in sleeping bags was a very hilarious and fantastic moment in film history.

VR teen girl #2: Or do you wanna smoke some pot?

VR teen girl #1: Or we can have premarital sex?

[both remove their tops]

The holograms fizzle and Jason returns to his rampage. This time Sgt. Brodski steps in to save the day. Sacrificing himself to save what remains of the crew. As the ship explodes and Brodski and Jason tumble towards New Earth both presumably burn up upon entry. Cut to an idyllic camp ground and what is assumed to be a shooting star. A couple watching go to investigate. And the last we see is the remnants of Jason’s mask floating to the bottom of the lake followed by the catch praise “chh-chh-chaa-chaa.”

Jason X is nothing to swoon over. But as for a Friday the 13th movie, it is…well…nothing like a Friday the 13th movie. If you thought Jason Takes Manhattan was jumping the shark because it went to a very Canadian looking New York, wait till you get a load of this movie. The kills are good. The plot…meh, come on, its fucking Jason Voorhees in space. Its not going to be poetic or rational. Its going to be completely fucking nuts, which is exactly what we got. Not a glowing example you would want to introduce new audiences of F13 to, but certainly one long time fans can put on, unplug the brain for a bit, and enjoy.