This film opens with a scene somewhat mirroring the original opening scene from the very first Scream movie, but with a twist — the whole “Wanna play a game?” scenario with everything starting off somewhat flirty and harmless. This time, though, the killer calls Cotton Weary (Liev Schreiber) saying that he’s outside of his girlfriend’s bathroom. Of course, when Cotton hears this he rushes home to his girlfriend’s rescue… only to find her hiding, and, unknowingly, with the killer still in the house. Shortly after, they are both attacked, and neither make it out alive.

The story then continues on to the lives of Sidney Prescott (Neve Campbell) and Gale Weathers (Courteney Cox), and picks up after the revelation of the murder/death of Sidney’s mother’s former lover, Cotton Weary. Miss Weathers, as per usual, decides to do some investigating on her own of the murder by going on the set of the new Stab film. She discovers that Dewey (David Arquette) is working on the film, and starts to question him about what he knows about the others involved in the production. During all of this, the actress from Stab 3 who was playing the character Candy (based off of Drew Barrymore’s ‘Casey’ character from the first Scream film) is murdered by the killer, starting a string of murders surrounding the filming of the third Stab movie. 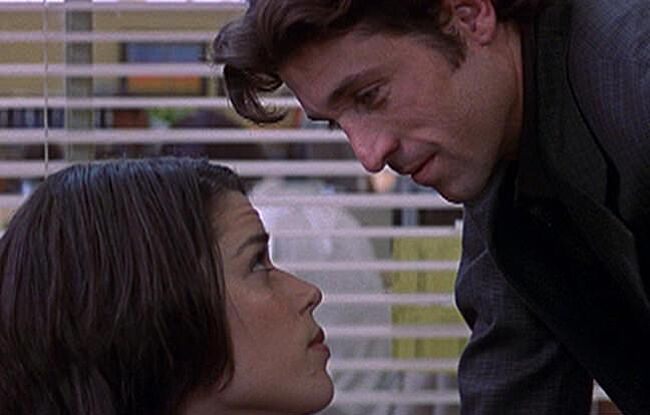 Once Dewey and Gale discover that the actress is dead, Dewey informs Gale of some not-so-great news about the film: that the killings are happening in the same sequential order as the film, and in the script for Stab 3, Gale Weathers character killed off next by the killer. Could this be a potential foretelling of what’s to come for Gale?

While all of this is happening, Sidney is being tormented by someone who is using a voice-changer to sound like her deceased mother, and then changing into the Ghostface killers’ voice. Sidney suddenly realizes that the killer is back, that her witness-protection alias has been discovered, and that now she has to again watch her back or else face death like all of her friends and family. Will she make it to the sequel? There’s only one way to find out!

Like its predecessors, Scream 3 is littered with various cameos (shout-out to Carrie Fisher!), well-timed-out comedic moments, romance, and, of course, tons of meta horror film references. It’s tense, funny, and a unique take on a similar premise from that of the original. As much as I loved the first Scream, I’m glad they tried something a bit different and didn’t just make a rehashing of the first film. It also had its own meta meta production, as, like in Stab 3, Wes Craven supposedly shot multiple endings to the third Scream to keep it a surprise. Although this film isn’t as widely adored, I find that it has its own charm to it. You see characters from previous films in fun and different ways. You’ll see what I mean once you watch it!

I was a little bit worried that this film wouldn’t capture the same feel that the first two films did, and, to be completely honest, after watching the first fifteen or twenty minutes of this film, I had thought they totally missed the mark. However, as soon as they included more of Neve Campbell’s character it was almost like watching the original film all over again! This film received a lot of flak from horror and film critics, but in my opinion it was very undeserving. Even the new characters that they added in were fun and creative. It’s like watching a horror movie within a horror movie which was a great idea to add in to a Scream film. These films are already extremely self-referential; this was just taking it to the next step. I firmly believe that the Scream franchise could make any cheesy classic horror trope work by simply pointing out that that’s what it’s doing!

Now, of course, I’m not saying this film was completely flawless. A lot of the acting — especially from the smaller roles in the film — was rather weak and sometimes a bit hard to watch, especially in contrast to some of the more seasoned actors. There were definitely some flaws within the writing as well, such as characters coming to very specific conclusions without explanation just to try and tie up loose threads or to move the story along without much thought being put into it. Unlike the other films in the franchise, a lot of the deaths and murders appeared offscreen, which, to be honest, was my biggest complaint. The previous films were a lot more creative in that sense, and weren’t afraid to hold back.

With all of that being said, the good definitely outweighed the bad in this film. The chase scenes were as tense as always, and I was happy to see all of my favorites back from the original. Nev Campbell is an amazing actress and her character will forever be one of my favorite female leads in a horror movie. She’s strong, independent, and can kick some ass. Everyone is always trying to protect her and keep her safe, but when it comes down to it, she can really hold her own. I give Scream 3 a solid 7.5 out of 10 and I highly recommend it to fans of slasher films! It continued the story from the previous films without changing the story, which can sometimes be difficult to do when you’re three films deep in a franchise. Good job, Wes Craven; another horror movie well-done!

Hi! I’m Chantel, also known as Channy Dreadful (the headmistress of dreadfulreviews.com), and I am one creepy ghoul hailing from a small city in Saskatchewan, Canada. I am a semi-regular podcast voice, making guest appearances on several podcasts — with the first being Dead as Hell Horror Podcast, and as well on the likes of The Resurrection of Zombie 7, Land of the Creeps, Streaming Horror Society, Horror Movie Podcast and Whedonverse Podcast. Horror-movie-wise, I prefer movies that dabble in the paranormal as well as demonic possession films. These ones get under my skin the most and if done correctly they can also linger in the back of my mind for several days. I also enjoy slashers — the classics, mostly — with killers such as Michael Myers, Freddy Krueger, Jason Voorhees and my personal favourite Ghostface. I spend most of my free time (aside from watching horror films) reading and collecting comic books, which has been one of my favourite pastimes since I was just a little batling. I have also been a professional paranormal investigator with several groups for the past seven or so years locally, with roots stemming from my childhood. Horror and the paranormal have always been a passion of mine, and have part of my life since I can remember. If you’re interested in getting to know me further you can follow me on Twitter @channydreadful! Keep it creepy! xxx