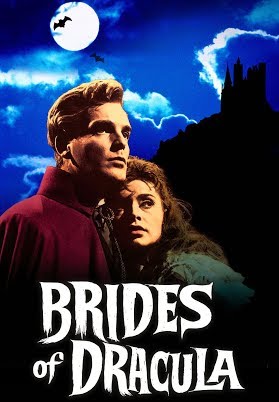 When I was asked to do this review I was initially reluctant, as it would mean re-watching a movie I remember fondly from my childhood. And rather than viewing it with a sense of nostalgia I was being asked to be analytical, and I was concerned that it would be found wanting. Often the passage of time can be unkind to treasured memories, especially when they are examined in the cold light of day. Luckily my fears were unfounded, I watched it – and loved it.

Over the years, the popularity of Hammer Horror Movies has ebbed and flowed with the fashions of the times. Horror has become more realistic and often sadistic, consequently the theatrical, and somewhat simplistic morals of the Hammer Horrors seemed antiquated and naïve. Although after watching this movie, I can recommend it to anyone who enjoys entertainment more than prolonged scenes of torture and mutilation.

Although the title mentions Dracula, neither that character nor Christopher Lee take any part in the movie. Hammer had had an international success with Lee’s first vampire movie and the title is more of a marketing ploy. The vampire in this movie is Baron Meinster (David Peel), a young nobleman cursed by Dracula and imprisoned in his castle by his mother (Martita Hunt) to prevent him terrorising the local inhabitants. Although her benevolence doesn’t extend to the young strangers she entraps to satiate her son’s lust for blood. However, she underestimates a young schoolteacher, Marianne Danielle (Yvonne Monlaur) who, finding the handsome Baron chained in his room decides to free him from his shackles and consequently unleashes a vampire on the unsuspecting village.

The story from now on is standard vampire fare; young women are bitten and become the Baron’s ‘brides’, however the schoolteacher manages to avoid that fate. Luckily, in the nick of time, Van Helsing (Peter Cushing) arrives and without giving too much away, the girl is saved, and it doesn’t end well for the vampires.

So why should you watch this movie if the plot is so predictable? The truth is that although from the first few minutes you know exactly what will happen, (evil will be defeated and good and innocence will prevail) you’re carried along by the charm of the piece, and by the talent of the cast.

Peter Cushing is magnificent as Van Helsing, it’s an exceptionally nuanced performance. Cushing was, in my opinion, grossly underrated as an actor. He gives Van Helsing a depth of character without complicating the narrative with a detailed backstory. He plays it totally straight, there are no sly asides to camera or attempts to get the audience on-side. Van Helsing is a crusader against the curse of vampirism and his portrayal is almost Shakespearian in its intensity. However, it’s more than a one man show. The supporting actors are for the most part equally talented. The Baroness Meinster (Martita Hunt) gave a chilling performance as Miss Haversham in David Lean’s Great Expectations, and she certainly held her own here. David Peel’s Baron is handsome and charming, it’s easy to see how he seduces his victims. And Yvonne Monlaur is an appealing heroine, all be it with a very strange French accent (even more confusing as she was French).

I must admit to more than a slight interest in the vampire genre. I’ve written a series of books called ‘Scouse Gothic’ about a modern vampire called Lee Melville. The ‘Melville’ came from Herman Melville of Moby Dick fame. My character had been a sailor in Liverpool in the 19th Century, and while researching the book I found out that Herman Melville was there at roughly the same time. I’d always assume that ‘Lee’ was simply a contraction of Stanley, one of my character’s previous names. However, as I was writing this it became glaringly obvious to me that it came from a different source, Christopher Lee. I’d tried so hard not to copy Hammer and their template for my vampire, but subliminally the long shadow of Christopher Lee had imposed its will.

To be perfectly honest, the movie cannot possibly be judged by modern standards. It is after all nearly 60 years old, and the stuffed bat on a piece of string will not be the cause of any sleepless nights. But taken purely as a piece of entertainment from a simpler time (when vampires were evils, not troubled or misunderstood) I think its many charms will still captivate a modern viewer.

CHECK OUT MORE FROM IAN McKINNEY AT HIS OFFICIAL AMAZON PAGE, INCLUDING LINKS TO THE SECOND AND THIRD BOOKS OF THIS SERIES.

This entry was posted on May 24, 2018 by Thomas S Flowers. It was filed under Horror, Movies and was tagged with film, gothic, movie reviews, Reviews.