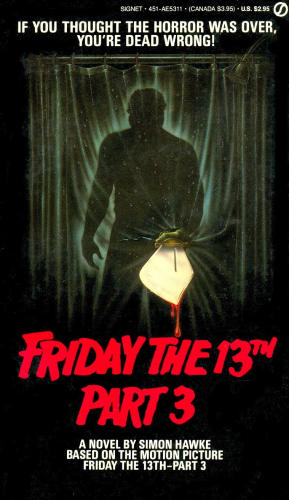 As a horror fan I feel rather fortunate that so many of my favorite thrillers released on the year of my birth. A quick Google re-search will reveal a VHS candy store of goody gore and lovable murderers, from The Thing to Poltergeist to Halloween III (the one without Myers) to Amityville II: The Possession (the one that was like The Exorcist but with incest) to The New York Ripper to Pieces, Parasite, The Slumber Party Massacre, and…Friday the 13th…PART 3 (cue groovy disco music). And among the other entries in the franchise, PART 3 is I would say my second favorite. There are many factors that play into my rating but unless you’ve seen it you probably won’t understand. So do me a solid and go pop this flayed VHS cause this review will be chopped full of SPOILERS. Readers…you have been warned!

“Having revived from his wound, Jason Voorhees takes refuge at a cabin near Crystal Lake. As a group of co-eds arrive for their vacation, Jason continues his killing spree.”

Among many reasons why I love Friday the 13th part III, one would be that it is the first true Jason Voorhees slasher. Yup. Obviously part 1 was really about mommy Voorhees, a character who wasn’t even given a first name until…what, part 2? And while fantastic in its own right, it was not a “Jason” movie, not yet anyway. Now some would say, “But hey, Tommy, what about part 2? Isn’t that considered a Jason Voorhees movie, it does have Jason in it after all?” And I would of course nod my head knowledgeably. Yes, part 2 does have Jason…but not the Jason. What we got was a backwoods deranged potato sack wearing weirdo who at times certainly had classic Jason mannerisms, but in the end still just an inbred acting mongoloid. Now that said, part 2 has its charm and some really excellent kills, but if you want Jason as we love him today (hockey mask and all), you gotta start with part 3. 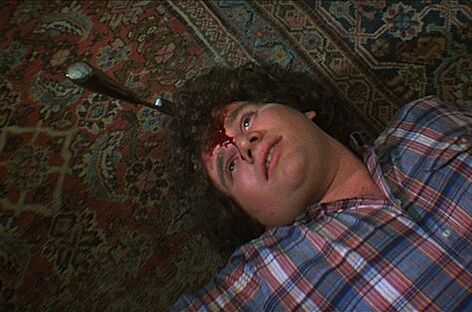 Part 3 is also really awesome because it has what every good indie horror movie should, a cast a unrecognizable actors and actresses. While still young, parts 1 and 2 had some fairly recognizable cast members, including Kevin Bacon, John Furey (a known TV actor), Harry Crosby (son if Bing Crosby), and not to mention the late great Betsy Palmer who was one of the most veteran and highly respected actors on set. Part 3? Nadda. They didn’t even have Chong, of the Cheech and Chong variety, star as the lead stoner, instead they dressed some dude named Chuck in a blue bandanna, green button down, and red pants with not quite as much weed as Up In Smoke.

I’d be amiss not to comment on what PART 3 has no other addition does. Shelly.

Shelly is the best part of this movie. From humble awkward to cartoonish to a astonishingly flamboyant runner, Shelly is still by far my favorite character in the film. Sure, he fails to get the girl Vera and he’s socially immature, who isn’t?!? Shelly does have a fool things going for him. Sweet yo-yo skills and a magic box that is literally “his entire world” full of tricks and gags to annoy the entire gang of friends, and the largest white-boy fro ever shot on a 3D film.  On a low par, I wasn’t all that thrilled with leading lady Chris Higgins (Dana Kimmell).  She seemed too annoyed at times. Bored. And too drawl. The best part about her, I thought, was her really strange back story of a previous “unfilmed” encounter with Jason Voorhees. An encounter that sounded almost as if it were some kind of sexual assault. Going back to the amazing documentary Crystal Lake Memories, actress Dana Kimmell confirms this backstory, but she says that producers did not want to pursue it in any kind of depth. This revelation is kinda dark for a Friday the 13th film as they typically follow a blood, guts, and gags methodology.

So, we’ve covered the more manly killing machine Jason. We got the actors. Next is the music. Harry Manfredini, who scored most of the Friday the 13’s, including the original, crafted one hell of a soundtrack for this third installment. Part disco, part horror, 100% awesomeness. It is also one of the few, if not only, horror sound track to garner its own cover band by the name of Nilbog. Check them out on YouTube. Link provided below.

But like any horror slasher flick, there’s gotta be a seemingly solid foundational plot. In PART 3, Chris Higgins invites a gang of friends to include a pregnant bestie (who gets slaughtered later btw…also a very dark moment for a Friday the 13th movie), two stoners, a Mexican chick, and Shelly. They met up later with lurch looking boytoy Rick (Paul Kratka). Events escalate into a series of weed smoking, beer drinking, skinny dipping, practical jokes, and heartfelt life lessons until Shelly and Vera end up pissing off a low-level biker gang. After Shelly runs over some of their motorcycles, the b-squad gang vows revenge that never really materializes. Instead, after following Shelly and Vera back to the cabin, they are quickly dispatched by Jason.

After Chris goes off with Rick to blow off some steam, the night consummates in more weed smoking and beer drinking, a sexual encounter, and Shelly in a wet suit. I know, sounds amazing doesn’t it? Where does all this debauchery go? To one of the coolest kills. Once Shelly is dispatched, Jason finally obtains his moniker look by putting on the hockey mask that Shelly was so kind enough to bring along. Jeez, imagine if he brought a faded Captain Kirk mask? Talk about a lawsuit! Anyways, with Jason now complete, he causally strolls out on to the deck where a waiting Vera is fishing for Shelly’s dropped wallet on the edge of the lake. He aims at her, much to her confusion, as she thinks he’s Shelly. Just as she says, “Wait…who are you?” Jason pulls the trigger on the speargun popping her eye out the back of her head. Simply amazing. Its the small things folks.

More killings ensue until finally Rick and Morty…oops, Rick and Chris arrive back at the cabin. With everyone gone and blood everywhere, it doesn’t take a rocket scientist to put two and two together. During the attack, ole handsome lurch Rick gets his eyeball popped out his socket, which must have been a real thrill for kids who matched this back in 1982 in 3D. And finally Chris and Jason go toe to toe. During the struggle, one of the surviving bikers revives just to be killed again, but distracting Jason long enough for Chris to throw a noose around Jason’s neck and shove him out the barn. When that proves useless, she plants an ax deep in his skull. That seems to have done the trick and as the credits roll, the cabin is surrounded by police and paramedics.

For me, my horror appetites are not hard to please. And PART 3, given some of its flaws, is a groovy good time for a slasher flick, and especially a Friday the 13th slasher flick.

Who doesn’t love a good story? From great works such as, All Quiet on the Western Front and Salem’s Lot, Thomas S. Flowers aspires to create his own fantastic worlds with memorable characters and haunted places. His stories range from Shakespearean gore to classic monsters, historic paranormal thrillers, and haunted soldiers. Residing in the swamps of Houston, Texas, with his wife and daughter, Thomas’s debut novel, Reinheit, was eventually published with Shadow Work Publishing, along with The Incredible Zilch Von Whitstein, Lanmò, The Hobbsburg Horror, FEAST, and PLANET OF THE DEAD. His veteran focused paranormal thriller series, The Subdue Series (4 books and counting), filled with werewolves, Frankenstein-inspired monsters, cults, alter-dimensional insects, witches, the undead, and the worst monster of all, PTSD, are published with Limitless Publishing. Follow Thomas on his website and get yourself a free ebook copy of FEAST at www.ThomasSFlowers.com. 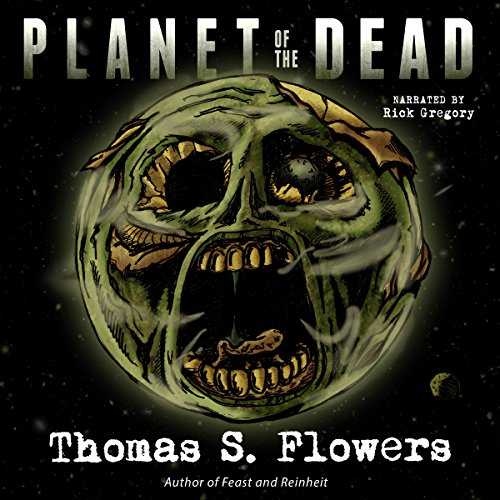