This is not a slasher film. And technically it’s less about the serial killer than the people trying to catch him. Zodiac (2007) is an obsessively created film about an obsessive hunt for the obsessive Zodiac Killer, by the director of one of the most successful serial killer films of all time. So how does David Fincher’s first “horror” movie since Se7en stack up?

Zodiac is a personal favorite of mine. I’d say it’s in my top ten films of all time. I’ve seen it at least five times and it’s almost three hours long. That’s a good chunk time for someone who won’t give mediocre movies more than ten minutes.

If you’re not familiar with the Zodiac Killer (not sure how that’s possible, but hey, there are people who think Earth is flat), he was active in Northern California from the late ’60s to the early ’70s, with five confirmed victims, possibly more unconfirmed. A glimpse over his Wikipedia page shows the Zodiac’s infamy has permeated pop culture since then, with dozens of references in books, music and even video games. More than seven films have been made about his crimes, including Dirty Harry (which features in this

film, although in the Clint Eastwood vehicle he’s renamed “Scorpio”). For a killer with such a small body count, I believe he was mostly able to command so much fear and achieve such long-lasting infamy by sending cryptic letters to the press—often featuring complicated ciphers and death threats.

Second only to Jack the Ripper, he is one of the few actual “taunting serial killers” that led to that tired cliché being trotted out on every police procedural for the past forty years.

So, to the movie itself. It starts out pitch perfectly. A long tracking shot across a residential neighborhood, reminiscent of Orson Welles’s Touch of Evil. Fireworks during the magic hour. The haunting and melodic “Easy to Be Hard,” by Three Dog Night. The music, cars, fashion and setting place it in the late-’60s. A young woman gets into a car driven by a young man. They head to a make-out spot on Lake Herman Road. He’s nervous. Headlights spotlight the car. The vehicle drives by, leaving them shaken but ready to continue with their evening.

The car returns. The driver claims to be a police officer, hidden in silhouette from his headlights. While Donovan’s “Hurdy Gurdy Man” blasts on the soundtrack he shoots them both. The woman dies. The man survives. This brutal scene is followed by the Zodiac’s phone call to the police, confessing to the murders.

A month later the San Francisco Chronicle gets a letter from the “Zodiac” including a cipher. Cartoonist Robert Graysmith (Jake Gyllenhaal) is a whiz with puzzles and it piques his interest. After a few more killings he meets with crime reporter Paul Avery (Robert Downey Jr.) and tells him that the “most dangerous animal of them all” from the latest letter is a reference to The Most Dangerous Game, a film (first a short story, a classic that—along with Fincher’s The Game—inspired my novel The Method) about a rich man who hunts men for sport. 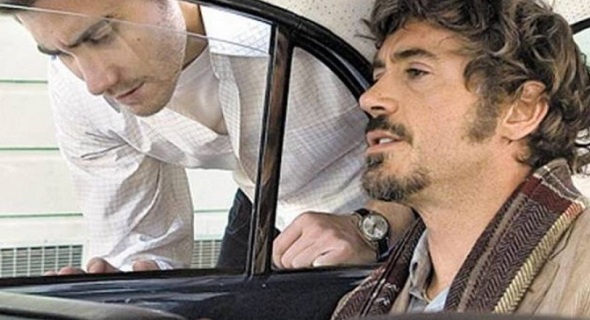 From there, Avery begins to take Graysmith seriously and they form an unlikely bond over the investigation.

This partnership doesn’t lead anywhere pleasant. The case takes many bizarre and unlikely twists and turns, with Arthur Leigh Allen becoming the top suspect due to his odd behavior in an and his Zodiac wristwatch—which has the same symbol the Zodiac uses to sign his letters as its logo—and promptly cleared by a pompous handwriting expert played by Philip Baker Hall. Meanwhile the Zodiac claims another victim and the obsession with finding him takes over every facet of their lives. Graysmith’s marriage falls apart. Avery drowns in substance abuse.

Although this is a near perfect film—every detail obsessed over by Fincher, every line of dialogue razor sharp while also propelling the story toward its ambiguous climax—several scenes standout more than others. The killing at Lake Berryessa in Napa County is high among them, the calm way the Zodiac toys with his victims and how the law student tries to talk his way out of it, while we in the audience know there is no escape, the Zodiac kept mostly out of shot throughout. It’s a tense and violent scene with surprisingly little blood—yet it sticks in my mind as nearly as gruesome as one of the most brutal scenes in Fincher’s Se7en, set in the sex dungeon.

There’s a terrific scene of suspense when Graysmith visits the home of the organ player from an old repertory theater he believes the Zodiac may have created posters for. After

allowing Graysmith in from the rain and sitting him down for coffee, Bob Vaughn (played by the ultra-creepy Charles Fleischer) claims to have created and lettered the posters himself. It’s clear Graysmith realizes he’s in over his head when Vaughn invites him to the basement. Zodiac’s letters implied he lived in a home with a basement, rare for California—a fact Graysmith seems to think aloud.

The framing of Graysmith through the basement doorway perfectly illustrates his character’s paranoia even without Gyllenhaal’s meek, fearful expression. He knows he should run. We know he should run. And yet he follows Vaughn to the basement, his obsession too overwhelming to do anything else, even if it means his death. When footsteps creak on the floorboards above his head, the dread is thick enough to taste. The lighting, the camera movements, the dust falling from cobwebs on the floorboards, the sound design—everything screams “Get out!” And when he finally does run, only to find the front door locked…

That scene gives me chills every single time.

I’m sure it comes as no surprise that I feel Zodiac is a masterclass in filmmaking on just about every level, from the script all the way to the soundtrack.

I won’t spoil the ending for those who haven’t seen the movie. We all know the Zodiac Killer was never caught. He simply stopped killing. Whether he was caught for another crime, died, nobody knows. The main character Robert Graysmith, who also authored the true crime book this film is based on, believed in his core Arthur Leigh Allen was the Zodiac. What Fincher and screenwriter James Vanderbilt give us is the most satisfying ambiguous ending put to film.

There’s a reason Zodiac is mentioned on many undiscovered classic and critics top ten lists. It was nominated for the Palme d’Or at Cannes along with many other awards but was snubbed by both the Oscars and Golden Globes (further proof those particular awards are mostly a sham). If you haven’t seen it, do yourself a favor and check it out.

And if you have seen it, I’d love to know what you think about it.