These holidays (F13) are so few and far between, I couldn’t resist saying a few words about one of my all time favorite horror movie franchises. As a younger fan of the slasher genre, I watched more of Nightmare on Elm Street. In a way, i think that’s because Freddy is more “kid stuff,” especially the flicks starting with part 3, aka Dream Warriors. It became more and more of a build up to those sweet one-liners, such as: “Wanna suck face?” or “How’s this for a wet dream?” or “Welcome to prime time bitch!” and then breaking into that cackling laughter whilst the soon to be dispatched teen flees for however many seconds of life they have left. Good times. But i think it was around 1994-95 when my allegiances changed when Jason Goes to Hell released to VHS. Somehow, one of my buddies (Matt) was able to get his hands on a copy. Fangoria was still really popular back then too and they had done a full spread on the movie. Needless to say, from that moment forward, my slasher heart belonged to Jason Voorhees.

“You see, Jason was my son, and today is his birthday…”

I cannot say when my first screening of Friday the 13th (1980) was. Whenever it was, i’ve seen it many many times since. In fact, on most Friday the 13th calendar days, i do my upmost to watch it again. Friday the 13th (1980) isn’t my favorite of the hockey wearing high body count flicks within the already 12 film deep franchise. It is and it isn’t because it doesn’t have Jason. Honestly, it really just depends on what mood I’m in. Feel like watching teens getting killed on a boat? Watch part 8. Feel like watching teens get murdered at an actual working camp with kids and some hardcore gothic vibes and a badass soundtrack? Watch part 6. Want to watch Jason in space? Well, too each their own, part X would be your bag. Speaking of bags, in the mood for Jason without the mask? Watch part 2. etc. etc. Part 1 is a lot like this, for me, i have to be in the mood to watch it. That doesn’t mean i don’t like it–not at all, part 1 is a freaking classic flick and a must watch ritual for any Friday the 13th calendar day.

The fact that Friday the 13th started as a very basic concept–a slasher built around the day, Friday the 13th (hence all the smashing glass in some of the original trailers) and then grew past that, creating it’s own definition for the phrase “Friday the 13th” is a testament to Sean Cunningham’s success in bringing the Man Behind the Mask to life. I for one cannot hear “Friday the 13” and not think about the movies or the star attraction, Jason Voorhees. Though interesting enough, the first film had little to do with Jason, it was really all about his mamma wanting revenge and to keep the camp closed, in her own strange way, memorializing the place her son had drown. I seriously doubt when Sean Cunningham, Ron Kurz, and Victor Miller sat down to pen this movie they would have believed it would spawn twelve additional movies. And we’re still waiting on that 13th–cursed as it may be.

“You let him drown! You never paid any attention. Look what you did to him.”

The music and tone are a major signature of the film. Excellently adapted too, as Freddy as his stringy piano melody, Friday the 13th, which would eventually become Jason’s trademark, was unique. The only other movie that comes to mind with a tune that signifies the proximity of the killer is Jaws. Harry Manfredini is the genius behind the cha-cha-cha (which apparently was a recording of a line “kill mommy, kill” played over top itself) bit and the slowly paced tunes. His best work was on Friday the 13th part 3 with that disco vibe soundtrack. When that soundtrack plays, not only do you know its a Friday the 13th, but you also know its a Friday the 13th part 3, which is an important part in the series as that is when Jason gets his mask. Friday the 13th (1980) also set the stage for some really impressive practical effects. And not just any effects, but Tom Savini effects. This was def. an era for Savini, just coming off a huge project with Dawn of the Dead and then landing this gig, talk about building a career. Compared to later down the road F13s, some of the kill shots are held back and spread out with less is more gore, but some deaths are very well placed, enough so to be very memorable, namely the arrow-tip through Kevin Bacon’s throat or the beheading of (SPOILERS) Mrs. Voorhees. So if you’re itching for a time of the year to honor such an epic film, my money would be today, on Friday the 13th.

Who doesn’t love a good story? From great works such as, All Quiet on the Western Front and Salem’s Lot, Thomas S. Flowers aspires to create his own fantastic worlds with memorable characters and haunted places. His stories range from Shakespearean gore to classic monsters, historic paranormal thrillers, and haunted soldiers. Residing in the swamps of Houston, Texas, with his wife and daughter, Thomas’s debut novel, Reinheit, was eventually published with Shadow Work Publishing, along with The Incredible Zilch Von Whitstein, Lanmò, The Hobbsburg Horror, and FEAST. His veteran focused paranormal thriller series, The Subdue Series (4 books and counting), filled with werewolves, Frankenstein-inspired monsters, cults, alter-dimensional insects, witches, the undead, and the worst monster of all, PTSD, are published with Limitless Publishing. Get a free book today, visit www.ThomasSFlowers.com for details! 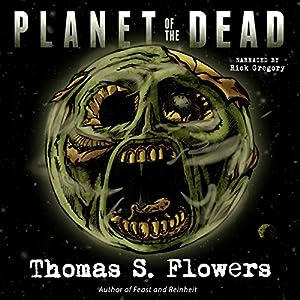 This entry was posted on April 14, 2018 by Thomas S Flowers. It was filed under Horror, Movies and was tagged with 1980, film, Friday the 13th, Horror, horror movies, Jason Voorhees, movie reviews, Pamlea Voorhees, Reviews, slashers.