Tonight we take a look at one of the big four.  I mean, really, when one hears the word SLASHER, four characters jump to mind, right? Freddy Krueger, Michael Meyers, Leatherface and of course, Jason Voorhees.

There are countless other stalker killers out there, but for some reason, these four are synonymous with the word slasher.  It doesn’t seem to matter that there were slashers before and after these classics were made, these are the Grandaddies of the slasher family. Take it or leave it.  One might make a case for Chucky, The Firefly Clan and others, and while terrifying and time-tested, in my opinion, Chucky has become a lampoon of himself and The Fireflys were only in two(?) movies.  That’s not to say that Jason and Freddy haven’t become parodies either, but that’s a topic for another day.  Today we talk about the birth of all things Camp Crystal Lake and why teenagers of the 80’s didn’t want to go to camp.

Our story begins in 1958 at Camp Crystal Lake. A group of counselors are singing folk songs and two of them sneak off for some “ahem” alone time.  Thus begins the “Death Curse.”  They of course are dispatched by a merciless unseen assailant.

Next we meet Annie (Robbi Morgan), a cute brunette who is hiking her way to CCL. She stops in the small town closest (20 miles) to the camp to ask directions, first to a dog, then in a cafe.  It makes all the customers stop.  They are clearly against the camp reopening.  But a kindly truck driver gives her a ride about half way.  On the way to the truck we meet Crazy Ralph (Walt Gorney), who gives Annie a doomsday warning to not go to the camp, calling upon the Death Curse.  Even the trucker (Rex Everhart) tries to get her to change her mind, but Annie says she can’t quit. He drops her and she gets a ride in a jeep.

We are never shown the driver, who proceeds past the road to the camp. Annie begs her to stop before jumping from the moving jeep.  We hear the jeep stop and back up as Annie on a hurt leg runs into the woods. She is chased by the unseen assailant before we see her throat cut.  Poor Annie, who always wanted to work with children, not kids.

Meanwhile, at the camp,  Alice (Adrienne King), Marcie (Jeannine Taylor), Jack (Kevin Bacon), Bill (Harry Crosby), Brenda (Laurie Bartram), and Ned (Mark Nelson) are working with Steve Christy (Peter Brouwer), the owner of the camp, to get it set up for the upcoming summer camp.

Steve leaves for supplies in a jeep(!) and then the real fun begins.

In quick succession, the bodies start piling up. Jack and Marcie have sex, completely unaware that Ned had been killed. Marcie leaves to go to the bathroom.  Jack gets an arrow through the throat, from underneath. This is another of the fairly gory deaths, keeping in mind that we know that Ned is dead, but we never saw his murder.  Marcie is dispatched in the bathroom with a hatchet to the face.

Alice, Brenda and Bill are playing strip Monopoly, and just before we get any t&a, the door blows open, scaring them and blowing the money and such off the table, leading to Brenda heading off to bed. She, of course, is killed.  Steve returns to camp and is killed.  Bill is arrowed through several times to the outside of the generator room door.  This leaves Alice and the killer, who turns out to be…(drum roll please.)…the insane mother of a child who died at CCL in 1957, nearly 25 years before the events of this movie.  Alice is chased around the camp by Mrs. Voorhees, ultimately ending on the beach, ultimately beheading Mrs. Vorhees. Alice get in a canoe, clearly in shock, and floats off into the lake. She wakes to the police shouting to her from the shore.  She sits up, and Jason himself comes from the lake and drag her in.  She wakes in the hospital, and is told that she was dragged out by the police. She asks about the boy, Jason. The police chief tells her that they didn’t find  boy. The last line in the movie, which completely opens up for the sequel, is Alice looking glassy eyed saying “Then he’s still out there.” 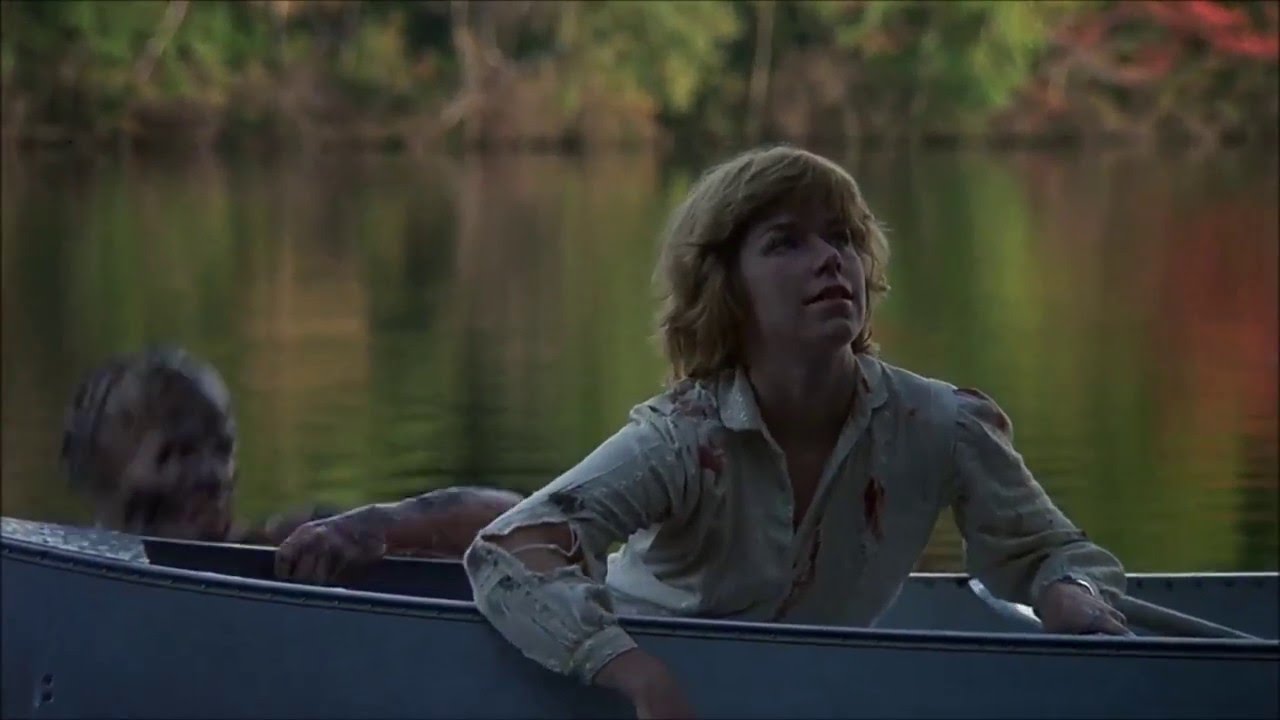 This is clearly a classic film.  From Manfredini soundtrack, including his voice being the iconic “ki ki ki ma ma ma.” to the fact that most of the murders are not seen, this is an artistic masterpiece.  The low budget film directed by Sean S. Cunningham really paid homage to earlier horror films including Psycho, Halloween and the Texas Chainsaw Massacre is the sense that there is very little gore, and the murders are mostly offscreen.  I think it is very ironic that several of the cast and crew dislike any of the sequels as in their eyes, Jason is in the bottom of the lake, dead for 23 years. The killer of Crystal Lake is clearly killed at the end of the last act.  This movie faced many criticisms including misogyny, hate that the killer is a woman, etc.  But that the original movie in a series that includes nine (plus)  sequels and reboots still has the staying power that it does is a testament to great writing and direction from Victor Miller and Sean S. Cunningham.

Well, that about does it for me, but remember…they never found the body.