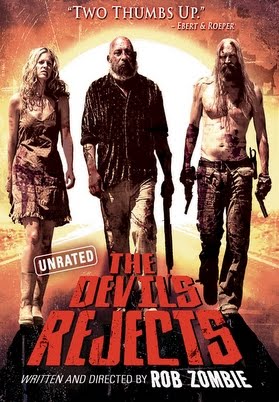 Rob Zombie knows movies, and he takes his knowledge of and passion for film and applies it to his own projects.  Sometimes he is successful in his execution, sometimes he isn’t.  It all boils down to personal preference.  When it comes to The Devil’s Rejects, I believe he was successful.

This film came out in 2005 and is the follow-up to House of 1000 Corpses.  It follows the Firefly family as they attempt to escape the law.  The film is a mash up of different genres, including crime films and sexploitation, drawing heavily from slasher films with murder and gore to beat the band.

When slasher films first hit the big screen, they were condemned by critics, church groups, and parents as overly violent, glorifying murder, and misogynistic.  Zombie has taken all of these aspects and magnified them, showing the depravity of the main characters and how there is no chance they can be saved, as is also typical of the slasher genre.

Zombie also has a tendency to overemphasize elements in his films, particularly

violence, which doesn’t always sit well with audiences.  But that is the point.  Zombie’s goal is to make people uncomfortable and to feel squeamish—and he accomplishes that with The Devil’s Rejects.

The most famous slasher killers—Jason, Mike Myers, and Freddy Krueger—can’t be reasoned with or stopped.  Hell, they can’t even be killed!  And they murder without mercy in the most gruesome ways.  The Firefly family is trying to secure their place in the timeline of heartless slasher killers, and they are pretty successful in their endeavor.

A lot of the techniques Zombie incorporates into his film, including attempting to make the killers sympathetic, are not new to the slasher genre.  These films pushed boundaries and audience expectations.  Using first-person camera techniques, the audience often sees the action unfold through the eyes of the killer.  We watch and stalk and kill the victims as if we were Freddy, Jason, or Mike.  We share the killer’s point of view.

But it’s also traditional in slasher films that at the end of the film, the audience gets to share the point of view of the Final Girl.  The audience goes from being the killer to being the survivor and doling out justice.  Zombie did not neglect to include these elements in The Devil’s Rejects.

Zombie doesn’t necessarily employ first-person angles in The Devil’s Rejects, but he uses a lot of close-ups.  This achieves the same goal of putting the audience in the middle of the action and making them feel like they are right next to the killers and their victims, making us voyeurs and participants in the violence on screen.

Slasher films reached their height of popularity in the 80s.  After that, they declined, then there was a resurgence in 1996 when Scream hit the theaters.  This movie re-imagined the slasher, such as making the teens a little smarter and having the killer be a teen, but it kept a lot of the original elements, such as having teens die in horrific fashion.

Slasher films then evolved from there with a drive to understand the killer and explore his motive for why he kills.  The idea was to make them more sympathetic, to make the audience relate to them on a different level.  Zombie knew all of this when creating The Devil’s Rejects (and even goes on to remake Halloween, emphasizing Mike’s childhood and how it shaped him into a killer), and his characters and the audience fall right into the trap.

No matter how the film presents itself and how much back story we get into the killers’ troubled past, they are still killers.   They are unmerciful, brutal, deceptive, and evil—and that is the point Zombie drives home with The Devil’s Rejects.

The first half of the film shows us how awful the Firefly family is.  We are taken back to the house where torture and murder occurred.  We see their work in the naked corpses of their victims as they are dragged to an unmarked grave in the woods.   Things don’t get better from there.  Baby and Otis escape into the world and find other victims to torture and kill—in gruesome and unrelenting fashion.

But, as I mentioned, the “new” slasher film wants to show that the killers aren’t as horrible as they appear to be.  They can be sympathetic.  They can have human

qualities.  This technique proposed the idea that perhaps there’s a chance they can be saved and see the error of their ways.  Or at least they’ll be able to feel what their victims felt before dying and justice will be served.

No matter how brutal the family is to other people, however, they stick together to watch each other’s backs.  They show moments of being almost human instead of monsters, a point that is further emphasized when they are captured by Sheriff Wydell.  He plans to enact his own form of justice.

However, we quickly learn that if you are going to venture into the realm of unrelenting killer, you have to be willing to go all the way—a detail the sheriff struggles with since he has to draw courage and support from a bottle of whiskey to go through with his dastardly deeds.  The Firefly family doesn’t require the same enticement to kill and maim.  And, as we find out, they can’t be reformed or made to feel bad about their deeds.

The violence, senseless killings, and unrelenting killers in The Devil’s Rejects allows it to be placed in the genre of slasher films, and it incorporates many of the expected tropes, although it also deviates from some of them (especially the killers using guns; traditionally, slasher killers never dispatched of their victims with guns).  It magnifies and overemphasizes the violence, but slasher films have always pushed the boundaries of horror and violence.  If you are a fan of the slasher genre, you will recognize the extreme levels this film takes the genre to.

I am a huge fan of slasher films and thoroughly enjoy the social issues they attempt to tackle.  Of course, no one usually learns the lesson because they end up dead, but that just shows how flawed the system is.  Traditionally, the goal of slasher films and the killers was to show teens how dangerous sex and drugs can be.  In The Devil’s Rejects, the goal isn’t to show teens the error of their ways, but to emphasize to the rest of society how dangerous it can be to trust strangers.  Once again, this lesson doesn’t sink in because people die.

This film is worth watching at least once.  I have no doubts the characters and the film will stay with you in one way or another.  You get to decide if that’s good or bad.

Did you enjoy the review? For more from Pembroke Sinclair, check her out on Facebook or Twitter. Take a look at her books at her Amazon author page and check out more of her work at her blog!

This entry was posted on March 30, 2018 by Chad A. Clark. It was filed under Horror, Movies and was tagged with guest contributor, Horror, movie reviews, Pembroke Sinclair, review, Rob Zombie, serial killers, slashers, The Devil's Rejects.