I had the basic plot idea for Literary Stalker – a bad writer with grudges who takes revenge on selected colleagues – many years before I wrote the novel, but it remained on the back burner because it seemed too simplistic. Then I had the further idea of making the work a pastiche, with showcased references to films and other novels, very much in the style of Quentin Tarantino. Having fun developing this, one film in particular popped into my mind – one I hadn’t actually viewed for decades, but which I remembered fondly from way back in the 1970s and ’80s. It was Theatre of Blood, and I got the DVD and re-watched it, several times. The rest, as they say, is history.

The blueprint of a vengeful actor, dispensing justice to the critics who’ve disparaged him, using Shakespeare’s plays, matched my idea; but rather than simply copy or steal it, I decided to feature the film itself as part of my narrative, and have my vengeful writer, Nick Chatterton, ‘steal’ the idea for his ongoing novel-within-the-novel, The Facebook Murders. So my creative processes, and my own love for Theatre of Blood became Nick’s, and within the text I could articulate all that and show Theatre of Blood as the feed for the developing Facebook Murders – where another vengeful writer, Jago Farrar, actually murders critics and others writers, according to the plots of famous horror and crime movies, such as Reservoir Dogs, rather than Shakespeare. It also helped to cement the Russian doll, metafictional idea of novels-within-novels-within-novels endlessly propagating.

So, what is it we love about Theatre of Blood, and how come that movie has stood the test of time better than a lot of British 1960s and ’70s horror, some examples of which can now seem laughably dated and hackneyed? The answer first and foremost, I think, is that the film is essentially a comedy – a very black comedy for sure, but also a very successful one, where the thick irony and obvious tongue-in-cheek approach to everything works perfectly. To quote a line from a film critic friend of mine, the late Mike Sutton: ‘It never makes the mistake of being remotely realistic or credible, relying instead on outrageous hamming, genuinely witty dialogue and deliciously bloody murders to keep the critical faculties at bay.’

Of course, the centrepiece of the film is Vincent Price’s performance, and he’s on the record for regarding Edward Lionheart as his favourite role. Really, it’s an apotheosis of everything he had done before, drawing on his slightly camp and sometimes comedic horror turns, and using them to play a dubious actor as only a really good actor could. In fact, Price started his career on the stage, and did Shakespeare – and also got his share of poor reviews! You can see that he relishes the role of Edward Lionheart, that it’s in his blood, and it gives him so much scope for his versatility as an actor, playing roles-within-roles.

As Nick says in Literary Stalker: ‘He gets to dress up as Mark Antony, Achilles, a gravedigger, a surgeon, Shylock and Richard III – with putty noses and Pan-Cake makeup – and as gay hairdresser ‘Butch’ with a ridiculous Afro wig. And he gets to murder some of Shakespeare’s most famous lines whilst taunting the hapless critics in their death throes. The actual murders are satisfyingly gruesome and nicely orchestrated, though not realistic enough to evoke proper visceral horror. Arthur Lowe gets drugged up and decapitated, with wife Joan Hickson waking to find him, as Imogen does in Cymbeline. Coral Browne is electrocuted with hair curlers by ‘Butch’, evoking the burning of Joan of Arc in Henry VI, Part 1. Robert Morley, playing a stereotypically effeminate gay, is tricked into eating his treasured pet poodles baked in a pie, in the manner of Queen Tamora in Titus Andronicus, before being force-fed to death. And Ian Hendry almost gets his eyes put out by red-hot daggers on a trolley moving on rails, an idea adapted from King Lear, of course.’

Lionheart can be creative as he kills, express himself as he practises his art, and turn the tables on his enemies with an overload of heavy irony. What’s also particularly good is the way he gets to throw back the critics’ disparagements of him as he dispatches them: ‘My Shylock was inadequate – that is the adjective you used, I believe: inadequate?’ And in the flashback scene, when he confronts the whole critics circle, he really let’s rip over the award he was denied. They deliberately withheld it from him, he says, and humiliated him before press, public and peers – the culmination of their determined denial of his genius!

All the pent-up bile of years of under appreciation for an artist whose ego far overtrumps his talent is unleashed in a peerless tirade from Price. Because of the way he plays the role, we’re made to understand and sympathise with Lionheart’s distress, so that the dreadful punishments he inflicts for only moderate offences seem totally justified; and we’re utterly on Lionheart’s side as the critics get their just desserts. Actually, the movie treads a difficult line, and could have easily tipped too much one way or the other, but it stays beautifully on course.

The supporting performances are also excellent, with a fine ensemble of British actors who were well known in 1973 – Michael Hordern, Jack Hawkins, Arthur Lowe, Dennis Price, Robert Morley, Harry Andrews, Coral Browne and Ian Hendry, together with Diana Rigg as Lionheart’s doting daughter and accomplice, and Milo O’Shea and Eric Sykes as the bumbling slow-on-the-uptake cops on the case. The special effects are pretty good too, considering the limitations of the era and the budget, and some of the scenes are fairly graphic for even a black comedy. Six gallons of Kensington Gore fake blood were used in staging the murders, quite impressive if a little too bright to be totally convincing.

It’s unsurprising that Theatre of Blood has proved enduringly popular, and it certainly resonates with later slasher films incorporating themed murders, and much darker serial killer movies such as David Fincher’s Seven, and also serial revenge films such as Tarantino’s Kill Bill pair. In the field of comedy too it has its fans, including The League of Gentlemen crew – Mark Gatiss, Reece Shearsmith and Steve Pemberton – and elements of the film can be seen in their horror-comic style, and also in the later series Psychoville.

Finally, if someone or some group of people have crossed you, and you fancy a bit of vicarious revenge, there is no better movie than Theatre of Blood to pull off the shelf (or stream) in order to satisfy those urges, as Nick Chatterton does in Literary Stalker. But don’t get so into it, you cross the line and start doing it for real, like Nick…be careful of that now, folks…

Roger Keen was born in London and attended art colleges in Plymouth and Bournemouth before pursuing a career in television. He began publishing fiction and non-fiction in the 1990s, specializing in noir short stories and articles and reviews concerning genre film and literature. He has a particular interest in the Surrealists, the Beat writers, 1960s psychedelia, cyberpunk and weird cinema.

Roger’s short stories have appeared in magazines such as Psychotrope, Threads, Sierra Heaven and Flickers ’n’ Frames; and his non-fiction has appeared in anthologies and magazines including Out of the Shadows, the PsypressUK Journal, Critical Wave, Writer’s Monthly and The Third Alternative. He also contributes to websites such as Reality Sandwich, The Digital Fix, The Oak Tree Review, Infinity Plus and The Zone.

Roger’s counterculture memoir The Mad Artist: Psychonautic Adventures in the 1970s was published in 2010. It is both an odyssey of druggy excess, in the tradition of Fear and loathing in Las Vegas, and a piece of experimental ‘reality fiction’, exploring the interface between autobiography, fiction and metafiction. The recently published Literary Stalker takes these elements further within the framework of a psychological horror/crime novel. Roger is currently doing research for a book on weird cinema, and when not writing he makes short films and likes mountain walking and skiing. 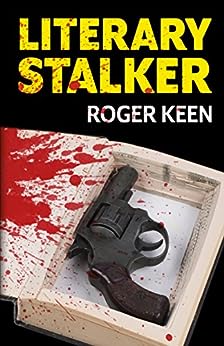