Well, here we are.  Six years after Nancy defeated(?) Freddy, and a new batch of crazy(!) teenagers for our favorite undead serial killer to torment when their eyes close. Heather Langenkamp and John Saxon reprise their roles as Nancy and Lt. Thompson (from ANOES) and we find that Nancy has gone to school to become a psychiatrist making groundbreaking work in “Pattern nightmares.” This was the directorial debut of Chuck Russell, who would go on to direct the cult favorite The Blob remake, as well as Jim Carrey’s comedy The Mask.  Based on a story by Wes Craven and Bruce Wagner, the screenplay was written by Wagner, Craven, Russell and a young upstart writer named Frank Darabont (I hope I don’t need to remind this crowd who HE is, do I?)

As I said, there is a new cast of teenagers to be led to slaughter by Freddy, including Kristen (Patricia Arquette), Kincaid (Ken Sagoes), Joey (Rodney Eastman), Taryn (Jennifer Rubin), Phillip (Bradley Gregg), Will (Ira Heiden), and Jennifer (Penelope Sudrow).

We start the movie with Kristen, who is building a paper Mache model of a dilapidated version of 1428 Elm Street, the house that Nancy (ANOES) and Jesse (ANOES2) lived in. Kristen is clearly trying to keep herself awake, eating instant coffee granules and drinking diet coke.  She turns up her radio and we are serenaded by Dokken’s Into the Fire.  Her mom, Elaine (Brooke Bundy) storms in, clearly angry and turns off the music, and makes Kristen go to bed.  We discover that mom has a “guest” and clearly Kristen should be asleep.  Kristen goes to sleep…and wakens in front of the clearly destroyed house she is building in her room.  There are children jumping rope in the front yard, singing the One Two Freddy’s coming for you chant.  Kristen walks up to the house and a little girl on a tricycle asks her name.  She then rides into the house.  Kristen follows, and we see the absolutely creepy and disturbing insides of Freddy’s new home.  Kristen ends up in the basement(?) where the girl on the tricycle who informs us that “This is where he brings us.”  Fires ignite, we see skulls and bones in the furnace.  There are sounds from upstairs and the little girl states the obvious.  “Freddy’s Home.”  Kristen picks up the girl and starts running, and when the floor becomes mud (or chocolate or pudding,) she can’t move. Freddy almost gets her but she is able to move at the last second.  She runs, still holding the girl, until she ends up in a room full of bodies hanging by nooses.  The girl says, “Put me down, you’re hurting me.”  Kristen looks down and screams as she sees a tiny desiccated body.  She continues to scream and wakes in her bed.  She goes into the bathroom, and attempting to turn on the sink, the handle becomes a hand and grabs her.  Freddy appears in the mirror, and as Kristen struggles to get away from the hand, the other handle becomes a hand with blades, and it slashes Kristen’s wrist.  Her screams finally get her mother’s attention and when she opens the bathroom door, Freddy disappears and there’s poor Kristen holding a razor and bleeding before passing out. 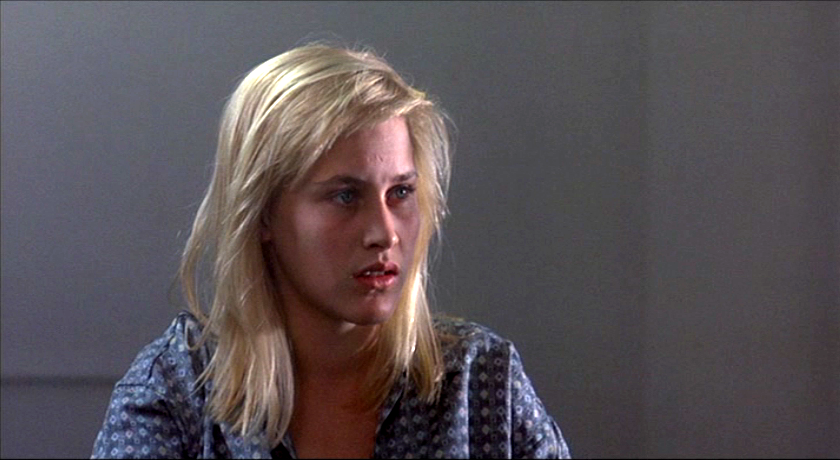 The next scene begins at the Weston Hills psychiatric hospital. We meet Dr. Neil Gordon (Craig Wasson) and the orderly, Max (Laurence Fishburne) discussing the recent rash of teenage suicides.  Max blames it on the kids’ parents doing LSD in the 60’s.  (Ironically, it does have to do with their parents, but not genetically.) They walk down the hall past Taryn, who doesn’t respond to Neil’s questions.  Then we meet Jennifer who asks Neil if she’s close to having a cigarette as she hasn’t burned herself lately.  Neil responds, “Don’t hold your breath.”  Neil pauses to look in on a boy in a padded room who is there because of his violent outbursts.  Neil is joined at the door by Dr. Simms (Pricilla Pointer) and they discuss the new staff member, an upstart grad student who has made progress with nightmare research. Neil is not happy with someone using “his kids” to advance their research.  Neil and Simms are paged to the examination rooms.  They pass Elaine telling a nurse that Kristen’s problem is simply a cry for attention.  In the exam room, Kristen is screaming, and kicks Neil when he tries to sedate her.  She cuts Max with a scalpel before starting the Freddy chant.  She gets to the last line before she cannot finish it.  It is finished by Nancy who comforts Kristen and takes the scalpel and gives her a hug. Nancy and Neil talk about the kids, and we learn that Nancy takes a medication (later to be shown as a dream suppressant.) 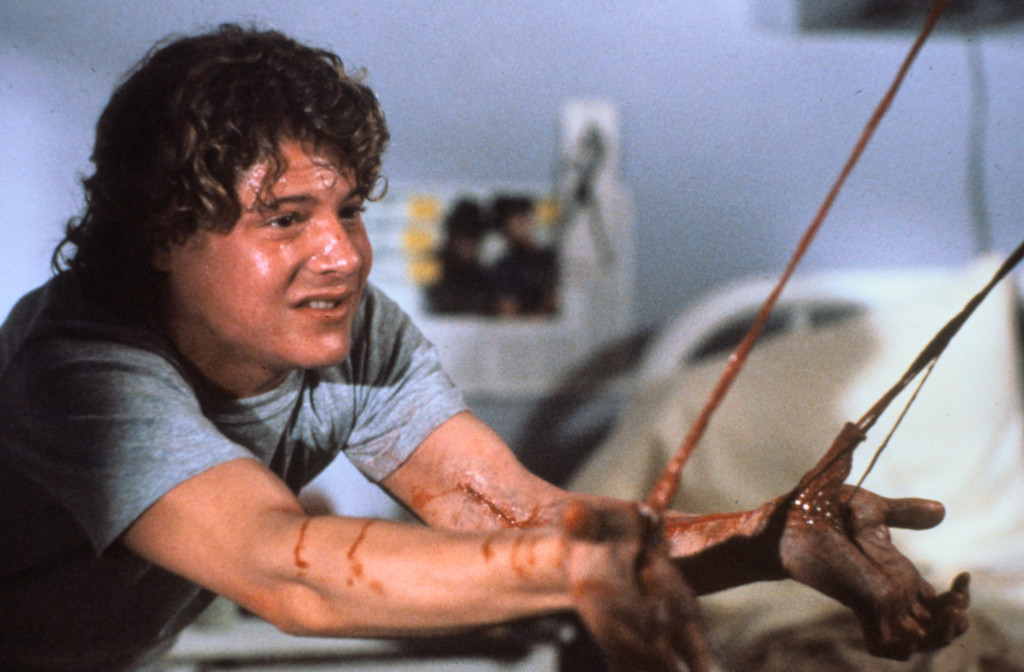 Freddy attacks Kristen again, but Kristen is able to pull Nancy into the dream and she helps Kristen escape from Freddy.  Kristen tells Nancy that she used to bring her dad into her nightmares but hasn’t been able to do it since she was a child.

We are then treated to a group therapy session where the teens are introduced to Nancy, who immediately recognizes the specter in their shared nightmares.  The teens are clearly frustrated that these doctors that are supposed to help them are telling them that they are neurotic, and their dreams are “By-products of guilt; psychological scars stemming from moral conflicts and overt sexuality.” 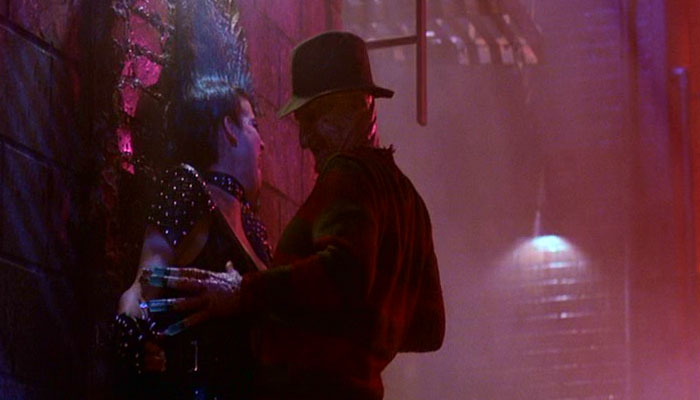 I’m going to stop the scene by scene review here, for several reasons.  The first is that most people reading this blog have seen this movie.  The second is that (in all honesty) my hands hurt.  The third, and most important to me, is that this is where the movie goes off the rails. I know this is a sequel. I know this is the late 80’s. I also know that Craven wanted the first A Nightmare on Elm Street to be a stand-alone and had nothing to do this ANOES2.  That being said, here we are again with teenagers asking their parents or parental figures for help and being either totally ignored or worse yet being called liars and threatened with sedation and/or isolation.  Clearly these are not working, but in the minds of the adults (and I use that word very loosely.) it is because the teens aren’t trying hard enough.

Nancy knows her father knows more than he’s letting on, but he is nothing but a rambling drunk who is using alcohol to flee the past.  Blah blah blah.  I remember really liking this movie when I watched it for the first time.  It is still a fun movie, but the flaws are more evident to me than the fun.  Perhaps it is because I was watching it for critical review and not just for fun. Perhaps it’s just because I’m old nd crusty. “HEY! YOU KIDS GET OFF MY LAWN!” Sorry about that, I’m fine now.

I really hate that none of the teens’ characters were fleshed out.  I wanted to root for them in their fight against the Sleep Demon, but I found myself not caring because a) It’s a sequel, Freddy’s probably going to win; and b) because we never really get to know them.  We never get insight into their personalities, yet we are supposed to believe that they can be superhero types in their dreams?  Nice try.  Freddy does what he does best and separates the group and kills Will, Taryn, Philip, Jennifer.  He makes Philip jump from the hospital’s tower.  He jams Jennifer’s head in a tv. (“Welcome to prime time, bitch!”) But after he kills Taryn and Will, they are simply gone.  Nancy is killed by Freddy pretending to be her dead (yes) dad.  She gets a funeral. Will and Taryn?  Not even mentioned again.  The creepy nun (Nan Martin) who gives Neil clues?  I figured out who she was when she told Neil Freddy’s parentage.  Yep, creepy ghost nun is Freddy’s mom.

This is, despite my ravings, a fun movie.  I was disappointed how I felt after watching it.  I wanted to love it like I did twenty-something years ago.  Alas, despite some great practical effects and a strong writing team, it just doesn’t hold up.  I give it a 2.5 out of five.