EDITOR’S NOTE – Monster was a movie that had a huge impact on me and I think this is one example of, while the story of a film might not be as memorable, the performance elevates it into something extraordinary. I think Charlize Theron is one of the most exciting actors of our time. I’ve been a fan of hers from the day I saw her steal practically every scene she graced in Devil’s Advocate. I think she has a unique ability to completely occupy the space of a character. With many legendary actors, when it comes down to it, you still feel like you are seeing a variation on that person. I watch DeNiro’s films and for the most part, I still feel like I’m seeing Robert DeNiro, or Russell Crowe or whomever. Charlize Theron is a rare example where I feel like she becomes something completely different with each role.

Monster raised a certain amount of attention to an issue at the time, namely that of the practice of actors rapidly gaining or losing large amounts of weight for a film. This wasn’t long after Castaway when Tom Hanks had to lose over fifty pounds in his portrayal of a man who has been stranded on an island. Critics began to speak up, pointing out how unhealthy this is and how much actors were being expected to endure in exchange for a role that may seem more visually legit. The practice

seems to have largely fallen to the wayside as digital technology can now do quite a bit in altering a person’s appearance. At the time Monster came out, Charlize Theron was referred to often as she underwent a radical change in her appearance for this role. What I found striking was how amazing her performance was and that the spirit of that character was in her, not just captured in her physicality. I tend to agree that actors should be able to alter their appearance in ways that are healthier for them and that if the performance is good, that should be good enough for us to maintain believably.

For me, Monster is about a captivating performance of a tragic character.

And with that, I’ll hand things off to Dominic.

Monster (2003) is a crime/drama about the Florida serial killer, Aileen Wuornos. It is a serial killer film in that it is about an actual serial killer, and she kills several people during the movie. But writer/director Patty Jenkins’ angle and execution of the story had me covering my eyes more to hide my tears than to spare myself the shock of the gruesome death scenes one might expect from a typical slasher.

This film takes a very human perspective on our killer. Wuornos (Charlize Theron) narrates, and her earnest—if naïve—voice immediately shows her to be a sympathetic character. She tells us about her childhood dreams, which center on the unfortunate idea that she simply needs to meet the right man to escape poverty and abuse, and ultimately live a happy life. Her pursuit of that man leads her to begin a career in prostitution by the age of thirteen. The film’s diligence in establishing that she

turns to this life because she truly believes it is her only option is particularly disturbing, and it seems that the film has a long way to go to make Wuornos into the monster she is supposed to become.

As Wuornos’ narration brings us to the present arc of the film, she has realized that her childhood dreams were lies, and she intends to kill herself. But the last John she slept with gave her five dollars, and if she dies without spending it then she would have “basically sucked him off for free.” So, she ends up in a gay bar, where she intends to spend the five dollars on cheap beer. While there she meets Selby (Christina Ricci). Selby is lesbian and is constantly having to deal with the animosity of her family, who are deeply religious and disapprove of her lifestyle. After an initially tense exchange, Aileen and Selby close the bar and then end up going home together.

Aileen has never slept with a woman, but Selby is the first person she has established a tight connection with in a long time (possibly in her entire life), and she clings to Selby with everything she has. Selby becomes her reason to live, and she focuses all her energy 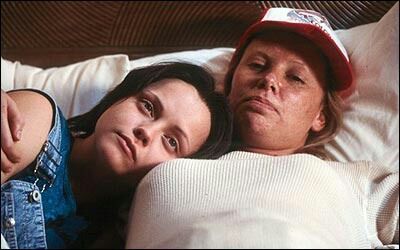 on a new dream, one that involves quitting prostitution to start a happy, normal life with Selby. Aileen and Selby grow closer, and it becomes clear that Selby is the best and worst thing to ever happen to Aileen. She is the promise of the happy life Aileen had all but given up on the day they met, but she also feeds Aileen’s delusions about her place in the world and the opportunities available to her. One product of Aileen’s delusions is her attempt to get a real job. She quickly realizes she has no marketable skills, and her heated reactions to rejection make her disastrous job interviews all the more embarrassing.

Frustrated and backed into a wall, she returns to prostitution. She makes a little money here and there, and then she and Selby repeatedly spend it on hotel rooms and bar tabs. It is only a matter of time until the party comes to a terrible end.

One night, Aileen is kidnapped by a sadist who beats and rapes her. She manages to get free and shoots the man to death. This is a huge turning point for Aileen. If she is to hold onto her dream of living a happy life with Selby, she must rationalize what she has done and work it into the delusional narrative she has spun for herself. This isn’t hard to do with this murder, as the man attacked and raped her. But she doesn’t stop there. She goes on to murder a number of men, including one who picks her up in the hope of helping her, and she finds a unique justification in each case. Using the money she has taken from these men, she attempts to take Selby away by bus only to find they are wanted, and sketches of them have been released to the public. Aileen ultimately takes the fall, confesses to her crimes, and even suffers the heartbreak of having Selby point her out as the killer in court.

This is a great movie. I found it too heartbreaking to call “enjoyable,” but that’s more a matter of taste than a criticism (I mostly traffic in schlock these days). Monster is depressing but honest. We see the world through the eyes of a woman who has become mired in a series of misconceptions about the world; but via her experience, they really aren’t misconceptions. It’s the world as she has always known it, and despite how awful her acts are in the final days leading to her arrest, the way this story is told gives us a clear and organic explanation for how she has arrived at this point in her life. You just cannot help but feel for her and wish someone had gotten to her when she was young enough to save.

Dominic Stabile’s bizarre fiction has appeared in numerous magazines and anthologies, and he is a regular contributor to Manor House Productions’ horror podcast, which produces haunting audio dramas. His bizarro-noir series, The Stone Series, is published through Sinister Grin Press. The first two books in the series, Stone Work and Stone Wall, are currently available. Book three, Stone Dead, is set to be released in late 2018. His Weird Western, “Full Moon in the West,” was released by Grinning Skull Press in 2016, and boasts a healthy serving of “black magic and hot lead.” Dominic runs the MoonLaser Reviews schlock film blog at dominicstabile.com, where they discuss “genre-busting films that are so bad they’re good.” You can head there for more information on Dominic’s books, or simply to say hi. 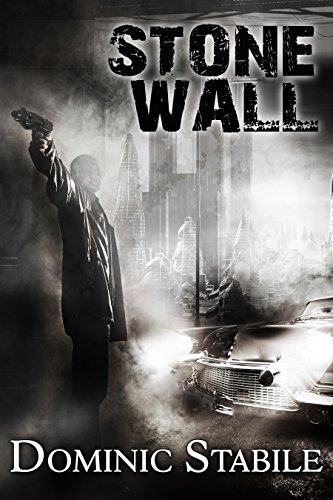 This entry was posted on March 9, 2018 by Chad A. Clark. It was filed under Horror, Movies, Reviews and was tagged with blog, Dominic Stabile, fiction, guest contributor, Horror, horror movies, killers, Movies, Reviews, serial killers, slashers.