Slashers & Serial Killers in Review: ALONE IN THE DARK (1982)

The Eighties are often thought of as the Golden Age of Slasher movies. And why not? We had Jason and Freddy and Michael roaming around movie screens, dispatching hormone-addled teenagers in creative ways. It all became a bit formulaic, but with pretty naked people and bucketfuls of the red, red kroovy, who cared? The horror algorithm was simple back then, and anybody who could get funding from family or a cabal of local medical professionals could follow the formula, shoot a movie in a couple weeks, and potentially get a lucrative distribution deal.

With an audience hankering for knives and nubiles, other horror movies got lost in the shuffle. That’s why most people have probably never heard of Alone in the Dark, a terrific movie from 1982 with no nudity, little bloodshed, and no young’uns traipsing through the forest, tripping over tree roots in the dark.

Most horror movies from that decade feature a cast of unknowns who worked for scale and weren’t afraid to take off their shirts. That’s not the issue here. The main appeal of Alone in the Dark is the brilliant casting of genre stalwarts and a script that plays to their strengths. What horror fan wouldn’t want to see Jack Palance, Martin Landau, and Donald Pleasence share screen time? This is a dream team. Throw Erland van Lidth and Dwight Schultz into the mix, and this becomes one of the greatest horror ensembles of all time. That’s not a hyperbolic statement. That’s science.

Schultz (best known as Howlin’ Mad Murdock from The A-Team television show) plays Dr. Dan Potter, the new shrink on the block at a mental hospital known as The Haven. The inmates seem to run the asylum. They wander the grounds, living in their own realities, loosely overseen by Dr. Leo Bain (Pleasence). Bain likes his weed, and he considers his patients to be “on vacation” rather than mentally ill. When Potter is assigned his first group of patients, including Palance, Landau, and van Lidth, they not only reject him, they believe Potter has murdered their old doctor. That’s a delusion, of course, a highly aggravated case of separation anxiety and abandonment issues. When the power goes out, the electric door locks at The Haven are deactivated, and Potter’s new patients escape with one thing in mind: murdering the man who killed their previous psychiatrist.

This isn’t a basic slash-by-numbers story. The script is deftly written, with some interesting twists and a surprising amount of depth. How do people who believe in non-violence react when death comes walking up to their door, ready to ply its trade? Do you talk it down, or do you fight back with violence and force? It’s a serious issue in this film, treated with respect and reality. 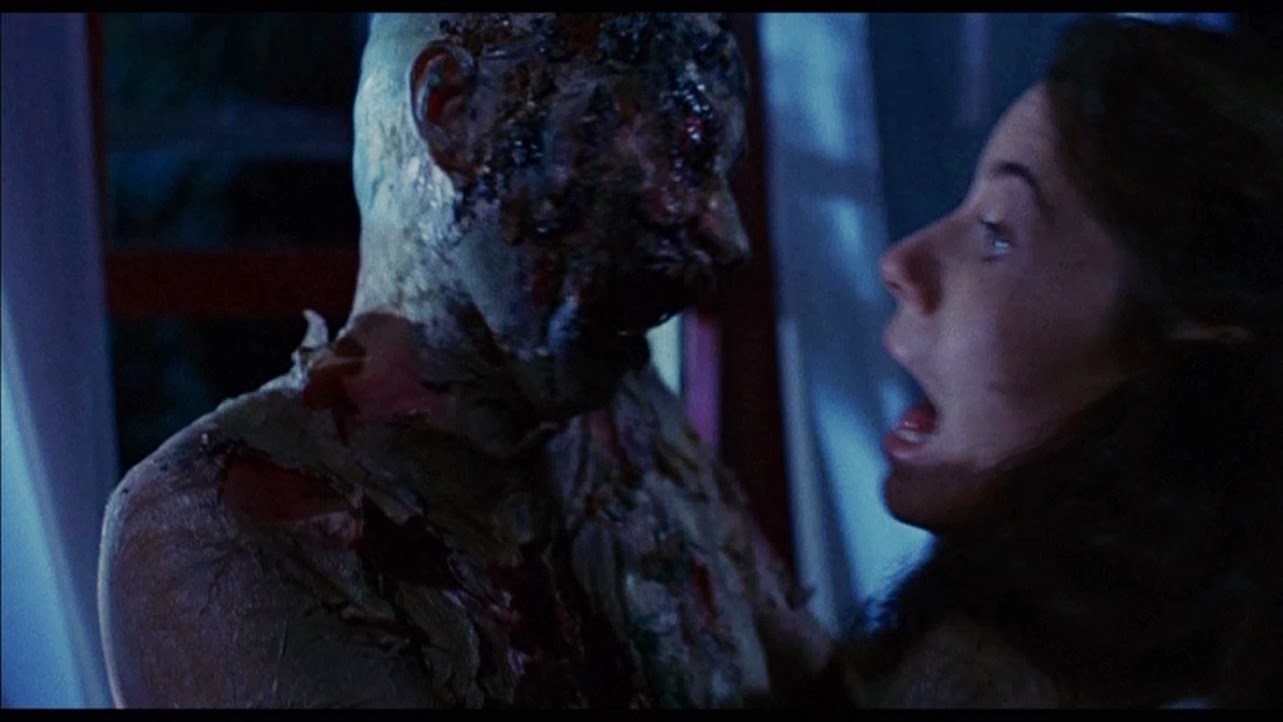 And that’s the real treat here. As contrived as the plot may sound, the screenplay is grounded in the real world. There’s nothing too over the top, no intricately designed set pieces, not even the standard Eighties decapitation. You understand the motivations of the villains; their twisted view of the world makes sense. You also empathize with the good Doctor Potter and his family, who go to anti-nuclear rallies and are actively trying to affect change in the world.

The acting is excellent. Well, Landau’s gonna Landau, and you have to expect that, but he’s ideal for the role of a pyromaniac preacher, spitting scripture and torching whatever he can. Palance is supremely menacing as the ringleader of the escapees. Pleasence plays Dr. Bain as the stoner twin brother of Dr. Sam Loomis from the Halloween movies. He’s the opposite of unhinged, wandering about the movie in a goofy daze, blabbing about peace, love, and innerspace. Even the mandatory precocious ten-year-old child (Elizabeth Ward) has some good lines. This is also director Jack Sholder’s first film; audiences may recognize his name from the sci-fi cult favorite, The Hidden, and the queer cinema classic, A Nightmare on Elm Street 2: Freddy’s Revenge. 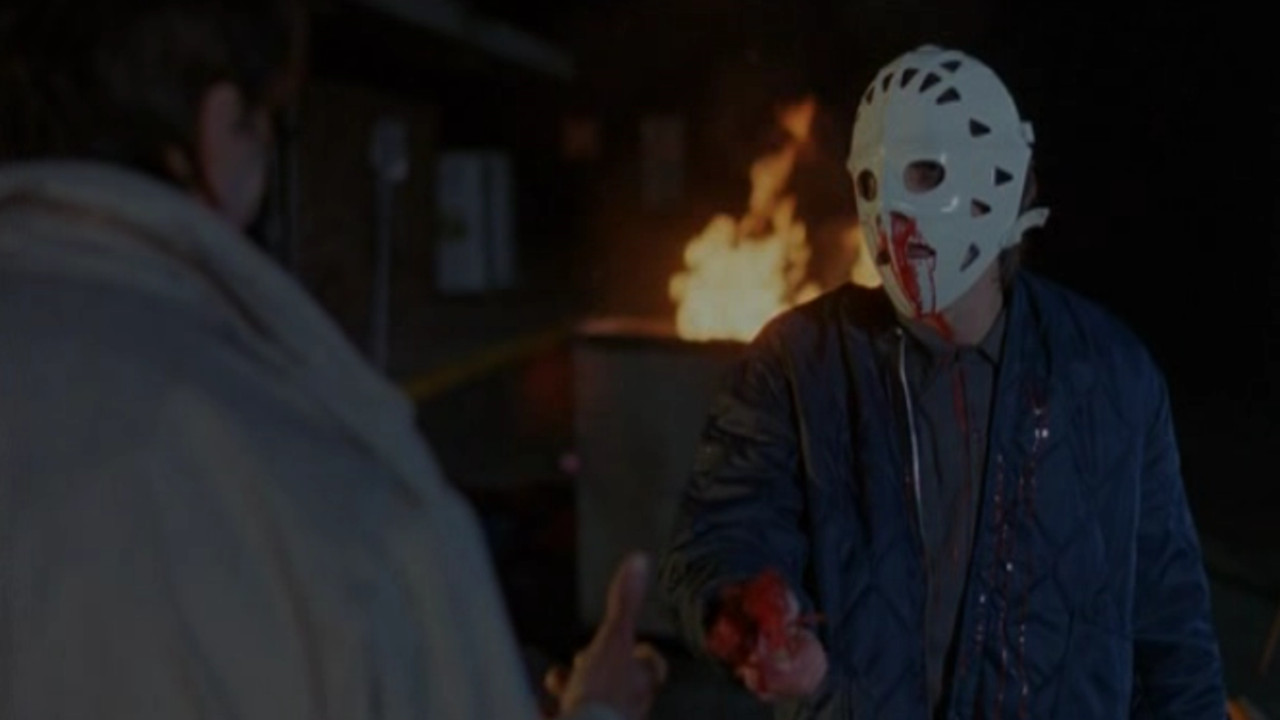 With strong casting and great writing, Alone in the Dark seems like a movie that would be constantly championed on Film Twitter or other movie geek sites. Nope. Wikipedia claims the film has amassed a cult following; if so, they’re awfully quiet about it.

You can blame Jason, Michael, and Freddy for that, attention whores that they are. There wasn’t an audience for a movie like this in a market filled with those unstoppable killing juggernauts. The kids wanted tits and blood, and Alone in the Dark just didn’t deliver in those areas. Much like Max Rockatansky at the end of The Road Warrior, Alone in the Dark lives now largely in our memories. This movie doesn’t even have an official Blu-Ray release. That’s an egregious oversight, because Alone in the Dark seems to fit better in the current age of horror, where smart is scary and blood-covered corpses stuffed in closets are no longer the norm.

Alone in the Dark functions well as an exploration of how mental illness is perceived, which is a heavy underpinning for a slasher film, but it also establishes palpable tension and provides a few jump scares that don’t insult your intelligence. None of that black-cat-jumps-through-a-window shit. A good print is hard to find, but this is a film well worth seeking out.

Jeffery X. Martin is the published author of several stories that are sure to shock, including those in the Elders Keep universe. He also published a fantastic tale in The Black Room Manuscripts Vol 1. You can find his work, including his latest novel, Hunting Witches, on Amazon’s blood-soaked altar. When Mr. X is not writing creepy mind-benders, he’s the host and/or contributor to several podcasts and review sites, including but not limited to, Popshifter, Kiss the Goat, and the Cinema Beef Podcast. He is a frequent contributor to Machine Mean, reviewing for us The Wolf Man(1941), The Invisible Man’s Revenge (1944), Revenge of the Creature (1955), Squirm (1976) Kingdom of the Spiders (1977) and many more.