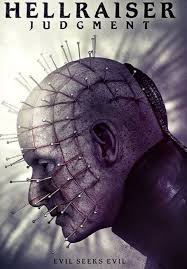 Not very often we review a horror movie that’s been out less than a decade. And for good reason perhaps. Not to say that there are no good modern horror movies. I believe Get Out and Conjuring prove that decent horror is still making its way to theaters and into our living rooms. Yet, as a whole, the horror community clings to the hey-day, so to speak, of better times. Due to this habit, it feels like some movie makers get the notion that all we want to see are rehashed classics. While i have no problem digging deeper into an already established horror universe, but i’d much rather see something new than something old with a new wig, if you catch my meaning. Case in point, last night’s screening of Hellraiser: Judgement (2018).

Detectives Sean and David Carter are on the case to find a gruesome serial killer terrorizing the city. Joining forces with Detective Christine Egerton, they dig deeper into a spiraling maze of horror that may not be of this world.

In a nutshell, that’s a fair synopsis from IMDb. As for the the “maze” of horror, not so much. Here’s what I saw. The movie starts with the new Pinhead, no longer played by veteran actor and supreme Pinhead Doug Bradly, now we get Paul T. Taylor, and truthfully, as far as Pinheads go, he wasn’t that bad. A hell of a lot better than Stephan Smith Collins in Hellraiser: Revelations, talking with an new character we’ve never seen before, The Auditor, played fantastically by Gary J. Tunnicliffe. They are discussing something to do with judgement and collecting the most vile souls or some such. Next we find some dirty looking fella being sent a letter inviting him to some random house. When he gets there he’s tied up and asked a series of questions from The Auditor. What i found interesting here was the device the man was connected to. The Auditor used an old school typewriter to dictate the man’s confession, using the man’s blood as ink. Pretty neat, actually.

From here, the man looks a bit distraught and confused, much like the audience. Standing, the Auditor brings in a creepy as fuck looking weirdo called The Assessor. This guy seasons the typed confession with “children’s tears” and consumes the pages. Shortly thereafter he vomits those pages into a basin which pumps through the wall to a stall where three naked ladies known as The Jury sit waiting to wiggle their fingers into and give a verdict. The verdict, as you may have guessed, is guilty. The man is then cleansed by The Cleaners and then de-skinned by The Butcher and The Surgeon. You can’t make this stuff up, people.

Eventually, one of the brothers detectives stumbles upon said house and goes through the above process. Except in his case, the Assessor vomits black bile and the Jury bleed said black bile from the eyes. The Auditor is quite distressed when suddenly the house is filled with a white light. Hushed whispers are exchanged by the Auditor and an angel called Jophiel. The latter wants the brother detective released back into the wild, which confuses the Auditor due to the fact that hell’s single purpose is to punish the wicked. As the detective makes his escape, Pinhead is brought into the situation as it unfolds. The Auditor wishes to go after the escaped detective, but Pinhead feels confident he will return to them, eventually.

Some of the characters, especially the demon ones, feel about as fleshed out as they can get. The Auditor being my favorite new character from this franchise. I really dug his parts in this movie, and i like the comic book vibe, that there’s more going on in heaven and hell than meets the eye, similar to the feeling in Hellraiser II. Jophiel was decent even to deserve a mention here, again pointing to the comic book styled story arch of competing factions and a hint to a larger Hellraiser universe than we’ve previously seen.  The Assessor was also really weird, which i think is good is that’s what you’re going for.

I’m all about exploring the Hellraiser universe, but does every Hellraiser movie need to have Pinhead? While his character plays an important role in the hierarchy of hell, still…i believe exploring the Auditor could have carried this movie further. As for the human subjects, jeez of pete. Detectives chasing a killer feels like an overcooked trope. At first it felt like there was something interesting going on with one of them being an Iraq War veteran, but even that is starting to feel overdone, especially when it ends up being slapped together, or like adding a pinch of salt to an already salty movie. And as that story plot was revealed for what it was, it really begged some questions that think goes a bit far, reminiscent of calling veterans “baby killers” without really saying the words.

So, yeah. That’s my judgement on Hellraiser: Judgement. You can see the passion there (fantastic practical effects) and the effort (key actors), but if a story doesn’t make sense (kinda like why did the Jury need to be large breasted naked women?) or people are being a tad hammy, the whole movie will fall apart. I’m curious if there will ever be a director brave enough to pursue a “Hellraiser” movie without the usual players? One can hope.

Who doesn’t love a good story? From great works such as, All Quiet on the Western Front and Salem’s Lot, Thomas S. Flowers aspires to create his own fantastic worlds with memorable characters and haunted places. His stories range from Shakespearean gore to classic monsters, historic paranormal thrillers, and haunted soldiers. Residing in the swamps of Houston, Texas, with his wife and daughter, Thomas’s debut novel, Reinheit, was eventually published with Shadow Work Publishing, along with The Incredible Zilch Von Whitstein, Lanmò, The Hobbsburg Horror, and FEAST. His veteran focused paranormal thriller series, The Subdue Series (4 books and counting), filled with werewolves, Frankenstein-inspired monsters, cults, alter-dimensional insects, witches, the undead, and the worst monster of all, PTSD, are published with Limitless Publishing. Visit www.ThomasSFlowers.com and get a free download of FEAST. 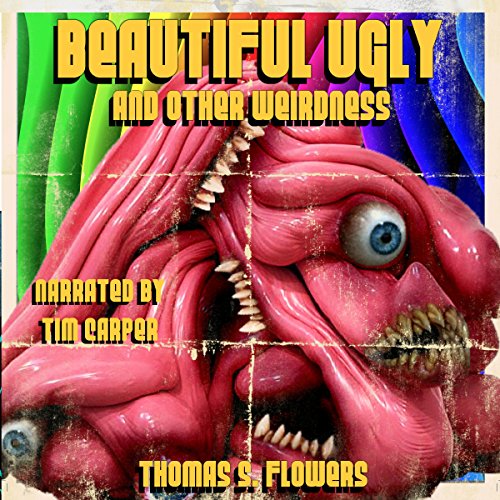