Let’s start with the positive because it’s a new year and I’m trying to focus on such things. The premise for the film is as simple as can be which, as an aside I think is actually essential for great horror. The films and books that perform the best for me are about creating a visceral experience for the reader and the characters. If you need to draw a flow chart in order to find the horror, you might not be doing it right.

The main characters in the movie are a married couple, played by Liv Tyler and Scott Speedman. Kristen and James are spending some time alone in their remote vacation home. During the course of the evening, they are surprised by a visitor at the front door. We never really see who the person is, save for the fact that the voice is female and sounds young. She asks for someone who doesn’t live there and James informs her that she has the wrong house, politely sending her on her way.

The encounter serves as nice foreshadowing for the bulk of the film, in which the couple finds themselves suddenly under siege from multiple masked assailants, intent for reasons they do not know, on doing them harm.

Director Bryan Bertino was inspired by a number of real life incidents for this, including the infamous Manson family murders. And on this point, I will give the filmmakers credit for casting somewhat against type. By putting two young and attractive actors in the lead that weren’t necessarily known for doing horror (Speedman was in the Underworld films but that ain’t horror, son), Bertino seems to be telegraphing a weak right cross in the form of a story where pretty much everything turns out okay for our heroes. There might be some rough bumps along the way but for the most part, things will be fine. I respected the fact that, despite this expectation, the movie does go down a pretty bleak road and doesn’t ever turn back.

I don’t get scared as much by movies anymore but this is a perfect example of a story that has the potential to actually freak me out. For as well as some of these films are made, I’m not really scared that aliens are going to drop down on my house, or that a vengeful ghost is going to pop up out of some alternate dimension or that I’ll become the target of some vengeful demon. But a bunch of psychotics showing up at my house in the middle of the night, looking for someone to kill? That’s something that I could actually see happening. That’s the kind of thing that actually fuels nightmares for me.

This point is highlighted by the fact that in the film, the attackers themselves are almost irrelevant. You know nothing about them because that isn’t the point. Who they are isn’t as important as what they are doing. Throughout the film, you never really get a clear shot of any of their faces. All you get are the rare moments where one of them speaks. To me, this is far more chilling and frightening than a long-winded speech from the villain would be.

Great horror doesn’t give reasons. It doesn’t care. It doesn’t care if you’re a good or a bad person. When horror shows up, it just happens and it runs whatever course it feels like. There is a moment in the film that actually sums up completely my view on horror. While pleading with one of the strangers attacking them, Kristen asks, “Why are you doing this to us?” Now a lot of movies would jump all over this opportunity to monologue and beat the point of the film into the ground. In this case, the response is beautiful in its simplicity and ferocity. Why are they doing this?

“Because you were home.”

That is a mic drop, if I have ever heard one. Nothing can more perfectly capture the feeling of circumstance and irreverent fate that is so essential to horror stories. Horror is about taking someone that is completely innocent and undeserving and plunging them into a situation that is the stuff of nightmares and on this point, The Strangers is incredibly successful.

So what’s my problem? If so much of the movie is so right, then what the hell is going on that bothers me so much? Again, like the premise, the answer is as simple as can be.

Kristen and James are two of THE MOST WORTHLESS characters I have ever seen in a horror film.

And I realize that I’m being unfair to some extent. After all, the point is to torture the characters. A big part of horror is to extend the possibility of hope to the protagonist(s) and give them the idea that they might be able to get out of their situation. And part of the fun is the tragedy in seeing fate laughing in the wings as things just never seem to work out for our characters. This voyeuristic appeal to seeing people fail during some of their darkest points is as old as Shakespeare.

The thing is though, you have to write it effectively and in this case, it just isn’t done. Let me put it this way. If you manage to make it to your car, it’s running and at least somewhat operable, there is no reason why you shouldn’t be able to get the hell out of there. If you find yourself with a shotgun in your hands, facing off against a group of villains armed with knives and baseball bats, you should be coming out on top in that situation.

This is what I like to call the Buttercup Syndrome, at its very worst. Watch Princess Bride and you can get a better idea of what I’m talking about. Essentially, Buttercup Syndrome is where you have a character who has no real value to the story, save for the fact that they always seem to be in peril and need to be saved. This is not ideal for the making of a movie that has any depth to it and it’s even worse here because BOTH of the characters are essentially variations on Buttercup. We like the gut punch of seeing characters screwed with but we don’t necessarily like it when the characters are just bumbling their way through the plot and never really have a chance, no matter how well things are laid out for them.

The writers put Kristen and James into such a strong position to fight off their attackers or at least get away, that the film stops being plausible for me. It really is possible to create a moment of bitter failure for your hero without going so far that it’s like they trip over their shoelaces and impale themselves on a stand full of upside down umbrellas.

And then, to top all of this off, after crafting a brilliant and bleak ending, Bertino can’t resist the urge to go for one last (pointless) jump scare to really get you before you leave the theater. It’s like being served a perfect shot of espresso at the end of your meal, only to have  the server come over and pee in it. 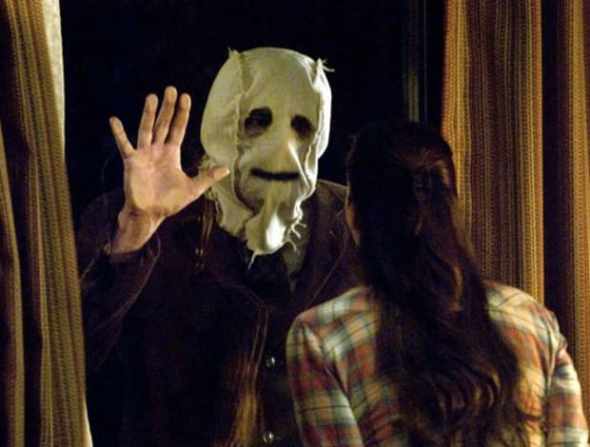 So for me, this movie represents both the best and the worst. There’s a lot of potential here but falling back on and overdoing a lot of stale horror tropes, gives the movie the unpleasant aroma of paint by numbers to me. There’s a brilliant movie in here, I just think a few scenes needed to be left on the cutting room floor. The movie flows well, the tension, foreshadowing and the action is done effectively. The actors do a great job with their performances. I think this movie failed on the drawing board. A few creative decisions and misfires here and there total up to the movie just not working for me as well as I wanted it to. Incredible potential, it just falls short of the mark.

As a final note, I will mention that I literally today saw that a sequel has been slotted for release this year, which I honestly think only serves to further the dilution of the power that was possible in the original film. I don’t have an issue with sequels out of principle. But when a movie seems to have nothing to do with anything that came before it, save for the title, it’s harder to take it seriously. It doesn’t seem like this sequel was made out of a deep love for the first movie as much as it feels like the use of someone else’s work as a wedge to shoehorn your film onto the market. Come on down, pay your ten bucks and watch another story with the same scary people in masks. No thanks.

Watch The Exorcist III. That’s a sequel that continues to work with the narrative of the original film while building a fresh story. The Strangers, part two feels mostly like another example of rinse and repeat to me.

The Strangers could have been an amazing film. Sadly, that’s not how it played out. If you want my opinion, check out Off Season by Jack Ketchum for a far superior treatment of this kind of story.

Chad A. Clark is an author of horror and science fiction. For more information on his literary universe, check out his official website or take a peek at his Amazon author page