Slashers & Serial Killers in Review: A Nightmare on Elm Street (1984)

I wish to start my review by saying that while I was alive in 1984, I led a mostly sheltered life (read: my parents were NOT going to let me as a tender 12-year-old go see a HORROR (gasp!!) movie.)  So, I didn’t see A Nightmare on Elm Street until I was late into my teens. That being said, there are movies that transcend the era in which they first appeared.  Dracula, Frankenstein, Bride of Frankenstein despite being made in the 1930’s still hold sway over generations not even considered then.  Night of The Living Dead, Rosemary’s Baby and dozen’s more still thrill us fifty or more years later.  For every Jigsaw (2017) there must be a Texas Chainsaw Massacre (1974).   My point is that even though it was not a current or hot movie when I saw it, it still held as big a punch for me as if I were a starry-eyed tweenager in 1984.

Let’s take a look at the vision Wes Craven had for a dead serial killer named Fred Krueger.  He’s seeking revenge from beyond the grave, but instead of killing those that killed him (because that would be too -easy,) he’s killing the KIDS of those that killed him.  PLOT POINT: Did I mention Fred was a serial killer?  I did?  Did I mention that his preferred victims were children?  I didn’t?  Well, there you go.  Seems old Fred was not too careful about where he picked his victims, and when he was caught, of course the justice system failed all those grieving parents.  So, they took matters into their own hands and burned Mr. Krueger alive.  Thus began the journey from child killer to…erm…undead child killer? Our story begins with Tina (Amanda Wyss) having a nightmare.  There are all kinds of symbolism and foreshadowing here, and we’re not even five minutes into the film.  There are symbols of purity among the broken down, filthy boiler room.  A lamb; Tina in a white gown.  But the fact that she is barefoot in such a nasty place should clue us in that something is not right in Suburbia. She wakes up and goes to school where we meet the rest of the teen cast. Nancy (Heather Langenkamp), Rod (Nick Corri) and Glen (Introducing Johnny Depp). Tina and Rod are a couple as are Nancy and Glen. That night, Tina begs Nancy and Glen to stay at her house because the nightmare was so disturbing. The girls start describing their dreams to each other, describing their dream stalker, and Glen, who has denied having nightmares, looks up quickly, as if to acknowledge that he has dreamed of this guy. Enter Rod, who does his best to scare the hell out of the girls and Glen. Rod wants what most teenage males want and takes Tina up to the master bedroom.  Glen tries to get Nancy but she refuses saying they are there for Tina.  We are then regaled with the sounds of Rod and Tina having sex and Johnny Depp saying perhaps the best line in the movie: “Morality sucks.” Tina, in post-coital bliss drifts off to sleep and who should be there waiting for her?  Your neighborhood deadly nightmare man.  Her thrashing and screaming wakes Rod and he watches in horror as his girlfriend is murdered literally in front of his eyes by a killer he cannot see.

Enter Nancy’s dad (Played by the incomparable John Saxon), a cop who is clearly overworked and is divorced(?) from Nancy’s mom (Ronee Blakely).  He wants to know why Nancy was at Tina’s house.  Nancy tells him but it falls on deaf ears.   When Nancy has a terrifying dream while at school, her parents both come to the school.  As Nancy describes the man in the dream, mom and dad look at each other, and then we know that they know who she’s talking about, but still refuse to believe their own daughter.

Of course, bad boy Rod is arrested for Tina’s murder; and of course Freddy comes for him, even as Nancy and Glen are in the lobby of the police station begging her dad and other cops to go check on Rod. Too late.  Bye Rod. 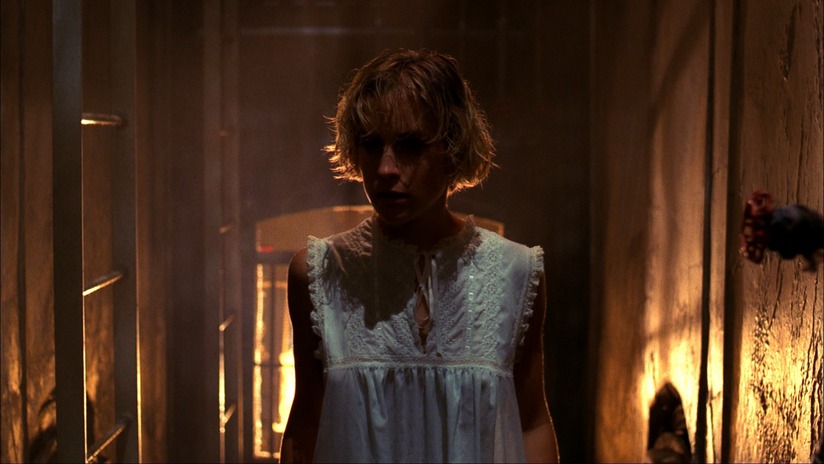 So crazy Nancy is sent to a sleep disorder center and is attacked in a dream we don’t get to see. The aftermath is she has a cut on her arm.  But she also brought back Freddy’s felt fedora. Mom finally breaks down and tells Nancy the story of Fred Krueger. We don’t know for sure if Freddy want to kill the kids because of their parents or because they are Nancy’s friend. Mom even has Freddy’s knife glove.

Nancy realizes that she can bring Freddy back and enlists Glen to help.  But a comedy of errors ensues.  1) Nancy’s mom has installed bars over all windows and extra locks on the door. 2) Glen’s parents don’t want Glen anywhere near Nancy and leave the phone off the hook and go to bed.  Nancy can’t leave and Glen falls asleep.  Uh-oh.  Bye Glen. Does anyone else wonder how Glen had that much blood in him?  Damn, that boy was juicy!

For the finale, Nancy brings Old Fred back to our reality and ultimately sets him on fire (again?!?) But typical final girl, forgets to lock the cellar door.  When daddy and the cops arrive, Freddy is already out of the cellar and is upstairs with (GASP!) mom.  Nancy and her dad get up there in time for Freddy to disappear, and Nancy’s mom, a smoking skeleton in a nightgown, descend into the bed and disappear.  Nancy’s last words to her father are “Now do you believe me?”  Dad leaves and Nancy calls Freddy and tells him that he lost, that he has no power, the he’s “Shit.”  He tries to attack her, but disappears…

…and Nancy walks onto her porch. It is morning and her mom is right next to her.  They talk about the fog, and how mom (a lush) is no longer going to drink.  Glen pulls up in his red convertible with Tina and Rod in the back seat.  Wait, was this all a dream?  Nancy gets in the car…and the convertible top closes.  Red and green stripes like a certain sweater.  The doors lock, the windows go up. Mom smiles and waves and the convertible drives away.  The end.(?)

Some things struck me as I rewatched this movie for this review. First, for a movie released in the midst of the 80’s slasher craze, there is no nudity.  The closest we come is Nancy’s bare back while wearing panties. Now I get that these are high schoolers, but if memory serves, there is some t&a in other “high school” slashers (i.e. Prom Night, Friday the 13th.) That being said, this story doesn’t need it.

Second, Wes Craven created a villain that after this film, became almost a comedian, spouting one liners before, during and after he kills another child.  I read something once that questioned why we loved Old Freddy so much?  Robert Englund played him creepy but funny.  In the reboot, which I will admit that I haven’t seen yet, Freddy is played as a straight-up psycho killer.  Should the fact that we as horror fans became enamored with a predatory child rapist/killer, and in some cases rooted for him to kill certain characters be looked upon poorly?  I’ll leave that up to the individual viewer, but for me, I say hell no. I understand that there are real child rapists/killers in the world and they deserve nothing but the death awaiting them. But a killer who can kill us in our dreams, our most personal, innermost thoughts that most of us don’t even share with our significant others, that is truly terrifying.

This is a masterpiece. Wes Craven was a genius. Sure he had some films that didn’t do as well as others, but when he created Freddy Krueger, he created a villain that scared a generation out of sleeping.  My parents didn’t want to go in the water, I didn’t want to sleep.  An even trade if I do say so.