The eighties were weird time in cinematic history. Teenage werewolves who’ve found the need to fit in and become all-star athletes, a transgender serial killer who has a disdain for camping and boating, lastly, a man wearing a fedora who finds enjoyment by tormenting teens through their dreams, a weird time for films. And if you could take one of those films and use it to describe the cinema from that particular era—The Toxic Avenger, would be your best bet.

A lot of questions can be raised, in regards, to what makes The Toxic Avenger a great movie. Is it the story? No.  Is it the special effects that will make Predator shake in shame? Not necessarily.

What makes the Toxic Avenger a quintessential eighties movie?  For one thing, the entire premise for the movie is every eighties stereotype rolled into one 90 minute experience.  We have an obese mayor, who is constantly eating, and running a crime syndicate to keep the town in check and profiting from the drug trade. We also have teenage punks who go around murdering people in their supped up car. A drug dealer who hangs around a health spa and sells cocaine and steroids.  Everything that makes you think “Hey this is like 1984”!

The Toxic Avenger is a story focusing on a mutant who goes around dispensing justice with a mop, and dispatches criminals in a gory, yet, satisfying way.

It begins at the Tromaville gym, where Melvin (Mark Torgl), a janitor. Who is constantly being bullied by Bozo (Gary Schneider), Slug (Robert Prichard), Wanda (Jennifer Babtist) and Julie (Cindy Manion). The torment gets to be so bad that Melvin is forced to jump out of the window and into a vat of toxic waste—where he turns into the TOXIC AVENGER!  After his transformation, Melvin stops a robbery at a local Taco Shop where he meets his love interest Sarah (Andree Maranda). After Toxie massacres the criminals (in various violent ways that would make any slasher fan jump with glee), they fall in love after getting to know one another. Toxie continues to fight crime, and eventually garners the attention of the Mayor (Pat Ryan Jr), who has been the King Pin the entire time and starts to hunt down Melvin/Toxie.

Meanwhile, Toxie while on the pursuit encounters an old lady at a dry cleaners and dispenses her by throwing her into a dryer and finishes her off on a steam press.  The mayor uses this opportunity to corner Toxie.  In a heroic act the town stands with their Toxic Avenger, supporting him as he removes the inner workings of a corrupt and bloated mayor.

As mentioned earlier, the story is a spoof, a lampoon. What makes the movie a treat is that it shows people that we’re dealing with the same issues thirty-something years later. We have corrupt politicians who benefit from the crime in their cities. Drugs are at the spotlight and in some ways are still a national epidemic. Likewise, bullying is still driving teenagers to either suicide or forcing them to transform into some form of social standard.  The Toxic Avenger is a timeless movie for that fact.

Unfortunately, the same cannot be said about the music. In the decade where synths were hot and thematic music would be hummed for generations to come. Unfortunately, nothing about The Toxic Avengers soundtrack stands out or adds anything to the film, which is a sad truth—the film could have benefited from a memorable soundtrack, especially, when Toxie punishes the criminals with a gory demise. 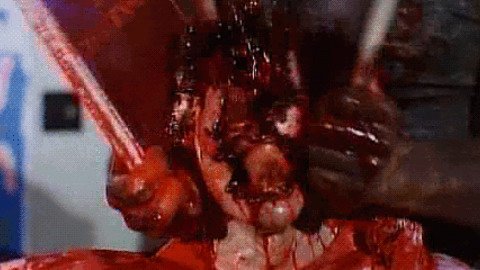 The kills in the film are unlike most creature features—they actually progress the story and meaning.  When Toxie meets his love—she is eating at a restaurant that parodies a taco bell, when a robbery occurs—her dog is shot and this leads Toxie to escort her home and develop feelings; another example, is when an older lady is getting her sons clothes dry cleaned. Toxie appears, and stalks the older lady through the store, throwing her into a dryer and finishing her with the steam press. This death causes the mayor and the police to try and rally the city against Toxie for killing an innocent old lady, which in turn progresses the story instead of it being a kill fest.

Michael Herz and Lloyd Kauffman have contributed something magical to the film historic reels. A movie we can watch and laugh at.  Toxic Avenger is period piece, and a good representation of what the previous generation faced. How they dealt with their internal issues and what we as a generation can learn from.  There is a reason this movie has stood as a classic—it represents a period—it shows us a hero can come from anywhere and all it takes is one to stand up to the corrupt system.

Kurt Thingvold is no stranger to Machine Mean, having reviewed for us on several occasions, including his previous review on Godzilla (1954). Kurt was born and raised in IL. He finds passion in writing, that helps calm his demons. He grew up in a tough household that encouraged reading and studying. He spends his time writing in multiple of genres. His published short story, Roulette, can be found on Amazon. When not writing he can be found playing games, reading, or attempting to slay the beast known as “Customer Service”, which, he fails at almost every day. As mentioned, Kurt is a frequent flyer here on Machine Mean, you can also check out his previous review on Ridley Scott’s legacy movie Alien here.