The Blob, but with clowns. That will get you close to understanding what this film has in store if you haven’t seen it yet, but it doesn’t quite cover it. In fact, despite the Chiodo brothers’ stated intent to pay homage to The Blob, as well as the 50s alien invasion film in general, chalking it up to a simple homage would be a disservice. Killer Klowns from Outer Space is such a great movie in so many ways, but one of its most important features is its originality.

That said, we do get a traditional, alien invasion setup. Our young lovers and leads for the film, Mike and Debbie, are making out on a blow-up raft in the back of Mike’s station wagon when a comet shaped like a circus tent falls from the sky and crashes into a nearby forest. They decide to check it out, and we quickly see where this film takes leave of its predecessors. The comet in fact is a circus tent/space ship, and the inhabitants/space-farers are clowns. Buy why? Why are they clowns? Our characters speculate throughout the movie, but we never get a solid answer—and that is what I love most about this film. It’s a bizarro film. This isn’t to say bizarro fiction has to be consciously opaque. I mean that the characters are presented with an illogical, potentially random evil, and they are left to deal with it by its own rules. A true alien invasion film has implications involving real questions about the universe and our place in it from a scientific standpoint. It’s essentially grounded in reality. Killer Klowns asks, “How would people react if this completely oddball, nonsensical thing happened to them?” 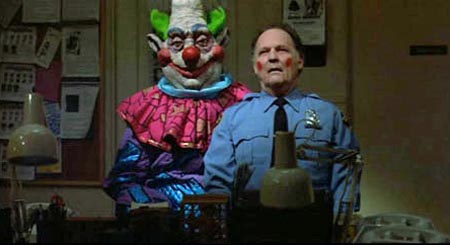 And the filmmakers play off of this incongruity (clowns in place of traditional aliens) throughout the film without it ever becoming tiresome. We get cotton candy cocoons, blasters that shoot popcorn, pies that melt human flesh, implausible, man-eating shadow puppets—this film is fun. Whatever your tastes, you have to give it that much.

If you have a fear of clowns, this movie will likely be straight horror for you. Otherwise, it’s fairly light, more so than I was expecting. There are a number of scenes in which I kept waiting for the gore-fest to begin. One such scene, and possibly the tensest scene of the film, is the one in which the curmudgeon police chief, Moony, is confronted by a killer clown. By this point in the film, Moony has decided that any reports of the killer clowns running rampant through his city are personal attacks, and to accept the truth of what people are saying would be to accept he has grown too old to continue his work as a man of the law. It gets so bad that just before his confrontation with a killer clown, he resolves to stop answering the emergency lines altogether, lighting a cigar and stating, “I made it through a career, I can make it through this bullshit.” His stubborn refusal to accept the insanity of what is going on, and the stakes he has artificially attached to that acceptance, are what make this scene so tense. He tries to deny what he’s seeing, even as it stands right in front of him.

As the scene progresses, and he tries to get the clown to cooperate and go into a cell, he is repeatedly challenged by the obvious fact this is not some kid in a costume, but an intergalactic clown. Yet he can’t accept it, and continuously undermines the creature. You keep waiting for the kill to happen. First, when it pulls a bouquet of flowers and squirts him in the face. Will his face melt away? Nope. Then he puts the cuffs on the clown, and its hands fall off, allowing it to escape. It heads around the corner, antagonizing him as it goes. Mooney shakes it off and goes after it.  Next it grows new hands before his eyes, and he simply laughs, turning his back to it as he unlocks the cell. Now surely it will kill him in some horrible way. Nope, not yet. It’s a gag kill with a party favor that finally ends Moony’s life a moment later, breaking tension in a characteristically humorous way.

All of the death scenes are handled similarly and, ultimately, this film stands as a sort of bizarre comedy that riffs on old horror tropes in a fun way. I waited way too long to watch this one, but I’m glad I finally did. 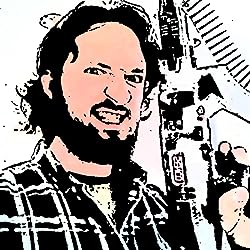 Dominic Stabile’s bizarre fiction has appeared in numerous magazines and anthologies, and he is a regular contributor to Manor House Productions’ horror podcast, which produces haunting audio dramas. His bizarro-noir series, The Stone Series, is published through Sinister Grin Press. The first two books in the series, Stone Work and Stone Wall, are currently available. Book three, Stone Dead, is set to be released in late 2017 or early 2018. His Weird Western, “Full Moon in the West,” was released by Grinning Skull Press in 2016, and boasts a healthy serving of “black magic and hot lead.” Dominic runs the MoonLaser Reviews schlock film blog at www.dominicstabile.com, where they discuss “genre-busting films that are so bad they’re good.” You can head there for more information on Dominic’s books, or simply to say hi. 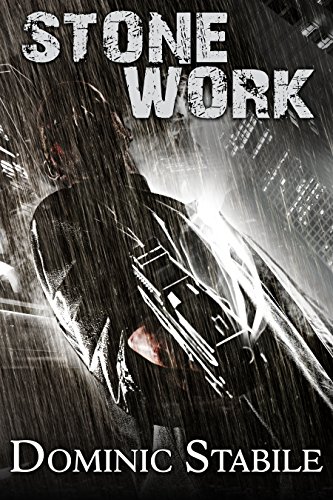