Today’s offering borderlines what we’d define as a “creature feature.” The monster isn’t some radiated beast nor is it (he) cosmic or multidimensional. Castle Freak is without a shadow of a doubt human. Not subhuman nor extraordinary. He’s not unkillable (such as Jason or Freddy) or super strong. But I wouldn’t categorize Castle Freak as a slasher or serial killer or mass murderer either. In fact, when researching some info on Castle Freak I was shocked to find that it was labeled as a mystery slasher film. I think perhaps that’s because the people doing the “labeling” didn’t understand what it was they were looking at. The “monster” in Castle Freak isn’t out for revenge or to score a high kill count, in fact, there’s not a heck of a lot of death in this movie, not if it were indeed a slasher flick. No. Castle Freak isn’t a slasher, its a creature feature, and I’ll tell you why…

Before we wad out into the deep, nibble on this tasty IMDb synopsis:

“A man struggles to save his family from the strange and deadly occurrences in the castle they’ve inherited.”

I have to be honest. This is the best IMDb synopsis I have ever had the pleasure of reading. Seriously. Part of the charm of Castle Freak is the mystery. And giving too much away would ruin it. So, in a round about way let me warn you now, if you’ve never seen Castle Freak and plan to, you might want to turn back now before I spoil this underrated gem. Still here? Good. Then let’s begin. My first screening of Castle Freak was just last month. I remember seeing this one on the shelves when I worked at Blockbuster back in the 90s, but I never bothered to watch it. The title didn’t grab me at the time. The front VHS cover image was kinda meh…and it still is. Little did I know the masterpiece of storytelling I was denying myself…shame. Castle Freak is directed by horror alumni Stuart Gordon and reunites Re-Animator cast (the always lovable) Jeffery Combs, playing the part as husband and father John Reilly. And (the always beautiful) Barbara Crampton playing the part as wife and mother Susan Reilly. Gordon has a knack for directing H.P. Lovecraft inspired movies. Besides Re-Animator, he’s also done From Beyond and Dagon, just to name a few. This of course begs the question, which Lovecraft tale is Castle Freak based upon, if any. And to answer that, according to sources, Castle Freak is a loose interpretation of The Outsider, Lovecraft’s disputed masterpiece (outside of Cthulhu). Keep this information in mind as we continue with out review.

The movie opens with a strange little scene as an elderly woman takes a  cat o’ nine tails and whips some unseen person in a dungeon beneath a castle. The shot is filmed from the perspective of the sufferer. As the audience, we’re being whipped. Following grandma’s bad rendition of BDSM, she strokes out and dies. Next, we find the Reilly family driving through Italy towards a 12th century castle. These Americans are awe struck and after some deliberation and Susan’s awkward request for a separate room for her husband we begin to see there’s some deeper tension going on with this seemingly picture-perfect family unit. Somewhere along the way there’s another cut scene (I can’t exactly remember when it happens) of John driving his kids home drunk. Its shot in black and white or at least in really dull colors. And to our surprise, there’s another kid in the car. Who is this? And also to our surprise the blind daughter (played by Jessica Dollarhide) isn’t blind. What is going on here? Soon drunk driving dad looses control and the family wagon does a flip, leaving broken glass, a blinded daughter, and a dead son in its wake. 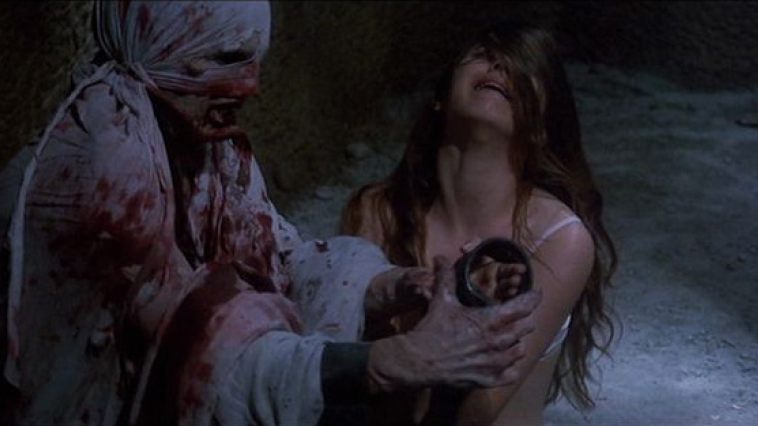 Hence the tension between husband and wife. This irreversible sin that looms over their relationship. Which becomes the focus pretty much throughout the movie. When the Castle Freak escapes his dungeon cell (after eating a cat), and strange noises and the random object breaks, it’s all blamed more or less on John. But as it would seem, some wounds cannot be healed. Not that this stops John from trying. He keeps pushing Susan, wanting her to forgive him. She can’t, of course. Can you really blame her hesitancy? It is after all his fault that their son is dead and their daughter is blind. The daughter is completely dutiful and wants nothing more than mommy and daddy to make up, but in a fit of anger Susan admits to John that she wished he’d died in the wreak and not their son. She hates him not just because of what he did but that he walked away from it all unscathed. This begs a deeper question we may want to keep in mind: Are all wounds visible?

Completely miserable now, John goes off to a local bar and gets totally wasted. There he picked up a prostitute and brings her back to the lower ends of the castle. The Castle Freak is lurking (he’s always lurking) nearby and watches as John and his Italian lover have a quick romp against the wall. John is beside himself with guilt. Remorseful, he pays the woman and passes out on the floor. Lost in the bowels of the estate, the prostitutes is soon captured by the Castle Freak and is locked inside the dungeon in which he was once imprisoned. There he explores the limits of his sexuality. The prostitute seems to be a natural survivor and attempts (though absolutely disgusted) to reciprocate the desires of this monster. But she quickly discovers his…well…equipment either isn’t there or doesn’t function (I couldn’t quite tell). She is freaked out around this point and begins screaming. In a fit, the monster begins consuming her.

Having been seen leaving the bar with the known prostitute, John is quickly blamed for her disappearance. The wife learns of this horrid affair and makes plans of returning to the States. Things progress rapidly from here. The maid follows the strange sounds and discovers the still living prostitute covered in blood and bite marks. But they are not alone, the Castle Freak kills her and runs off. Later, the bodies are discovered and John is taken into custody as the sole suspect for the murders. Mother and daughter are forced to stay so they can give statements to the police. The detective leaves behind two guards to “watch over them.” But these fools are easily dispatched and soon the two women are left alone to deal with the resident monster while John continues to plead his case with the detective at the police station. Not so surprisingly though, no one believes him that there’s someone else living in the castle who’s to blame for the murders.

In a bout of good cop, bad cop, John is able to escape custody and makes his way back to the Castle. Mother and daughter are trapped on one of the castle towers. And John arrives to battle the monster. During the course of this struggle, it made me wonder, was John battling the monster or was he really just battling himself? There is an air of mystery to the film regarding exactly who this Castle Freak literally is. Sure, the long lost brother of John whose mother tortured and beat with that whip for over forty years. But honestly, this wasn’t the lure of the story. If not that horrifying revelation, then what? Thinking back to the inspiration of the movie, The Outsider is arguably one of Lovecraft’s best short stories. Why? Well, like most of his work it’s dark and foreboding, but it also packs a punch in terms of metaphor and allegory. Not to spoil the story for you, but The Outsider turns out to be this freakish looking man who everyone misunderstands and runs away from. Supposedly this was Lovecraft’s “self portrait.” Charming, no? And with that in mind, we have to wonder who or what Castle Freak is really about. Did John crawl away from that wreak truly unscathed as his wife claimed? In a way, the Castle Freak was simply a personification of John’s inner turmoil, his “self portrait.” And as with all monster movies, including our beloved creature features, the most frightening monster of all is always ourselves.

Who doesn’t love a good story? From great works such as, All Quiet on the Western Front and Salem’s Lot, Thomas S. Flowers aspires to create his own fantastic worlds with memorable characters and haunted places. His stories range from Shakespearean gore to classic monsters, historic paranormal thrillers, and haunted soldiers. Residing in the swamps of Houston, Texas, with his wife and daughter, Thomas’s debut novel, Reinheit, was eventually published with Shadow Work Publishing, along with The Incredible Zilch Von Whitstein, Lanmò, The Hobbsburg Horror, and FEAST. His veteran focused paranormal thriller series, The Subdue Series (4 books and counting), filled with werewolves, Frankenstein-inspired monsters, cults, alter-dimensional insects, witches, the undead, and the worst monster of all, PTSD, are published with Limitless Publishing. For more on Thomas be sure to visit his website at www.ThomasSFlowers.com.

“A great read with many multiple stories set within the main book” -Amazon Reviewer.