Be that as it may, even folks who consider themselves “fans” of flesh eating walking corpses are not necessarily all that well versed when it comes to the cabinet of zombie movies. Nowadays I’d say that’s a fair statement given the popularity of The Walking Dead and Z-Nation (not sure if that’s still popular, but I tossed it up anyway). There are some zombie fans who watch TWD and that’s about all she wrote. And there are others who delve into the Romero films, such as Dawn of the Dead, Night of the Living Dead, Day of the Dead, Land of the Dead, Diary of the Dead, and I shall’t not name that dreadfully last one made. And some Romero fans haven’t even seen all the named and unnamed movies. And then there are the truly indoctrinated flesh eating fan, those who’ve peered into the depths of foreign film and came back to tell the tale. You think only the Americans have zombies in the bag, well…you are sadly mistaken. As Winston Zeddmore so aptly put it, “I have seen shit that’ll turn you white!”

This all brings me of course to our movie under review, one I doubt many have seen. And that’s okay. This one is pretty obscure, though not as obscure as Invisible Invaders, but hey, we gotta start somewhere, right? On this installment of Fright Fest, we will be discussing Burial Ground, aka The Nights of Terror!

Need your IMDb fix? We’ve got you covered:

“A professor opens a crypt and reanimates rotten zombies. The zombies attack a jet-set-group which is celebrating a party in a villa nearby…”

This is a very rare occurrence for IMDb to write a synopsis that covers the entire gist of the movie…because this is really the entirety of Burial Ground. Honest. There is no plot, none that I could derive. No explanation for why that bearded insane looking professor was messing around in the ancient “burial grounds” or how or why he unleashed those flesh eating ghouls or why he shouted, “I’m your friend,” as they devoured him alive. I’m not sure what “jet-set-group” means, but in terms of the movie, the professor had apparently invited a group of friends or students or colleagues, whatever, out to this manor (his or not, I have no idea) to celebrate his discovery, what said discovery is is anyone’s guess. There’s a few scenes of wholesome debauchery, some drinking, eating, merry nudity, and one very special scene that we’ll get to here very soon.

“Mother, this cloth smells of death!”

Most stories require some sort of plot to carry the audience from start to finish…and I say “most” because somehow, someway, the lack of plot really works for Burial Ground. Instead of worrying about human drama, people behaving badly, we get to be witnesses to the last days of this group of unwitting passengers. They have no idea what’s coming, but we do, and its wonderful. The pace was simply fantastic. A slow methodical buildup and then when the flesh eaters make an appearance, its an all holds bar. And I especially love how the zombie were slow and still terrifying. They were terrifying because they were relentless and they were everywhere. This was one aspect I’m glad they carried over from Romeroism, the rest of course is all their own. And that’s also great, because not every zombie movie needs to be a Romero movie. Sometimes we just want to sit back with a bucket of popcorn and watch people get eaten alive. Sometimes we don’t want some complicated human drama, we know people behave badly, we don’t need to see it on every zombie movie that comes out.

In Burial Ground, we get to see a story unfold naturally because its all reactionary. The plot is as simple as the IMDb synopsis, nothing more. A group of people came out to celebrate only to face a serge of living dead. And now they must survive, somehow, escape, if the can. And behind every corner or monastery or whatever, there are the walking dead, waiting for them. The tension is super high and the practical effects are actually pretty good. And it comes when one of the most nihilistic endings i’ve ever seen in a zombie movie…wonderful stuff. Not to mention that “special” scene between Michael (played by Peter Bark) and his mommy…oh my. If we weren’t already having fun already, director Andrea Bianchi then tosses in a dash of incest for flavor. Its nothing overly grotesque, but still…its very odd…and (call me deranged but) funny. 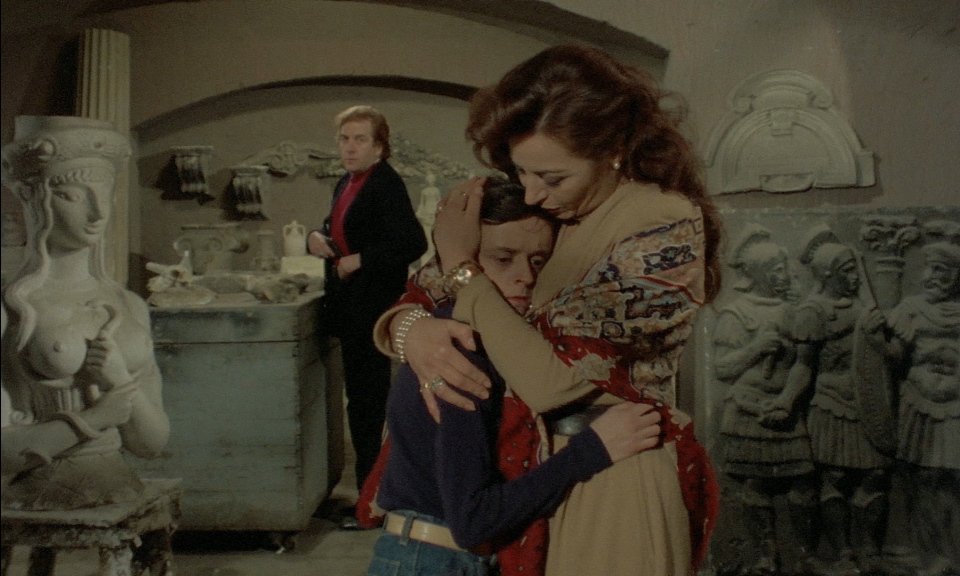 Burial Ground is definitely a movie you need to experience for yourself. Its campy, gory, and wonderfully simplistic. Just a movie you can unplug, sit back, and enjoy, that this if flesh eating ghouls are your thing. This movie especially works if you have not explored much in foreign horror, or foreign zombie movies specifically. There’s nothing complicated to try to keep up with that you’ll find in The Beyond or Nightmare City, here you can ingest as the witting participates are “done-in” one by one. And you get to enjoy one of the greatest movements between a “boy” and his mother, yuck!

Who doesn’t love a good story? From great works such as, All Quiet on the Western Front and Salem’s Lot, Thomas S. Flowers aspires to create his own fantastic worlds with memorable characters and haunted places. His stories range from Shakespearean gore, feuding families, classic monsters, historic paranormal thrillers, and haunted soldiers. Residing in the swamps of Houston, Texas, with his wife and daughter, Thomas’s debut novel, Reinheit, was eventually published with Shadow Work Publishing, along with The Incredible Zilch Von Whitstein, Lanmò, The Hobbsburg Horror, and FEAST. His veteran focused paranormal thriller series, The Subdue Series, filled with werewolves, Frankenstein-inspired monsters, cults, alter-dimensional insects, witches, and the undead are published with Limitless Publishing. Want free fiction? Be sure to visit his website, www.ThomasSFlowers.com for details.

PLANET OF THE DEAD