The film is basically a 50s/60s B-Movie, made in the eighties. It has a cheesy voice-over at the beginning which would not be out of place in Invasion of the Bodysnatchers or War of the Worlds. The setup is remarkably similar to Day of the Triffids. A once in a lifetime meteor shower promises an amazing light display, so the entire world and their dog hold street parties to have a few beers and take in the sights. Unfortunately, thanks to the heavy handed introduction, we learn that this very comet also made an appearance just as the dinosaurs disappeared.

We’ll get to the story, or what there is of it shortly enough, there are a couple of notable things about the film. First off, and the thing which was subliminally planted in my mind, is the colour palette. Whilst the meteor shower lighting effects are a little basic, it’s the reddish hue that is left the next day that stuck in my mind. So much so, that I used it in my first ever book. At the end of the film, when all is good in the world again, there’s a big rain storm, which clears the sky and streets, and turns it back to the atypical blue Californian sky. It’s a simple touch, but effective.

The second, and probably main thing, is that this is a push at being called a zombie film. The few that we encounter – and seriously, it is single digits, even counting the ones from Sam’s dream – can talk, use tools and shoot guns. The hobo fellow we meet first off, that eats Larry, the boyfriend of main character, Regina, looks a little like Big Daddy from Land of the Dead. He bludgeons Larry unconscious with a wrench, before carting him off to eat behind some conveniently placed boxes. When Regina encounters him, he’s happy chatting away to her. I think it only gets classified as a zombie film, as Regina refers to one with the dreaded Z word.

The story is pretty standard fare, but with some cool little bits to it. The comet vapourises everyone who is out in the open, turning them into dust and clothes. The only true survivors are those who slept somewhere that was encased in steel. It’s a different way of enabling people to survive, even if it’s fortuitous that both sisters manage it on the same night. Regardless, after the two sisters realise what’s going on, and that Christmas is going to be awfully quiet this year, they hear that the radio DJ is still talking. Eager to find someone else to talk to, they head off to try and find them. They get to the radio station only to discover that it’s abandoned, and the voice and music are just recordings. Here, they meet up with Commander Chakotay, sorry, Hector, a trucker who spent the night in his cab, and therefore qualifies as a survivor under the steel wall rule.

With this going on, we see a mysterious underground lab, the scientists there listen in to the radio transmission, and decide that they should go and help. What bloody nice chaps, huh? When Hector goes off to try and see if his mother has survived, the two sisters do what any teenage girl in the eighties, who discover that the world has ended would do, they go shopping. It’s during this shopping spree, that they bump into some stock boys who worked in the shop.

In what is probably the coolest bit of the film, if not cheesy as hell, the sisters fight back against the gang, who are a bit pissed that someone is trying to steal from them. It’s only when the pair are captured, that we realise that the blokes aren’t just a bit deranged, they’ve also been exposed to the comet’s effects. Just as the leader is about to off the sisters, the scientist’s rescue team rocks up and guns the gang down.

Turns out that the scientists aren’t quite the altruistic types we’ve been led to believe. Despite their eggheadness, and anticipating the effects of the comet, some Grade A dolt left the ventilation shaft open at their super-secret base, and they are all slowly succumbing to the same thing which turned the stock boys into sunken eyed, bad skinned mofos. To try and get better, they’ve decided that snagging survivors, rendering them unconscious, and then draining them of their untainted blood, is the best thing to do.

Regina realises this whilst being questioned, and manages to escape within the base. After Sam and Hector rock up, the former you think had been euthanised by one of the rescue team, they kick butt, and make sure that the only thing the scientists will be syphoning, is their last breath. It ends, with Hector and Regina adopting some weird parent role, looking after the two kids they saved from the lab. Sam manages to get a little action of her own, when a guy rocks up in his Benz, and the pair go off together, promising to be back by midnight.

The effects, when they appear, are pretty cool. It’s weird that the goriest part of the entire film, is a dream sequence, when Sam gets pulled over by two motorcycle cops who are also zombies. They try to eat her, and as she’s pulling on one of their hands, which is clamped over her mouth, the skin is coming apart. The budget was definitely small, hence why they hide the zombies eyes behind big sunglasses. Thing is, yes, it’s a bit shit, I’m not going to lie about that, but it does have that ‘so bad it’s good’ quality about it.

I first watched it when I was nine or ten, and even after all those years, I could still recall certain details about it, right up until when I watched it again a few years back. It’s not going to set the world on fire, but it does what any film should aspire to. It entertains. That’s what I want from this type of film, not a ninety minute allegory, I want to be entertained. And Night of the Comet, though it doesn’t bring a whole lot of new things to the party, and barely qualifies as a zombie film, does that in spades. If you’ve got a lazy Sunday afternoon, you could do a lot worse than watching this film. 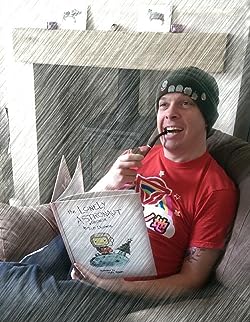 You know when your eye twitches? Or your fingers flick out on their own accord? That’s not your skellington trying to escape, that’s the invisible tendrils of Duncan P. Bradshaw searching your nervous system for symptoms of HORROR. He uses his powers, not for good, but for evil, leeching the terror and panic from everyday people like you and me. What does he do with this viscous goo of terror? Why, he loads it into a special fountain pen, opens up a thrift shop pad, and writes down the weird and wonderful things that have coalesced in his brain. Check out his website for information on his books, http://duncanpbradshaw.co.uk/ or, better yet, go Like him on Facebook, where he’ll entertain you in other ways https://www.facebook.com/duncanpbradshaw/ 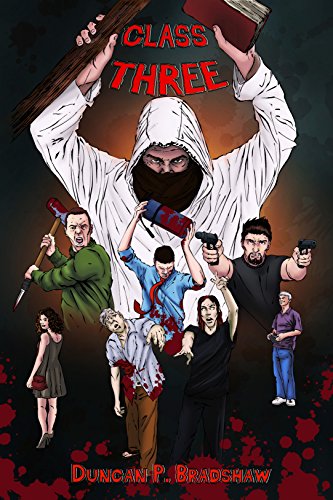