Return of the Living Dead

There’s a moment about midway through Return of the Living Dead wherein several humans (who are  trapped inside of a funeral parlor as waves of zombies run rampant outside)  tie the writhing half-corpse of a long dead woman to an embalming table.

As the foul apparition howls and groans in that eerie, haunted manner ghouls seem to have perfected since George Romero reinvented them as flesh eaters back in 1968, it dawns on them to ask her why she and her recently risen compatriots are set on eating human beings. She corrects them;  They eat brains, not people. When further pressed as to why they eat brains, the creature informs her captors it’s to ease the pain of being dead, as she can feel herself rotting.  This scene reveals a profound truth about the living dead: No one wants to be a zombie, least of all the zombies themselves.

Unfolding against an energized Punk soundtrack  (including the iconic “Partytime”, courtesy of 45 Grave), Return of the Living Dead tells the story of a young man named Freddy (Thom Matthews, who would appear as an adult Tommy Jarvis in Friday the 13th Part VI: Jason Lives the following year), new on the job at the Uneeda Medical Supply warehouse in Louisville, Kentucky.  While Freddy is being shown the ropes by his supervisor Frank (the ever reliable James Karen), the two men manage to release a dangerous gas known as Trioxin from one of a trio of Army canisters being stored in the basement, each of which contains a corpse that had once been resurrected by the chemical years earlier (In a fun meta nod to horror fans, the reanimation incident in question is purported to have later been fictionalized as the film Night of the Living Dead).

While this is happening, Freddy’s girlfriend Tina (Beverly Randolph) and the rest of his friends are cruising around, looking for something to occupy their time until he finishes his shift. Being a group of literal punks ( some of whom even boast the requisite period Mohawk and leather), they decide to party in a cemetery located across the street from the medical warehouse. As Tina goes to pay a visit to her boyfriend, the rest of the group breaks out the beer, dances naked on graves and otherwise entertains themselves. 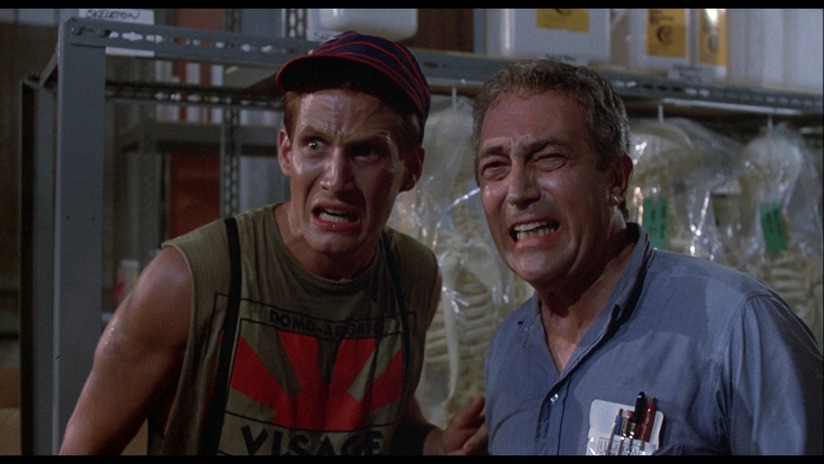 Before long, the situation inside the warehouse escalates, until the two men responsible for releasing the gas are forced to call the owner, Burt Wilson ( a marvelous Clu Gulager).  Wilson shows up and is less than pleased, as it turns out the canisters were never supposed to be delivered to the warehouse in the first place and are considered something of a dirty little secret.

In a fit of panic, Wilson decides to ask neighboring mortician  Ernie Kaltenbrunner ( a disarmingly dry Don Calfa, portraying the operator of  the funeral parlor associated with the aforementioned cemetery) for help in disposing of items in his stock effected by the Trioxin (including some half dogs used for teaching and a medical cadaver). From there the Trioxin is inadvertently released into the night sky, where it seeds the clouds and provokes a rainstorm, showering the graveyard with the chemical. Soon after, the dead begin to rise and the fun begins in earnest.

Return of the Living Dead began life as a novel written by John Russo, who helped bring Night of the Living Dead  to fruition alongside George A. Romero. The two agreed Romero could continue in his own vein, using the term “Dead” in his titles, while Russo had the right to pursue other directions using the phrase “Living Dead.”

Attempts to film the novel date back to at least the 1970’s , with the late Tobe Hooper being attached at one point. Dan O’ Bannon came on board and, after Hooper left the project, was offered the opportunity to direct the picture. O’ Bannon (whose extensive writing credits included  Alien and the grotesquely underrated Lifeforce, which Hooper did direct) agreed on the condition he could revise Russo’s initial story concept to distinguish it as much as possible from Romero’s zombies.

The rest is history.

Return of the Living Dead  is not only an insanely entertaining horror film, it manages to be an important one in regards to zombie cinema.  Today’s younger  horror fans who have yet to experience the film’s bizarre and ghastly delights may not be aware this was where the concept of zombies specifically hunting for human brains originated.  This was also one of the earliest films to posit the only way to stop a zombie is to entirely incinerate the body. A shot to the head won’t do it.

The picture is also groundbreaking in that it’s one of the first mainstream efforts to feature zombies who are fast and strong rather than shamblers. Released almost twenty years before Zach Snyder fully mobilized the Undead in his excellent remake of Dawn of the Dead, ROTLD presents creatures who are able to race after their victims, even if it means hobbling after them on bloodied stumps instead of legs. In an even stranger twist, these walking corpses can speak. This provides some brilliant moments of dark comedy when a few clever zombies, having figured out how to use a CB radio,  summon  unsuspecting victims to their location by calling for paramedics and police officers.

The screenplay is well written. There’s a lot more going on in this movie than the basic ‘band of survivors board up a house and give way to infighting as they try to survive the zombie apocalypse’ trope we’ve seen ad nauseam over the years.  Aside from the base narrative about the chemical resurrecting the dead, there are two other ongoing subplots. One concerns the Army and their response to finally locating the canisters (which, we discover, they’ve been seeking for a number of years).  The other follows the misfortunes of Freddy and Frank as their exposure to the Trioxin painfully transforms them into zombies. O’Bannon weaves these multiple threads together deftly, culminating in a resolution both bleak and mordantly funny in its practicality.

The cast is excellent, with Gulager, Karen and Matthews all delivering centered, entertaining performances. My personal favorite, though, is Don Calfa as the likable, sensible mortician. He has a direct, honest and well meaning way about him that I found to be a refreshing change of pace.  In many of these films the human characters eventually devolve into base, primitive behavior under increasing pressure. This character evolves in the opposite direction, making intelligent decisions in concert with a rapidly deteriorating set of circumstances. Genre fans also have much to celebrate with solid appearances by horror regulars Linnea Quigley as the nymphomaniac-turned-femme fatale zombie Trash and Miguel Nunez (Friday the 13th Part V: A New Beginning) as Spider, who attempts to keep it together despite his bewilderment and apprehension. More than any of the other supporting characters, Nunez serves as a relate-able surrogate for the audience, so frightened at one point he’s reduced to choking his words out in angry sobs. 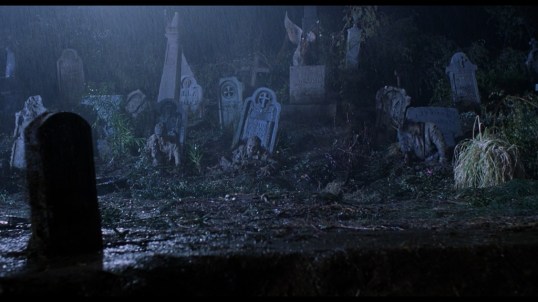 Then there are the visual effects. The special effects work in ROTLD is some of the finest in the history of the sub genre. From rotted ghouls clawing their way out of their graves in the midst of a torrential downpour to the terrifically hideous “Tarman” melting with decay (this gruesome fellow is given the signature line of the film upon confronting an intended victim,  excitedly calling out “More brains!”), the ghouls seen in this film appear to have walked off the cover of one of the classic E.C.  titles. Brought to life through a masterful combination of puppeteering and makeup  (this film is a bonanza of top-of-the-line practical work), these monsters are absolutely beautiful in all of their twisted glory.

By the time this movie was released, the silver screen heyday of the zombie was winding down. The era of classics such as Lucio Fulci’s Zombi or even cheap, blatant Romero knock offs such as Bruno Mattei ‘s Hell of the Living Dead had passed, with slasher films dominating the box office. Aside from Romero’s own Day of the Dead (which took a critical beating upon its initial release, only earning much deserved praise in later years), Undead cinema had largely been relegated to low budget, b-movie junk, most of which disappeared into an early grave as quickly as it climbed out of it.

Return of the Living Dead gleefully bucked that trend, offering up a welcome blast of originality for a type of horror which seemed in danger of growing as soulless as the very monsters it was depicting. It’s the zombie apocalypse as filtered through a Punk Rock sensibility, a surprisingly funny (and deeply nihilistic) film serving up equal parts horror and humor in good, gory measure.

If George A. Romero was the genius who made zombies hungry, John Russo and Dan O’Bannon were the guys who gave them something to say. With an attitude. Every horror fan should see this at least once in their lifetime. It’s essential zombie cinema.

D.S.Ullery has published in various ezines and magazines, as well as the anthologies When Red Snow Melts; Creature Stew; Journals of Horror:Found Fiction; Wild Things:Thirteen tales of Therianthropy ; Paying the Ferryman and The Final Masquerade. Beyond Where the Sky Ends – the first collection of his horror fiction- was published in early 2016. A born and raised Floridian,  he lives with a black cat named Jason, who was born on Friday the 13th.

Be sure to pickup his book The Blood You Owe on Amazon! 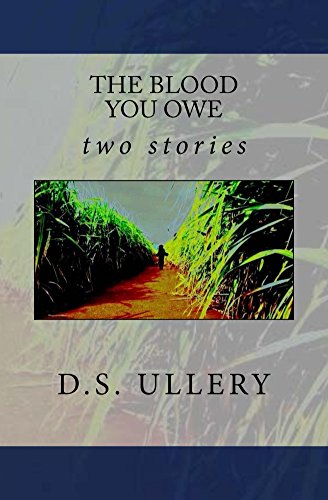