Though zombie is never said in Night of the Living Dead, this 1968 horror film set the standard for all following zombie films: radiation raises the ghouls (as they’re called in the film) to life (though, as of this film, radiation as a cause is only speculation), they move in a slow, plodding manner, they eat the flesh of the living, and the people they kill turn into zombies.

What makes George A. Romero’s Dead films so important, though, isn’t the thrills and chills they provide, as generous as that providing assuredly is. It’s the social and political commentary, hidden beneath the piles of corpses, that distinguishes him from his imitators. The following is my interpretation of that commentary, a theme of mindless, pitiless killing, and a killing not limited to what the zombies commit, by the way.

Here are some famous quotes:

“They’re coming to get you, Barbara.” –Johnny

“Now get the hell down in the cellar. You can be the boss down there, I’m boss up here!” –Ben

“We may not enjoy living together, but dying together isn’t going to solve anything.” –Helen Cooper

Harry Cooper: We lock into a safe place, and you’re telling us we gotta risk our lives just because somebody might need help, huh?

Newscaster: Reports, incredible as they may seem, are not the results of mass hysteria.

Harry: “Mass hysteria?” What do they think, we’re imagining all this?

Field reporter: Are they slow-moving, chief?

Sheriff McClelland: Aim between the eyes.

Appropriately, the film begins with a visit to a graveyard as evening is approaching. An overarching theme in this movie is human conflicts, of any kind; the zombie killings may be the focus, but when one really thinks about it, the zombies’ human-killing is only the tip of the iceberg. Before even one zombie has appeared, Barbara (Barbra? Whichever.) is arguing with her brother, Johnny, who taunts her about a time he scared her in this graveyard (see Quote #1). 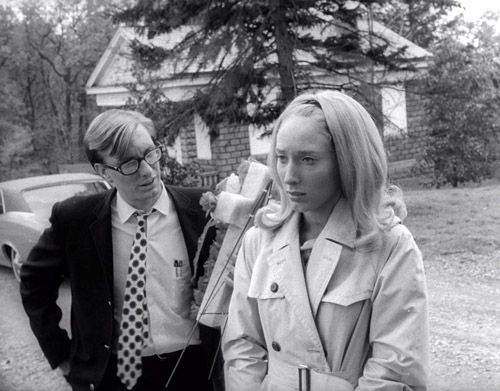 Along with this conflict, aggression, and violence between people is the sheer mindlessness of it all. Johnny gestures to the first zombie as he’s taunting his sister, unaware that it really is coming to get her.

The ghouls move and look as if they’re “in a kind of trance” (to quote the radio newscaster), killing people without seeming to have any individual will. This is similar to how all the armies in history, fighting imperialist wars, have gone around murdering the civilian populations of the ‘enemy,’ mindlessly ‘just obeying orders.’

The zombie kills Johnny, and Barbara flees from it in terror, finding a house to hide in and lock the ghoul out. But this house is hardly a sanctuary from zombies, for she sees, at the top of the stairs to the second floor, a mangled corpse.

Soon after, a man arrives in a truck, and fights off the approaching zombies so he can get in the house. His name is Ben. He starts nailing wooden boards on all the doors and windows so the zombies can’t get in.

The choice for an actor to play Ben, the male lead, was a black man (Duane Jones), which was unusual for 1968, but an excellent choice. The script wasn’t particular about whether Ben should have been black or white, though the biases of the time would have presumed a white actor. On the other hand, Romero said that Jones gave the best audition for the role, so why not?

And indeed, Jones gave an excellent performance. He was, in real life, an articulate, well-educated man, and a drama teacher. Given the anti-establishment feelings growing in the U.S. at the time, it was refreshing to see a black man on the screen taking charge, being resourceful, and not taking any shit from a grumpy older white man like Mr. Harry Cooper.

Now, as good a man as Ben is, his goodness is limited. Traumatized Barbara is silent for most of the film, frozen in fear; but at one point, after Ben has told her of his own harrowing experiences fighting off the zombies, she tries to tell him of hers with the first one. The only way she can get the terror out of her system is by screaming it out, but Ben, preoccupied with securing the house and trying to keep his own head together, can only tell her to calm down instead of giving her the empathetic ear she needs.

This problem ties in with a theme connected with the mindlessness of the killing in this film: lack of empathy, or at least a scarcity of it. It’s one thing for the zombies to be going around killing people; it’s another when the survivors do far less to help each other than they should–and this leads us to those people hiding out in the cellar.

Why did they take so long to come up and find out what was going on with Barbara and Ben? Their excuse was that the screaming and banging around on the ground floor was too confused to get a sense of what was really happening; but surely, when you hear screaming–as opposed to zombie moaning–you know that someone’s in danger, and that you should help. But Mr. Cooper doesn’t want to.

So instead of working together to the maximum possible, they find themselves bickering with each other, Ben and Cooper in particular. Ben isn’t the only one frustrated with Cooper, though: his own wife, Helen, has little patience with his wish to be seen as justified in staying locked up in the cellar, “the safest place” to him, but “a death trap” to Ben. 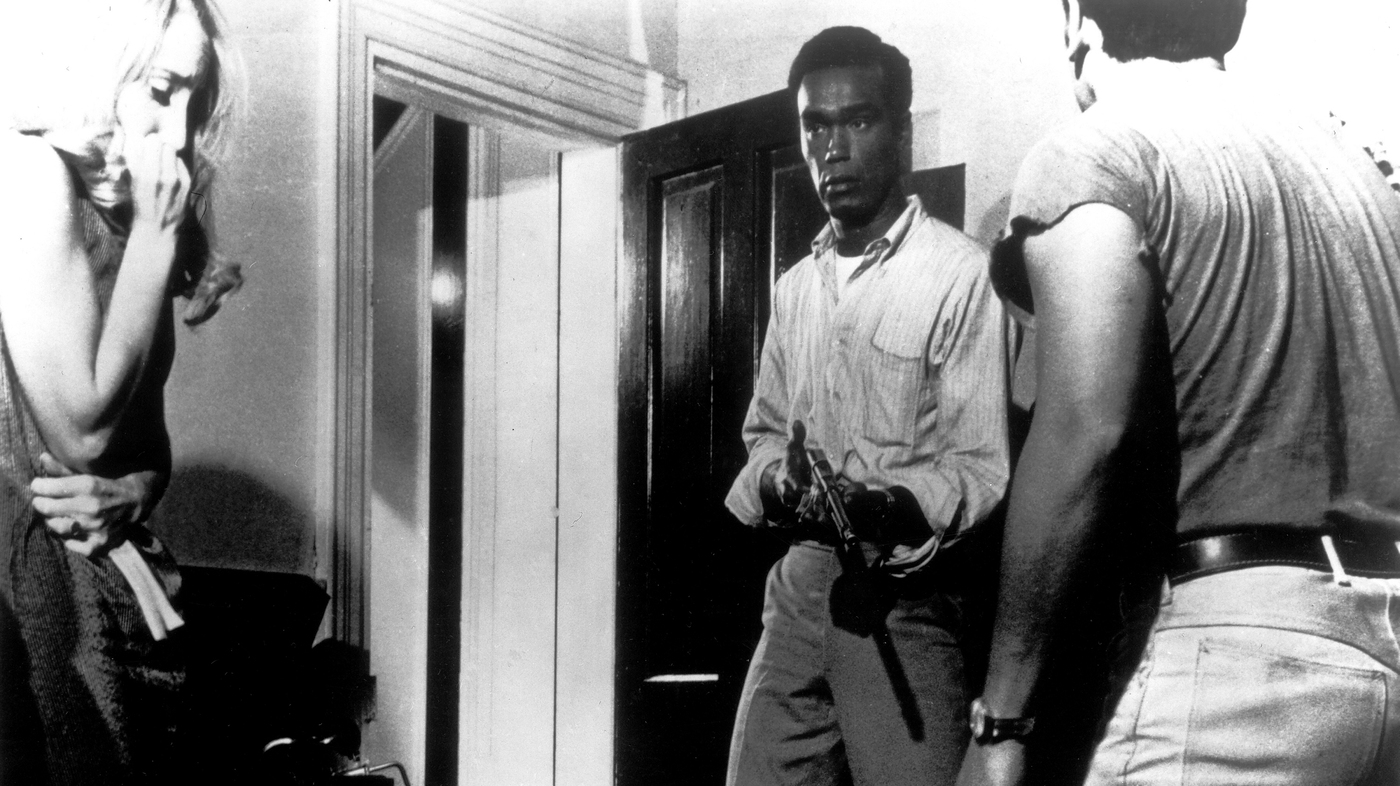 So there’s conflict even within families, a conflict not limited to Johnny’s teasing of Barbara. Helen is especially angry with her husband to learn there’s a radio they can use on the ground floor for information, but Cooper just wants to stay in the cellar, sacrificing the benefit of such information for an illusory security.

When the newsmen on the TV tell the survivors in the house of a rescue centre where they can take the Coopers’ sick daughter, Karen; and they know of a nearby gas pump they can fill up Ben’s truck with, Ben and Tom go out to the truck to get it (with Tom’s girlfriend, Judy, who foolishly joins them at the last second). But the plan fails, Tom and Judy get killed, and Ben tries to get back in the house…except Cooper has locked him out.

Ben manages to get back in, but after he and Cooper board up the door that Ben, Tom, and Judy had gone out of to get the gas, Ben throws several punches at Cooper, then says, “I ought to drag you out there and feed you to those things!”

So, once again, we see a lock of solidarity among allies against the zombies, and a mindless, needless violence that makes that of the zombies seem explicable in comparison. The mean-spirited foolishness among humans continues when Cooper later takes the rifle from Ben, right when he should be helping him keep the zombies from breaking into the house; and Ben fights with Cooper again, getting back the rifle and shooting his second-time betrayer.

But the connection between zombie-versus-human violence and human-versus-human violence is complete not only when we see, among the ghouls breaking into the house, zombie-Johnny taking and killing his screaming and struggling sister; but ultimately, when little Karen becomes a zombie. Her heartbroken and horrified mother sees her eating her dead father’s arm, and can only sob, “Karen…my baby…” The shock of this is greater than that of zombie-Karen stabbing her mother with a trowel.

Ben is forced to follow dead Cooper’s advice and lock himself in the cellar as the zombies flood the first floor of the house. When Cooper wakes up as a zombie, Ben, with a face as blank and expressionless as the zombies, cocks the rifle and puts a bullet in zombie-Cooper’s head. Then he does the same to zombie-Helen, and almost collapses in horror at what he’s been forced to do.

Meanwhile, a posse of zombie hunters goes out in the fields during the early morning. The sun is out, and it’s a new day…but the horror of the night isn’t over; for these hunters shoot zombies as mindlessly–and indiscriminately–as their prey have been killing and eating humans from the beginning of the film. Consider the blank expression on Sheriff McClelland’s face as he’s talking to the reporter and to his other men.

Consider also Ben’s fate. He’s the only survivor in that house. Though physically and emotionally exhausted, he has a trauma that keeps him vigilant enough to poke the rifle through a window at the approaching posse. They don’t even bother to check if he’s a zombie or not: they just put a bullet in his head, then throw his body on a bonfire.

In fact, Ben’s body is lain next to that of the first zombie seen in the movie, two characters as far removed from each other as they could possibly be–as different as black and white, not that the zombie hunters bothered to check, of course. Photo stills are shown instead of motion picture footage to show the bodies piled up, suggesting a moment of living death as the posse prove themselves no better than the zombies.

This is what I mean by mindless violence: the posse is just following orders. Just kill, kill, kill. Don’t stop to think if there’s any justification to kill a target. Don’t we do this in all the wars in history, making no distinction between enemy combatants and civilians? As we watch propaganda videos on our smartphone screens, staring at them like…what are they?…zombies?…, we mindlessly believe all the garbage our government tells us about which country is the latest ‘dangerous regime’ we must ‘destroy’ without any regard for the lives of the ordinary civilians, like Ben, who get killed, too.

We are the ghouls; that’s the ugly, rotten, corrupt truth of Romero’s film. We eat each other without thinking. This is why Night of the Living Dead is so terrifying. This movie is a mirror held up to ourselves. 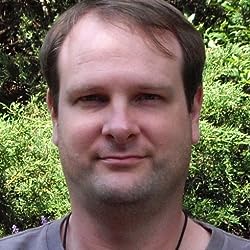 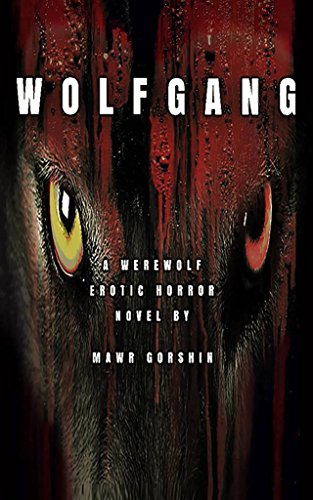