Creature Features in Review: Dark Was The Night (2014)

It exists, has always existed, but feels increasingly harder to find these days, especially in the horror genre.

No, I’m not talking about Bigfoot or the Fouke Monster or the Wendigo.

That “something” is sincerity.

There is a feeling of trepidation that accompanies this approach: earnestness of intent can spin out in wildly varying directions, depending on a filmmaker’s skill. When Hollywood makes a “message movie,” for instance, it is almost always undone by a heavy-handedness that assumes (perhaps rightly so) that viewers are just too stupid to get the point any other way.

In today’s horror climate, if you’re not regurgitating your favorite ‘80s scare sequences and winking hard and douchily as you do it, you run the risk of being labeled pretentious…or simply dismissed outright.

Dark Was the Night (Night hereafter) rolls the dice on telling a traditional horror tale – the stuff of old-fashioned campfire legend – and is mostly successful in its straightforward, no-bullshit approach.

The small-town setting and good-hearted characters thrown into an extraordinary situation recalls Stephen King, as do the backstories of Sheriff Paul Shields (Kevin Durand) and his deputy, Donny (Lukas Haas, rocking a Noo Yawk accent). Six months after losing one of his sons to a freak accident, Paul still grieves, and is estranged from his wife, Susan (Bianca Kajlich). When a mysterious creature, forced out of its native habitat due to deforestation, winds up in the town of Maiden Woods, it becomes a metaphor for Paul’s spiritual redemption and mustering the strength to move on with his life.

Night establishes its visual motifs early on: the cold exterior shots are couched in a steely, blue-tinted visual palette that’s appropriately severe, creating a mournful, downbeat mood. The sun always seems to be shining, but the world itself feels frozen; immovable. Conversely, the interiors glow with a kind of muted warmth. True to the title, director Jack Heller (a producer on many noteworthy recent horrors, including Bone Tomahawk and Some Kind of Hate) applies an encroaching blackness during the night scenes, to the point where characters are almost engulfed by it.

The cast complements the dreary mood. Character actor Kevin Durand may be best known for The Strain, his role as Robert Pattinson’s security detail in Cosmopolis, and one of the Tremor Brothers in Smokin’ Aces – but his hollowed-out performance as Paul exudes an earthbound reality. While the film may skimp on the reasoning why everybody in Maiden Woods “trusts” him, there is a virtuousness to his character that sees him wallow in grief, only to realize his greater responsibility to the townsfolk (whom he actually has a shot at saving). I don’t think I’ll ever be able to shake Haas as “that Amish kid from Witness,” but after acclimating to his character here, I genuinely enjoyed his performance. Donny is a decent person who relocated to the sleepy town for reasons atypical for this type of film, and plays the role straight (a lesser screenplay would’ve relegated him to an “odd couple” comedic foil for Paul). As Susan, Kajlich is motivated by an unflagging support for her husband; unfortunately, her dialog is rather obligatory, keeping the character from becoming three-dimensional. Like local shopkeep Clair (Sabina Gadecki), Susan is mostly around to provide support to the male characters, which is a missed opportunity in Tyler Hisel’s “man’s world” of a script. That being said, a supporting turn from the always-welcome Nick Damici (Stake Land) gives the story a grizzled boost of authenticity, and Heath Freeman – as the plot’s Resident Asshole – is given an interesting arc, in which he abandons his resentful demeanor by the time the third act rolls around.

Heller’s use of CGI is strategic – acknowledging Night’s low budget, he finds ways to camouflage the more overt effects by manipulating light and shadow, or relegating the menace to split-second flashes. Like a good, old-fashioned Creature Feature, we get our best look at the monster in the film’s final minutes, resulting in a greater impact for the viewer and Paul (who’s finally facing his literal and figurative fears).

While the build-up in Night may be too deliberate, it creates intrigue and mystery in a way that few horror films bother to. The setting is strong and atmospheric, and the characters exist with struggles and flaws that make them easily relatable. Its effort to tell a story in the vein of traditional, character-based horror mostly pays off, and its resistance toward dousing the proceedings in cynicism pays off even more.

Jonny Numb’s Rating: 3 out of 5 stars 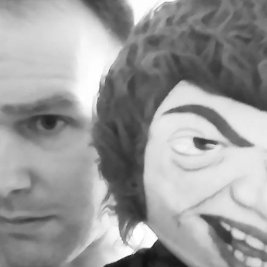 Jon Weidler, aka Jonny Numb, is no stranger here on Machine Mean. He has contributed reviews on Abbott and Costello Meet The Mummy (1955), Slither, AND Clean, Shaven. Mr. Weidler works for the Commonwealth of Pennsylvania by day but is a podcast superhero by night. He co-hosts THE LAST KNOCK horror podcast under the moniker “Jonny Numb,” and is a regular contributor to the Crash Palace Productions website and Loud Green Bird website. His archived movie reviews can be found at numbviews.livejournal.com, and his social media handle is @JonnyNumb (Twitter & Letterboxd). You can read his review of A&C Meet Mummy here.