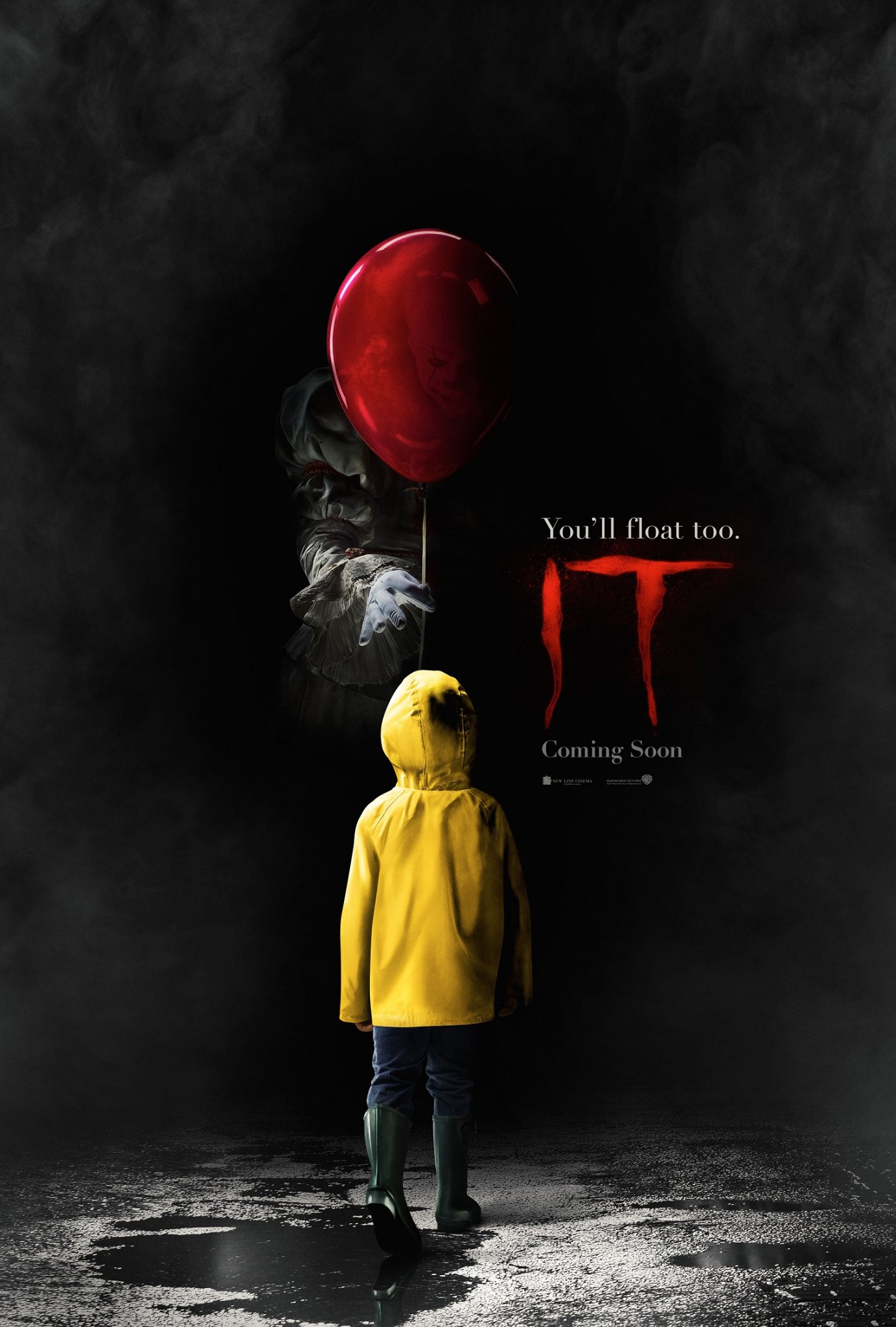 If you’re still reading this than I can safely assume you’ve taken some time to go see the latest of Stephen King novel to movie adaptations, It. This week on Machine Mean has been an It-palooza. With our very own Chad Clark bringing you a review of the novel in a three part series, including that very scandalous scene from the book, you know the one. And Chad and I both tackled a review of the original made-for-TV film from 1990. What better way to end the week than with a review on the new addition?

Here’s one of those wonderful IMDb synopsis’ of the 2017 take on It:

“A group of bullied kids band together when a monster, taking the appearance of a clown, begins hunting children.”

Hmm…I think we can do a little better than that, don’t you? Pennywise did not begin, he always was and has been a part of Derry since before there was a place to call Derry. Not sure how far back the movie got in that origin story that’s described in the book when Bill and Eddie get lost in the “deadlights,” a scene that really stuck out to me because it was so wildly imaginative. Trying to remember now, a year since I last read It, maybe it was the Turtle that showed Bill how It came to be in Derry, falling from an asteroid waaaaay before Maine was even a state, and even longer before there was such a place called America. Perhaps that inclusion in the movie isn’t necessary, but it was def one that I enjoyed from the book. What they did include was a fairly decent historiography of Pennywise and It’s connection to Derry. Enough to give the impression that this It isn’t normal; It isn’t human; It isn’t your typical child-murderer (god, if there is such a thing).

And since we’re on the subject of Pennywise…what a performance from Bill Skarsgård. Not since Jared Leto following Heath Ledger’s posthumous award winning role as the Joker has the performance of a clown been so crucial to the success of a film. While Leto’s take on the Clown Prince may be up to debate, I for one have zero hesitation to say that Skarsgård stole every scene he was in, much how Tim Curry had in the 1990 movie…only better. While I love Curry and everything he’s in, it wasn’t hard for him to outshine the cast he was given to work with. Those 1990 performances of the Loser’s Club was so hammy it only took about 30 minutes of cameo time for Curry to become the star, and 30 minutes is about all he had to work with to accomplish that. The same can’t really be said for Skarsgård. The cast he was given to work with are of a much higher caliber, in my humble opinion.

Speaking of the kids. What is the difference, if any, between the 1990 cast and this new 2017 assemblage? For me, it was chemistry. While the 1990 kids “part” of the movie was the only half I found tolerable, that’s not really saying much. To be honest, it was flat with only a few occurrences of well performed acting. Maybe its nitpicking, maybe its not. These are just my opinions, man. This new cast, I thought, really meshed well together, especially between Richie Tozier and Eddie Kaspbrak. The back and forth between those characters was priceless, and while Richie’s mannerisms felt forced every so often, it wasn’t distracting in the least. Eddie’s character was really well done compared to the 1990’s version, making him more in line to how I pictured him in the book. Yes, he was obsessed with germs of all kinds, and that was well captured too, but he was also a foul mouthed little shit. I was very happy to see this new film capture that side of him.

Beverly Marsh was a hell of a lot better this round too. The bathroom scene and her relationship with her dad, all of it was wonderfully tragic. Even the change up with Bev getting “captured” as the catalysis to why the Loser’s go after Pennywise for the final showdown was bearable. When venturing from book to film, changes will be necessary…but they have to make sense as a vehicle for the overall story. Ben Hanscom and Mike Hanlon’s stories were kinda cut short, mostly out of necessity for keeping the movie just over 2 hours, I’m sure. There was enough there though to give you an impression of who they were. I do wish they could have given them a few more scenes to establish them, such as Ben’s father (they didn’t even show his mother).

As the leader, Bill Denbrough was well developed. And his connection to his younger brother and the feeling of dread of having to go home every day and face that depression of his loss was captured magnificently, despite only have one scene with the mother (at the beginning playing the piano) and one scene with his dad. And his signature stutter was performed a hell of a lot better than that 1990 (excuse my french) fucking retard who clearly had never seen anyone stutter before. And since we’re talking about Bill, here is my standing ovation to that opening drainage scene between Georgie and Pennywise. I was very curious if they were going to hold back on the gore…and they did not disappoint. DAMN! That fucking scene was viscous as fuck. I was on the edge of my seat watching Georgie trying to crawl away with one fucking arm and Pennywise’s arm stretching abnormally out of the sewer drain to yank him back down. DAMN is that haunting. 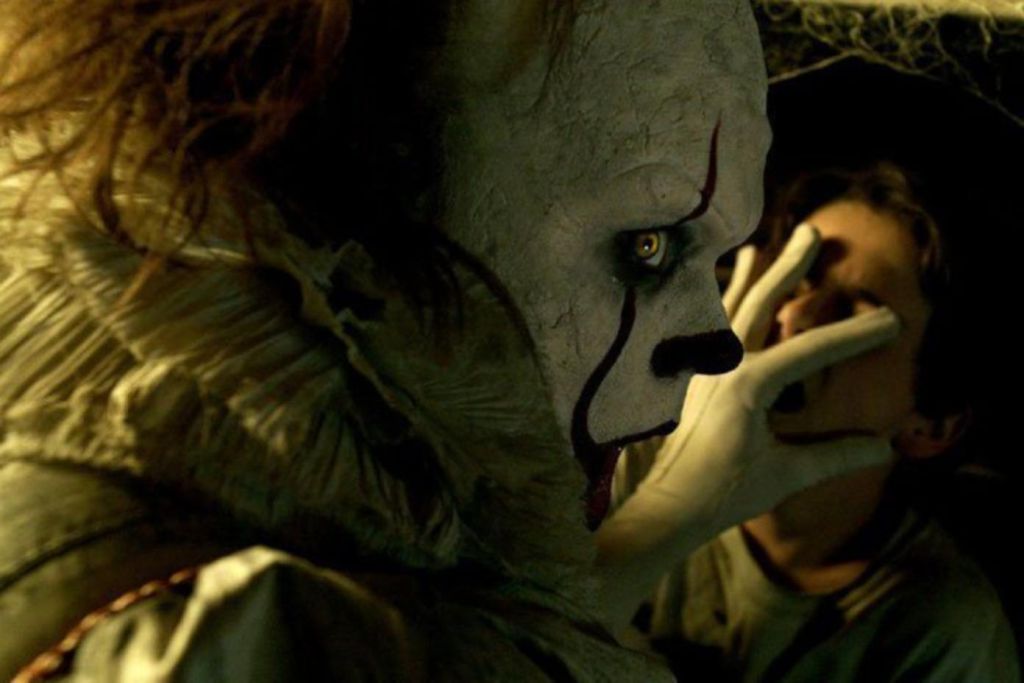 Speaking of FUCK ME scenes. Here is one of my favorites from the movie. Stanley Uris is preparing for his bar mitzvah and goes to return the Torah (I’m assuming that’s what that book was) to his father’s (the Rabbi) office. There’s a painting there that is freaking looking all its own. He’s obviously unsettled by it and as he goes to put the book away, the picture falls to the floor. Here we’re thinking Pennywise’s face is going to show in place of the woman, but no, the picture is empty, which begs the question: where did the lady go?  A flute is played behind Stanley and as he turns slowly, there’s the woman from the painting, a lady who is totes creepy as FUCK with an extremely narrow face and black eyes and sharp teeth…ugh!

There were a dozen other GREAT scare scenes, all played wonderfully by Skarsgård and the special effects team. And there were also plenty of non-scary scenes to help calm the nerves before the next assault, such as ALL the dialogue between the characters, the back and forth, the rock fight scene, and the swimming hole, simple moments that really highlighted how fun and dangerous it is to be a kid. That said, this movie really did feel like a fucking roller coaster of terror. Not a bad thing, but something unexpected from a King adaptation. King’s novels tend to simmer before they boil. Here…it was a constant boil in which will take more than one screening to fully capture everything that was thrown at you. As far as King adaptations, my favorite has always been that 70’s made-for-TV film of Salem’s Lot…but I think there’s a new contender in town with this version of It.

Who doesn’t love a good story? From those great works, such as All Quiet on the Western Front and Salem’s Lot, Thomas S Flowers inspires to create his own. His work ranges from Shakespearean gore feasts, feuding families, paranormal thrillers and haunted soldiers. Residing in the swamps of Houston, Texas, with his wife and daughter, Thomas’s debut novel, Reinheit, was published with Shadow Work Publishing, along with The Incredible Zilch Von Whitstein, Apocalypse Meow, Lanmò, The Hobbsburg Horror, and FEAST. His veteran focused paranormal thriller series, The Subdue Series, including DWELLING, EMERGING, CONCEIVING, and CONVERGING, filled with werewolves, Frankenstein-like monsters, cults, alter-dimensional insects, witches, and the undead are published with Limitless Publishing.

In 2008, Thomas was honorably discharged from the U.S. Army where he served three tours in Operation Iraqi Freedom. In 2014, Thomas graduated from University of Houston-Clear Lake with a Bachelors in History. He blogs at machinemean[dot]org where he reviews horror and sci fi movies and books and hosts a gambit of guest contributors who obsess over a wide range of strange yet oddly related topics. You can follow Thomas by joining his MONTHLY newsletter at http://goo.gl/2CozdE or following his author page here.