The most foreboding title among the horror and science fiction lexicon, besides perhaps IT or They (which is just a cheap knockoff of the more impressive film we’re about to discuss), is the 1954 masterpiece known as Them! Among the many different creature features, be it swamp critters or critters from space or super mutant hybrids, bugs freak me out the most. As defined by the omnipotent Wikipedia, “Entomophobia (also known as insectophobia) is a specific phobia characterized by an excessive or unrealistic fear of one or more classes of insect, and classified as a phobia by the DSM-5. More specific cases included apiphobia (fear of bees) and myrmecophobia (fear of ants).” Now, that being said…I think my “fear” can be measured by mass. The smaller the insect, the less I get “freaked out.” Hence, small little pests like flies and mosquitoes are simply put…pests, easily swatted or shooed away. But on the other spectrum, the bigger they get, the more I’m apted to run away screaming. If someone were to make a monster movie with the intention of provoking the mass amount of fear from yours truly, Them! would be the quintessential experience.

But it cannot be done in a silly way. If you want a serious reaction, the movie will need to have a serious undertone. Them! is a perfect example of this. As a fan of most dubbed “classics,” basically timeless pieces of cinematic history, be it 1930s or 40s or 50s or 60s or even those in the Silent Era, I took double pleasure in the fact that this now 63 year old movie can still capture that tension, that wonderful feeling of dread so fantastically. Them!, not too sound too fan-girlish, is utterly amazing. By modern standards, Them! easily tops what producers consider to be blockbusters in not just storytelling and characterization, but also special effects. It makes me curious what original audiences thought when they first sat in their parked fin-tailed red and chrome Chrysler’s at the local drive-in, WITHOUT having been desensitized by years of modern computer generated graphics.

Alas, those day’s are gone forever.

All we can do now is cherish the time we had.

For those who have not had the pleasure, here is a quick synopsis of Them!

“The earliest atomic tests in New Mexico cause common ants to mutate into giant man-eating monsters that threaten civilization.”

Boom. You don’t really need anything more than that, do you? Needless to say, IMDb isn’t wrong. In a nut shell, those are the stakes. A mutated strain of ants are multiplying in the New Mexico desert and could very well threaten civilization. And not just any mutated ant species, but a mutation of the Cataglyphis genus, better known as Desert Ants. These sand dwellers are among the most aggressive of ant. The perfect bugs to supersize for a horror/science fiction movie, right?

One of the fun aspects of Them! is how the movie starts off and is treated more or less throughout the entirety as a “detective” story. The movie opens with a patrol car doing their normal patrol and pickup a little girl, no more than six years old, strolling through the desert alone dressed in a nightgown and cradling a broken doll. They try talking to her but she is catatonic, speechless, staring blankly out at the brown sand. That feeling of dread we talked about begins to weave slowly into the movie and as the policemen investigate a nearby trailer, finding it mostly destroyed, pulled apart from the outside (they deduce) the tension builds even further.

The next scene certainly adds to not only the mystery but also the horror when police sergeant Ben Peterson’s (played by the very awesome James Whitmore) partner “disappears” off screen investigating a strange sound. He get’s off a couple of shots and then screams, that kind of scream that sends chills down your spine. The sound the officer investigates permeates throughout the entire movie. A familiar nature melody for anyone living in suburbia or out in the country. The sound of cicada or crickets singing in trees or in tall grass. Come summer, that sound is still quite pleasant to me, despite this film’s attempt to ruin it. Though, there is a lingering feeling of “what’s really making that sound? Are they, Them! watching me?”

And I love how, despite the excellent movie art on the  poster, knowing there will be giant ants in this movie, the story stalls the BIG reveal, forgive the pun, until the absolute right moment. And that moment, much how the newly brought on character, FBI agent, Robert Graham (played by man’s man James Arness), to its frustrating conclusion through the “comic relief” of sorts Professor Harold Medford (played by Santa himself Edmund Gwenn) and his “if a boy can do it a girl can do it too” daughter Dr. Patrica Medford (Joan Weldon). The Dr. Medord’s are not really that comedic, the old man is sort of how we might think brilliant old men are, a tad absent minded to every day tasks, but a genius in their preferred fields of study. And the female Dr. Medford, despite her strong grace of femininity, wasn’t overpowering or preachy. She was meek but smart and willing to go places most men wouldn’t dare go. In a decade before feminism really took off in America, it’s hard to place the purpose of her character. Regardless, I was and am very pleased with her performance, second to her father perhaps, how she was not the ditsy romance how most other movies place actresses. Harold may have been love struck, but everyone else called her Pat, a genderless name, and I prefer it that way.

The reveal was perfect, as I said. A sandstorm kicks up and everyone’s goggled and stumbling around for clues. Somehow Pat get’s separated from the group. That chilling buzzing, ringing, clicking cicada sound starts again, getting louder and louder, and everyone is looking around wondering what that noice is and where it’s coming from. Above Pat on a dune, emerges a large black head with giant orb eyes long furry antenna and large sharp looking mandibles. She screams, alerting the others who begin opening fire, destroying the ant’s antenna (to the suggestion of Dr. Medford). The ant is killed and while the others are staring at this impossible horror, Dr. Medford makes a statement, the inspiration and message of the entire movie, I think. He says, “We may be witnesses to a Biblical prophecy come true – ‘And there shall be destruction and darkness come upon creation, and the beasts shall reign over the earth.'” He says something very similar towards the end of the movie, stating, “When Man entered the atomic age, he opened a door into a new world. What we’ll eventually find in that new world, nobody can predict.”

Full of sparking large logos and flashy gadgets and a new generation of fast food and drive-in theaters and modern jazz and rock-in-roll, but this was also an era of uncertainty. Hiroshima and Nagasaki awakened something in humanity. Something more than just awe and dread. Something darker and more pious than religion. The Atomic Age was this new fear of the bomb. Uncertainty over world powers, the growth of the Cold War, and a horizon in modern science to which many did not understand. Not knowing is the greatest fear of all, at least according to H.P. Lovecraft. The Atomic Age also gave birth to this very feature we find ourselves enjoying (hopefully), the birth of unnatural monsters such as Godzilla and Them! Better known as Creature Features.

Them! acts as a cautionary tale. Be warned, what will await us on the other side of the door. Will science bring upon us destruction and darkness? Will man’s ignorance? Them! isn’t about the dangers of real giant bugs, its about consequences. That in everything we do or strive to bring about, for every action there is an equal and opposite reaction, as Newton had once said. Its a message every new generation hears, right? Cautionary warnings from the old folks rocking on the porch, talking about how things used to be. The rest of Them! takes on that similar detective story we were introduced to in the beginning. They hunt down the hive and destroy the giant ants with poison, only to discover a few  queens had escaped prior. Now the once localized investigation turns into a global event. Hush hush, of course, to avoid widespread panic, the team with the added benefit of the military and select government officials quickly work to destroy Them! But the movie doesn’t end like some monster movies with the creatures being destroyed…there is a feeling of uncertainty, astute given the era, and we are left wondering if perhaps there are more giant mutated ants out in the desert thanks to atomic weaponry. And as Dr. Wedford said, “nobody can predict.”

Who doesn’t love a good story? From great works such as, All Quiet on the Western Front and Salem’s Lot, Thomas S. Flowers has a passion to create similar character-driven stories of dark fiction ranging from Shakespearean gore fests to paranormal thrillers. Residing in the swamps of Houston, Texas, with his wife and daughter, Thomas has published several novels, including, Reinheit, The Incredible Zilch Von Whitstein, Apocalypse Meow, Lanmò, The Hobbsburg Horror, Beautiful Ugly and other Weirdness, Feast, and PLANET OF THE DEAD. In 2008, Thomas was honorably discharged from the U.S. Army where he served 3 tours in Operation Iraqi Freedom as a Military Police Officer. In 2014, Thomas graduated from University of Houston-Clear Lake with a Bachelors in History. He blogs at http://www.machinemean.org, where he contributes reviews on movies and books along with a gambit of guest writers who discuss a wide range of strange yet oddly related topics. Follow Thomas on his website www.ThomasSFlowers.com.

Discover BEAUTIFUL UGLY and OTHER WEIRDNESS eBook, paperback, or audiobook!!! 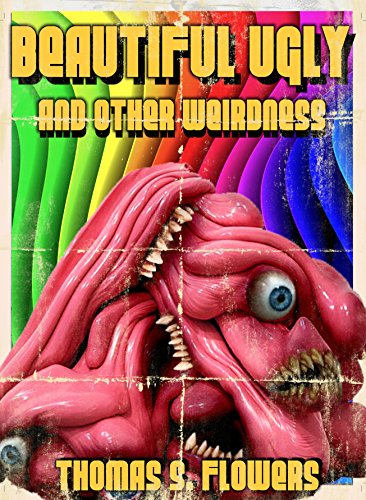