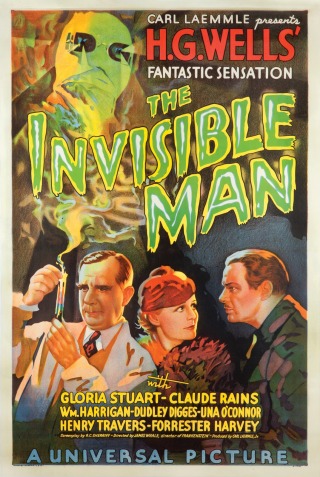 Of all the Universal classics, The Invisible Man was one of the few I’d never taken the time to watch. This past weekend, I alleviated my curiosity and found myself, as you’ll note from the below review written by the fantastically talented Duncan Ralston, surprised how different the pace is from the other Universal films. This is a tale about a mad scientist, but instead of boring audiences with the details of his experiment gone awry, we delve into a sprawling story of madness and revenge. Some other notes I found interesting were the references to disfigurement, as The Great War was not far from the minds of screenwriters, becoming part of the cinematic landscape in the form of mangled images. The “disguise” of Jack in the opening of the film reminded me very much of some of the images from early silent pictures, such as 1928’s The Hands of Orlac or even 1925’s The Phantom of the Opera staring the Man of a Thousand Faces. Beyond here, there story for The Invisible Man takes on its own linage, more than about vengeance, and perhaps more in terms of madness and the things we (humanity) mettle in. Without further adieu, lets see what Mr. Ralston has in store for us.

Something I’ve heard a lot these days is that old movies are too slow, too boring. This is sometimes a fair criticism. In modern movies, it’s argued, the viewer is shown only the scenes they need. Countless movies prior to the 1980s give us scenes and dialogue unnecessary to move the story forward.

The Invisible Man is not that movie.

Smoke swirls in a howling wind as the credits play, introducing the main character as “the Invisible One,” rather than the Invisible Man. He blows into the Lion’s Head Inn on a snow storm, wrapped for the cold in a long trench coat, full face wrap, dark goggles and gloves. The tavern regulars gape at him. While the housemistress takes him upstairs, the regulars theorize about him, small town gossip: he’s an escaped convict, or he’s snow blind, or he’s disfigured. She catches him with the lower part of his wrap off his face, and tells people he’s been in a horrible accident.

From here, we discover what happened to the Invisible One. Jack, a scientist, has been missing for a month. His fiance and partners are worried about him, as he left a note saying he would return when he’s solved his predicament. The scene with the scientists is a bit of an info dump, but it’s not very long before we’re back with the Invisible Man we now know as “Jack.” He’s working on an antidote at the Lion’s Head Inn, but he keeps getting interrupted. He finally reveals his invisibility, pushing her husband down the stairs, throwing things and knocking stuff over during his escape. He steals someone’s bike and peddles off on it, fully invisible.

The thing that struck me most about this movie is how fast-paced it is. There’s a remarkable amount of story and character thrown into its hour and ten minute runtime, and yet it doesn’t feel rushed. Some scenes play out quickly, others are allowed to linger.

Another great bit is all the “poltergeist”-type wire gags, where Invisible Jack moves objects, has tantrums, beats people up, and prances around laughing like Scrooge on Christmas morning. These scenes are great fun, and look surprisingly good for the era. The effects don’t work quite so well when Jack is clothed while invisible, a black outline around his clothing unable to be removed during rotoscoping. These scenes were at first considered “unfilmable,” and effects work took up four months of production. Effects guru John Fulton said when he was given the script in 1933, “It bristled with difficult special process scenes, and I wondered if, even with our modern process techniques we could possibly make all the amazing scenes called for.” 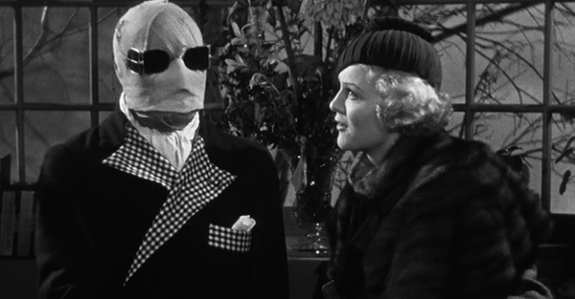 Once Jack’s evil plan is unveiled–which amounts to causing general mayhem, such as murder (“small at first”), and derailing trains–the police are hot on his trail. The montages of the police plotting and executing his capture are brilliantly paced, and the police don’t lose him due to Keystone Cop shenanigans, as one might expect in an older movie. They’ve conceived a decent plan, and only fail initially because of an accident of fate. Something I thought while watching these scenes is that they might have formed the foundation for every Authority Against the Vigilante sequence in almost every modern superhero movie.

I haven’t read H.G. Wells’s The Invisible Man in maybe 20 years, but from what I remember of it, it differs a lot from this adaptation. For one thing, I remember a lot of Jack dealing with his predicament, where in the 1933 Universal film most of that is cut in favor of action. But maybe I’m mixing this up with Richard Matheson’s The Incredible Shrinking Man. I do recall he was seeking revenge at one point on the partner who betrayed him? Stole his work? I don’t recall. Revenge is only briefly touched on in the movie, but for a different reason.

All in all, Universal’s The Invisible Man is an entertaining film that suffers slightly from a few corny lines, female roles that border on the “hysterical” (not hysterical ha ha, hysterical as in screaming at every opportunity), and by starting in media res, with Jack already a maniac, it doesn’t quite work as a tragedy.

Those few flaws aside, The Invisible Man is well worth a watch. It must have been a Herculean undertaking to put this film together using the practical effects at the time, and for audiences to have believed they’d actually seen an invisible man, as some critics mentioned, is something few modern movies with effects costing multiple millions can manage. 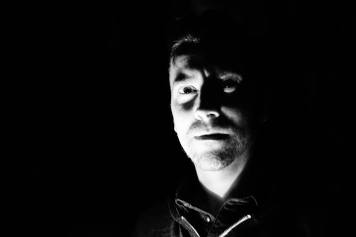 Duncan Ralston is not just a wonderful human being, but also the author of Salvage: A Ghost Story, and the horror collection, Gristle & Bone. He’s been published in a various of anthologies, including The Black Room Manuscripts and The Animal, and the upcoming anthology, Easter Eggs and Bunny Boilers. You can follow and chat with him at www.facebook.com/duncanralstonfiction and www.duncanralston.com.

This entry was posted on February 17, 2016 by Thomas S Flowers. It was filed under Horror, Reviews and was tagged with Duncan Ralston, H.G. Wells, Horror, horror review, Reviews, The Invisible Man, Universal Classics, Universal Monsters.