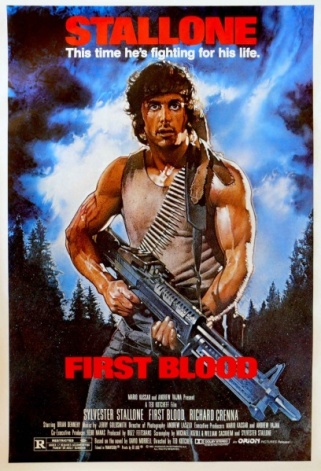 Understandably, when people hear “First Blood,” they initially think “Rambo.” Rambo is this 1980s visage of the ultimate warrior, supreme bad ass, take no prisoners kind of guy. There was a short-lived cartoon based on Rambo back in 1986 called “Rambo: The Force of Freedom.” It was a short-lived series. There was also a video game, released in 1987 and a sequel, released in 1988. There were also lunch boxes with matching thermos. And let’s not forget the action figures and tee shirts with the logo “No Fear, No Regrets” written beneath these soul-glow wavy haired maniac holstering an M60 machine gun. Rambo is very much a pop icon, I often wonder if audiences really grasped the intelligence and emotional rawness of First Blood. Sometimes I feel that audiences who adore “Rambo” as the action hero pop star have abandoned if not totally ignored the character from the first film. John Rambo certainly does his fair share of ass whooping in First Blood, but ultimately, he’s a tragic character, scarred, not just physically but emotionally. He’s been traumatized and doing his best to live with the memories he carries with him. What kind of memories? Well, consider this little snippet from the end of the film (I know, I know, big bad SPOILERS…whatever, get over yourself, this movie has been out for 33 years!). In this scene, John has pretty much laid waste to the small town of Hope, Washington. Colonel Sam Trautman, his former commander, has arrived to attempt to talk John down. Confused, John tries to make sense of everything. He shares a particular memory with Trautman, who being an officer, was probably removed from most of the violence in Vietnam.

“We were in this bar in Saigon and this kid comes up, this kid carrying a shoe-shine box. And he says ‘Shine, please, shine!’ I said no. He kept askin’, yeah, and Joey said ‘Yeah.’ And I went to get a couple of beers, and the box was wired, and he opened up the box, fucking blew his body all over the place. And he’s laying there, he’s fucking screaming. There’s pieces of him all over me, just… like this, and I’m tryin’ to pull him off, you know, my friend that’s all over me! I’ve got blood and everything and I’m tryin’ to hold him together! I’m puttin’… the guy’s fuckin’ insides keep coming out! And nobody would help! Nobody would help! He’s saying, sayin’ ‘I wanna go home! I wanna go home!’ He keeps calling my name! ‘I wanna go home, Johnny! I wanna drive my Chevy!’ I said Why? I can’t find your fuckin’ legs! I can’t find your legs!” 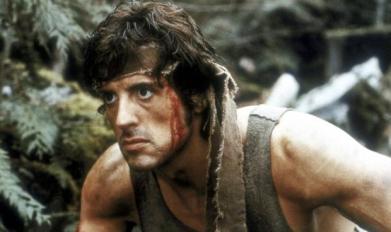 When a quote like this comes out of a guy, covered in sweat, grime, and blood, laying on the floor, half whimpering, half screaming, it’s hard to look at First Blood as nothing more than an exploitative action-violence movie. First Blood is more than that, despite all the lunch boxes and action figures and tee shirts. This movie has substance. First Blood was a movie about PTSD before PTSD was even considered a counterpart with war trauma. First Blood also discusses very “in-your-face” regarding the treatment of Vietnam veterans in America culture. The small mountain woodsy town is called “Hope” for crying out loud. Stallone wanders through Hope finding nothing but abuse and then so he rips the decorum off “Hope” through a series of wanton destruction, almost laying the sheriff’s office flat, the supposed symbol of justice. This all, of course, begs the question: What justice is there in any of this?

“Vietnam veteran and drifter John J. Rambo (Sylvester Stallone) wanders into the small Washington town called Hope in search of an old friend, but is met with intolerance and brutality by the local sheriff, Will Teasle (Brian Dennehy). When Teasle and his deputies restrain and shave Rambo, he flashes back to his time as a prisoner of war and unleashes his fury on the officers. He narrowly escapes the manhunt, but it will take his former commander (Richard Crenna) to save the hunters from the hunted.”

Janet Maslin from the New York Times reviewed First Blood back in ’82. She said, “The emphasis is clearly on toughness and versatility, as a battered, bloody Mr. Stallone demonstrates a wide range of scouting skills, from building traps to exploring a pitch-black cave; he is also able to slaughter wild animals and give himself stitches. He corners the sheriff’s men a number of times, and invariably he is good-hearted enough to let them go. The movie tries hard to make sure that Rambo will be seen as a tormented, misunderstood, amazingly resourceful victim of the Vietnam War, rather than as a sadist or a villain.” On this part, I’d agree with the movie critic, though understandably as a combat veteran myself, the movie affects me perhaps a little differently. There is no denying the simplistic quality to the script. There’s nothing complicated with the dialogue. Miss Maslin’s comment regarding Rambo being “the good boy scout” was interesting to me. This connotation connects Rambo to another Vietnam movie, The Deer Hunter. Yes, while The Deer Hunter is most certainly more complex in story, the character Micheal Vronsky, played by the impeccable Robert De Niro, is represented as the ultimate outdoorsman, a man’s man, the ultimate boy scout if you will, who becomes this mythological Superman of Vietnam. In a strange way, perhaps we could look at Rambo as the continuation of Vronsky’s story. Or perhaps I’m reaching a bit here!

To be fair, First Blood does reach a bit toward the end, despite the powerful last scene mentioned earlier in this review. While personally, I  focused on Rambo as the suffering veteran, some portions of his dialogue leave one wandering the wasteland of Hope, pondering just who cost us the Vietnam war? Rambo laments about the “hippie scum” who spit on him at the airport or the liberal politicians who “wouldn’t let us win.” These thoughts would be more fleshed out in the next installment, Rambo II, as Rambo returns to Vietnam in search of those we “left behind.” But all of this begs, even more, questions: “Just who did we leave behind?” “Who lost the war?” “How did we lose?” “Did we need to bomb more villages?” “Did we need to send more men?” etc. etc. This sadly leaves one with a very surface level understand of the war. If we were to pull back and look at John Rambo as the suffering veteran, could we even afford to send more into the hell pit that was Vietnam? Or any war for that matter? Yet, intermixed with the convoluted “stabbed in the back” attitude, there are glimpses of real problematic cultural relations with society and combat traumatized veterans. Here is another quote from John Rambo for you to chew on.

“Nothing is over! Nothing! You just don’t turn it off! It wasn’t my war! You asked me, I didn’t ask you! And I did what I had to do to win! But somebody wouldn’t let us win! And I come back to the world and I see all those maggots at the airport, protesting me, spitting. Calling me baby killer and all kinds of vile crap! Who are they to protest me, huh? Who are they? Unless they’ve been me and been there and know what the hell they’re yelling about! …For me civilian life is nothing! In the field we had a code of honor, you watch my back, I watch yours. Back here there’s nothing! …Back there I could fly a gunship, I could drive a tank, I was in charge of million dollar equipment, back here I can’t even hold a job parking cars!”

As I said, very provocative. Beautifully so, I think.

Okay. Moving beyond the social-political undercurrent. First Blood had a great pace and mood that was very captivating and entertaining. While there was some cheese-crusted acting by some of the supporting roles, I felt Stallion did a rather impressive job as a sober, traumatized character. If you haven’t seen this one yet or skipped it (FOR SHAME!), you need to watch it. Netflix recently released all the trilogy on instant viewing.