The imagination of horror writers can be…precarious, at best, if not down right odd and strange and every bit unusual. Writers of horror tend to go to some rather appalling places. Venturing in the great unknown, the unfathomable dank pit of the human heart or the human psyche. Horror writers seek the worst in us to find the best in us, if it exists at all. But where do horror writers get their ideas? Where do they find the tools to show us what we’re often to scared or uncomfortable to see? Certainly, from the world around them. No doubt. For the world, historically speaking, can be both terrifying and gut-wrenching. But perhaps equally important, horror writers hone the craft from reading the works of others. It most certainly feels like a prerogative. To write, you must read. Thus, here with Opus Questions we delve into this line questioning. What do horror writers read? What works have helped shape their own words. What books have inspired these wordsmiths of the macabre? So, to keep things interesting and to be a bit villainess on my part, I’ve asked my guests to tell us what their favorite books are and why. And they can pick only two. You heard me. Just two!!! (laughs manically) So, without further ado, here is…

Thomas Flowers III recently asked me if I would review two of my favourite horror books. Two? How was I going to review just two out of the plethora of fantastic books that I’ve enjoyed? Which two had truly stuck with me since first reading them.

The answer to that was much easier than I thought.

When I was a kid, Steve Jackson and Ian Livingstone were producing the Fighting Fantasy series of Choose Your Adventure Books. I remember eagerly waiting for the each one to come out, waiting for it to whisk me away to some fantasy world on a wild adventure. That was until they released book 10 – The House of Hell. 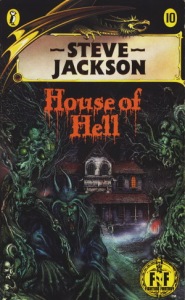 This time Steve Jackson changed the rules. It wasn’t an imaginary fantasy world. This was contemporary, this was set maybe somewhere you knew, and that real world grounding made it seem more vivid and real to my nine year old mind than anything the previous nine books had done. The mist enshrouded house on the cover boarded by gangrenous things both attracted and repelled me, but more than anything I knew I wanted to read this story!

As with all Choose Your Own Adventures, the writing was in the second person, everything that happened was described as happening to YOU. You are no longer the passive reader of someone else’s story. You are the active participant of the story, your choices leading you down different corridors of the old rambling house bringing you face to face with goat-head wearing devil worshippers, shambling undead, ghosts, tortured prisoners, demons, and the one who always sticks in my mind for some reason – an old torturer. Play your cards wrong with him, and you ended up locked at his convenience for the rest of your increasingly painful life.

A new element introduced in The House of Hell was that of a Fear stat, rolled up with the others of Skill, Stamina & Luck, before you even began the story. It was your character’s breaking point. If you ever exceeded your Fear stat, your character was assumed to have become catatonic and left gibbering on the floor of the House, fate unknown but unlikely to be pleasant. Just the inclusion of this one new stat made the offer of exploring each room, each darkened passageway, wrought with tension especially towards the end of the book.

The vivid descriptions within the pages of the House of Hell, together with the beautifully illustrated black and white plates throughout evoke such a sense of growing terror the more you discover about your situation that I was hooked from my first reading. My imagination eagerly filled in the blanks deliberately left in the writing. Best of all, Jackson pulled no punches with his story. This was a book for kids, and yet the content, writing, and illustrations wouldn’t have been out of place in an 18 certificate.

I can’t think of another book I’ve read that comes close to the sheer terror House of Hell gave me.

My second choice is John Wyndham’s The Day of the Triffids. The thing I love about John Wyndham’s books is the slow creeping unease that he builds from the get go, and Day of the Triffids is no different. From the narrator, Bill, waking up in hospital, head wrapped in bandages, listening to the disturbingly silent London through the descriptions of the blinded citizens stumbling, bumping into each other, as they fumble their way along the streets to the (admittedly, info-dump) background. There is an unsettling feeling of danger, undercurrents of violence born of fear from the blinded populous and the greater menace of the Triffids lurking, waiting to attack, kill, and consume.

Wyndham portrays the collapse of a capital city in a completely believable way, while those stricken blind struggle to find their way through the now silent streets. Collisions between people resulting in angry, frightened, verbally and physically attacks at unseen attackers. In the distance, fires burn their way through houses. We are never told how they were started, and perhaps it’s for the best we are never shown their outcomes. We are fed just enough to allow our minds to wander and wonder at their causes, and consequences.

For me, the greatest sense of terror that Wyndham creates revolves around the whole sense of being blind and vulnerable, the fear that generates, and what that fear does to ordinary, normally genteel, people. Forced to be reliant on the goodwill of the few scattered people who can see, knowing that should anything happen to them their chances of survival are next to nil.

Peppered throughout Bill and, later, Josella’s explorations of London are several time where they stumble across people stricken blind, and unable to cope with their new condition opt for suicide. These incidents are often fast and unexpected, shocking both the main characters and the reader alike, leaving one to wonder what you would do in their situation.

The Triffids themselves, for me, almost take a backseat throughout most of the book. For me they are a menace, in much the same way as the Martians are in War of the Worlds. They have superiority over Humanity and become a background threat to poke the main characters with every so often, but the real horror comes from the ways and lengths the various characters use and abuse others while trying to survive in this new post-apocalypse world. 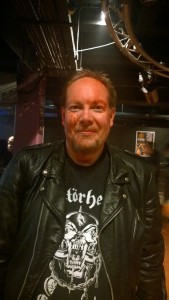 I want to thank Paul for taking the time and telling us a bit about the works that have haunted his dreams and have shaped his own writing. You can find Paul on Facebook. He posts his words of macabre on writing(dot)com. Paul will also be featured in the up and coming horror anthology The Black Room Manuscripts, due to release summer 2015.

This entry was posted on April 6, 2015 by Thomas S Flowers. It was filed under Horror, Reviews and was tagged with author interviews, books, fiction, Horror, horror writers, house of hell, John Wyndham, opus questions, Paul Townsend, Reviews, Steve Jackson, The Day of the Triffids.