Horrible Women, or my favorite women in horror

With February being Women in Horror Month, I thought I’d do my part in honoring the many women who’ve made the genre I love so bloody fantastic. Women who have broken boundaries and defied not only gender clichés, but also social and cultural as well. Now, in all honesty, horror is not with its own stereotypical tropes, but in fairness, horror has also done more to mangle down those grey stone walls of truism. Slasher movies for one have a nasty habit of typecasting women into weak character roles. Yet, looking at it from another angle, you might notice that as said slasher movie victim is running around bumping into dead things and screaming at the top of her lungs, she survives while typically every single if not 99% of the male character population parishes in some grotesque way. At the very least, perhaps even slasher movies are saying that when the shit hits the fan, women are survivors. 2013’s home invasion horror movie You’re Next may or maybe count as a slasher flick (we’re going to roll with it), but in the film while there are a few damsels in distress, Erin Hanson (played by the beautiful Sharni Vinson) utterly dominates the movie, chewing bubble gum and kicking ass, taking no prisoners. To say the only contribution women have made for horror is to play its victim is a gross generalization. In movies where women are intended to be the victim, they survive. And then there’s the other side of the road. The villains. The most creepiest characters and monsters of horror, in my humble opinion, have been women. Consider Kathy Bates in Misery and you tell me if her portrayal as Annie Wilkes didn’t creep you the F out! Lets all be honest here, lets put aside our egocentric macho bullshit and come clean. Lets admit it, women have done more for horror than men. So, without further ado, here are a few of my favorite horrible women!

Let the Right One In released in our most desperate hour, during a very strange and scary time for vampire tropes. I hate to mention here on my blog, but it needs to be said, in 2008, vampire lore had been polluted with Twilight-esk glowworm sparkle making me want to scream for trying to ruin a classic horror monsters! Yuck! And thank Zeus those days are over. Let the Right One In was an welcomed breath of fresh air, an absolute amazing horror flick. And Lina Leandersson playing the century’s old vampire Eli was magnificent. She was so innocent until she wasn’t. The best scene has to be at the pool when Oskar is confronted with some rather violent bullies. You do not see her inflict the carnage, but when Oskar comes out of the pool and you see all the gore surrounding this small adolescent girl, it is a utter chilling moment in horror history. Her portrayal as his protector was totally believable. The American remake was decent, but for this list I have to go with the original Swedish version. It was by far the superior.

What can really be said about our favorite doubting Special Agent? The X-Files had a huge impact in my life growing up. And the show is still good. Better than most of what passes as TV nowadays, not to sound like some bitter old man. Gillian Anderson’s portrayal as Dana Scully is interesting. She’s the yin to Fox Mulder’s yang (not to sound dirty). She was the rational part of the relationship, Mulder was the wide eye dreamer who jumped at any and all shadow that spelled conspiracy or extraterrestrial or both. She was a skeptic, sure, but she had to be to level out Mulder’s eccentricism. She was also the scientist, the doctor, the brains of the operation. Her portrayal is interesting because its a role typically played by men. Are men not the more rational? DON’T ANSWER THAT! (cough-cough, wink-wink).

Though the first time Miss Weaver portrayed Ellen Ripley was in Alien (1979), she did not feel to me as strong of a character as she was in its sequel, Aliens. She was a survivor, for sure in Alien, but in Aliens she kicked some major xenomorph ass! In James Cameron’s epic sci-fi horror, Ripley was easily the strongest character not only because of what she did, but the fact that she did it while struggling with PTSD, struggling with the memories of the traumatic events from the first film. She was a protector when at times you felt she was the one needing protection. Hell, she came out on top while every single one, save Hicks, of the supposedly badass Colonial Marines gets bush whacked! She even goes toe to toe with the “get away from her you bitch” queen bee! Aliens is an excellent movie for many reasons, but the best is watching Ripley transform from traumatized survivor to tuff-as-nails She-Ra! 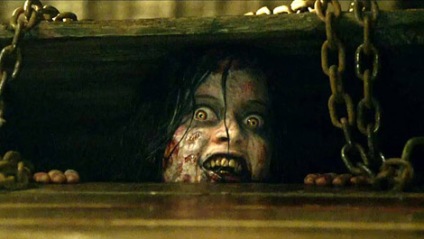 I have no idea what some nerds have against this movie. It is absolutely fantastic. It wasn’t a reboot, it wasn’t a remake, it wasn’t a continuation; 2013’s The Evil Dead was simply another cabin-in-the-woods movie cast in an Evil Dead universe. The mood from the very beginning is grainy and dark, given the subject matter of Mia’s rehabilitation with drug addiction. And it just gets darker. And her struggles felt real. And when the table turns and her inner-demon, as they say, comes out…her creep factor goes sky high! It was fun watching Mia start off playing the victim of the demon that had taken hold of her, and then in actuality becoming the monster (and scary one at that!). And it was satisfying seeing her, by the end, transform into a person willing to literally and metaphorically come out swinging. Mia was not some Ash trope, she was her own character, and a strong and realistic one at that.

While I struggled between Gaylen as Francine in the original and Sara Polly as Ana in the 2004 remake, because I feel both characters and women were strong in each of their respective films, in the end I had to go with Gaylen Ross. Blame it on my favoritism to the original classic or on my love for Romero or whatever you want. Regardless, who can deny the magnetism in Ross’ portrayal as Francine? She was a lone woman surrounded by male machismo and was still able to keep her voice heard over all the grunts and farts. From the very get-go, when they land at the mall and she states “Stephen, I’m afraid. You’re hypnotized by this place. All of you! You don’t see that it’s not a sanctuary, it’s a prison! Let’s just take what we need and get out of here!” Yet, while being overruled by the male majority, she remains patient and lets it slide until her prophecy becomes reality. Of course, her best line is when the boys hatch a plan to secure the mall without consulting her and she confronts them with her own demands, telling Stephen mostly to never leave her without a gun again because (she states mockingly) “I just might know how to use it.” And what’s more interesting is that she is not only the lone woman in the group, but also pregnant. That in itself says something to the strength of her character to deal with these boys and keep her cool in the midst of a zombie apocalypse.

Linda Blair as Regan MacNeil in The Exorcist (1973):

As horror director and visionary Tom McLoughlin put it (and I’m paraphrasing here) Linda Blair as Regan was everything sugar and spice and everything nice, and she was set up so beautifully pared with her mother, but when she turned on us she became is absolute terror because while she is being victimized by the demon (or demons if you have read the book) she is also the monster, this evil thing that is in total control. Linda Blair did such a marvelous job with her role that The Exorcist is without argument the scariest movie ever made. But it was not just Blair and Regan that made the movie sensational, it was also Ellen Burstyn as Chris MacNeil, a strong independent single mother, balancing a profitable career and parenthood. Both actresses deserve mention as this list.

I wanted to give Ashley Laurence’s portrayal as Miss Cotton credit in both films because she was pretty much the same character types in both films, though you can imagine that in Hellbound she was struggling more with the hellish (no pun intended) events in the first movie. Miss Cotton was a believable loving daughter who did what she could to love her step-mother, but as they classic trope demands, her step-mother was quite wicked and unlovable. I love Cotton’s character. She’s not weak necessarily. She is a survivor. And she most certainly has her wits about her during times of tribulation. Consider the moment in Hellraiser when she first opens Lemarchand’s box (aka The Lament Configuration, aka The Puzzle Box). When the cenobites first appear, though terrified, for obvious reasons, she is still able to keep her cool and hatch a plan to trade her life for Frank’s. And at the end, when the cenobite attempt to alter the deal she sends each and everyone of them back to hell via solving the puzzle box. In Hellbound, though traumatized, she not only confronts the return of her wicked step-mother, Julia, but manages to humanize Pinhead (Doug Bradley) and the other cenobites, turning them back to their original self’s. Clare Higgins also deserves mention here. I was not impressed with her portrayal as Julia in the first Hellraiser, her character was too needing of Frank to stand on her own. But in Hellbound, the gloves came off!! She was a strong and dominate villain, blood thirsty and seductive, even without skin. Yet, despite strong acting from Higgins, I’m more favorable toward Laurence as Cotton. She was smart and foul mouthed, a perfect combination.

Well, there you have it folks! Just a few favorites from the numerous women who have not only embraced, but also defined horror. Who are some of your favorite women in horror?

Thomas S. Flowers creates character-driven stories of dark fiction ranging from Shakespearean gore feasts to paranormal thrillers. Residing in the swamps of Houston, Texas, with his wife and daughter, his debut novel, Reinheit, was published with Shadow Work Publishing, along with The Incredible Zilch Von Whitstein, Apocalypse Meow, Lanmò, The Hobbsburg Horror, and FEAST. His veteran focused paranormal thriller series, The Subdue Series, including Dwelling, Emerging, Conceiving, and Converging, are published with Limitless Publishing, LLC. In 2008, he was honorably discharged from the U.S. Army where he served three tours in Operation Iraqi Freedom. In 2014, Thomas graduated from University of Houston-Clear Lake with a Bachelors in History. He blogs at machinemean[dot]org, where he reviews movies and books and hosts a gambit of guest writers who discuss a wide range of strange yet oddly related topics. You can follow Thomas by joining his author newsletter at http://goo.gl/2CozdE.

A tale of revenge and BBQ!!!

This entry was posted on February 25, 2015 by Thomas S Flowers. It was filed under Horror, Reviews and was tagged with Aliens, Dawn of the Dead, Ellen Ripley, Gaylen Ross, Gillian Anderson, Gillian Leigh Anderson, Hellbound, Hellraiser, Horror, Let the Right One In, Lina Leandersson, Linda Blair, PTSD, Reviews, The Evil Dead, The Exorcist, women in horror, X-Files.