IT: a modestly late book review

Well, who says any book review is late? By months or even by near thirty years? And yes, it has taken me about thirty years to read this particular piece. And before I begin, let me say IT is not my first nor my favorite of Stephen King novels. Curious what is? Pet Cemetary has always been a special book for me. Its so normal till its not and when its not…well, let’s just say things get very dark and haunting. Especially in the woods with that creature you never really get to see!

This book was a great read. The story of seven friends growing up in the 1950’s America was beautiful. And the histories a details of everything made the characters and places feel real and rooted in reality. In my mind, whatever the creature IT was, demon, space monster, outer dimensional being, whatever, felt as if it could really exist. The monster had its own history, of sorts, and thoughts, which gave a deeper way of understanding its desires and wants. Of simply made sense and so became all the more terrifying! The two time lines worked and moved the story along, smoothly. Till the end where everything comes at you in great globs of speed. The minor character were also beautifully tragic and welcomed. I loved hating Tom Rogan. And a loved hearing all the Derry town history, a lot of it was despicably chilling, like the lumber dude who chopped up all those people with an Axe.

My favorite character was Ben, both past and present. And I enjoyed his happy drive into the sun set ending with Bev. I cannot think of a character I didn’t care for except for maybe Stan the man Uris, mostly because of his obvious and painful absence. And when he was around, his character was annoying.

And now for the not so goods. The ending felt jumbled together. Yes, what’s going on in Derry is important but dang. A few paragraphs would have been nice. And what was with that one chapter where for some strange reason, they all have sex to be able to find their way out. I felt that bizarre part was not fleshed out (pun intended) to give it enough meaning and depth. Other than that, the ending was sweet and happy, strange for a work of horror, but welcomed. There was a mix of sadness with all the memory loss going on and the loss of those who did die. The end for Tom Rogan was disappointing. I really wanted him to suffer. Not the quick end in which he got. 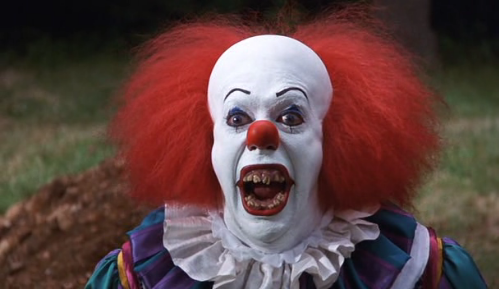 All in all, I’d give IT 4 out of 5 stars!! A great long read with lots good detail and historic memory. And still fresh, even after thirty years!!

This entry was posted on August 29, 2014 by Thomas S Flowers. It was filed under Book Review, Horror, Reviews and was tagged with Horror, IT, Pennywise, Stephen King.