The Hands of Orlac: 90 year review

The Hands of Orlac (or Orlac’s Hände) is a dark humorless movie. Much like all German Expressionist films, The Hands of Orlac is filled with madness, depression, disenfranchisement, alienation, and death motifs. According to film historian Lotte Eisner (a remarkable woman who, because of her Jewish heritage, fled from Germany in 1933 to escape growing persecution at the hands of the Nazis, she was later captured while in hiding and sent to a concentration camp in  Aquitaine, France. Eisner survived the war and enjoyed a long and memorable career until her death in 1983), in her work The Haunted Screen:

“Mysticism and magic, the dark forces to which Germans have always been more than willing to commit themselves, had flourished in the face of death on the battlefields. The hecatombs of young men fallen in the flower of their youth seemed to nourish the grim nostalgia of the survivors. And the ghosts which had haunted the German Romantics revived, like the shades of Hades after draughts of blood.”

From a blue-collared film historians perspective, such as myself, German Expressionism, as it seems to me is just as any other film in regards to depictions of the time in which they were made using symbols, imagery, and themes to show the audience an expression of the directors and/or writers interpretation of some event or trend; however, German Expressionism is, in its own style, heavy-handed in its imagery and symbolic relation to the age in which it was made. In effect, German Expressionist films, such as The Hands of Orlac, give us a gut wrenching depiction of the aftereffects of World War I. Consider that in Austria-Hungary alone, some 1,495,200 soldiers died during the Great War, including 480,000 that would die as prisoners of war. The Storm of Steel, a phrase coined by German solider, writer, philosopher Ernst Jünger, is considered to be the first mechanized war. And according to European historian Eric Brose:

“[The] ghastly maiming machines of modern war had changed…the streets [of Europe] of 1914, [that were] so full of life and youthful vigor, [into monstrous] defacement’s, [men with] their lips and jaws blown away, feeding tubes inserted where mouths had been, wads of gauze stuffed in nose holes bigger than silver dollars…and piles of amputated body parts. [The] survivors among these half-men would somehow have to adjust to civilian life” (Brose, pg. 77). 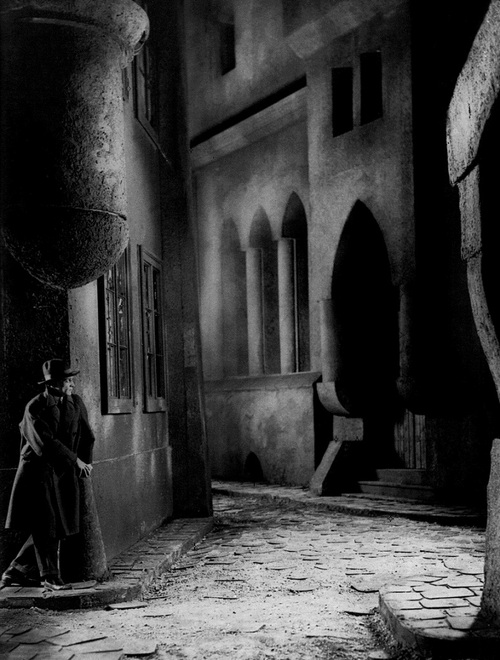 The German Expressionist movement is a byproduct from said “adjustment.” Down to a film, The Hands of Orlac is an amazing story; heart wrenching when interpreted in its own subjective history. One of the most chilling scenes is a horrific train wreck towards the beginning of the film, in which the main protagonist, concert pianist Paul Orlac loses both his hands. Disturbing enough for sure, but paralleled with the history of 1924 when the streets of Austria and Germany were filled with mutilated veterans, the scene is all too real. Journalist and critic John J. O’Conner, during the 1990’s commented regarding the uncomfortable expression we often find in film, that “horror is not limited to comic books. Primal nightmares are rooted in reality, and the overlapping of images can be disorienting.”

The wife of Orlac, Yvonne pleads with a surgeon to save her husbands hands. The surgeon does, but uses the hands of a recently executed murderer called Vasseur for the transplant. Here again, we are presented with a dual image: pianist and murderer. One bound to creation; the other, bound to destruction. Its interesting that director Robert Wiene (famed director of The Cabinet of Dr. Caligari) had used this dual relationship and struggle for poor Paul Orlac. Before the Great War,  Europe had enjoyed an era of artistic relativism. In March of 1899, composer Richard Strauss was considered to be rather ordinary “elegant-looking man whose odd style matched the polyphony of [his] strange [performance in] A Hero’s Life.” Strauss, much like Paul Orlac, was a famous conductor of music. In A Hero’s Life, preformed in Frankfurt’s Municipal Museum (though the building would survive WWI, it would be destroyed by Allied bombing during WWII) to an audience made up of European aristocracy who sat uncomfortably in their chairs, clinching against a melody that reflected a mood anguished by the birth pains of modernity. According to historian Brose, Richard Strauss’ performance pulsated, not just with disdain for the new social transformation, but also with the rapid growth of industrialization and technological change occurring within a “political structure poorly [suited] to withstand such [a] challenge.” One of the most curious moments during Strauss’ A Hero’s Life was when, while crouching, he would suddenly stand upright and point toward the brass players hidden on either side of the orchestra, as if with a wave of his baton, Strauss orders a battalion of conjured soldiers in a “forward march.” 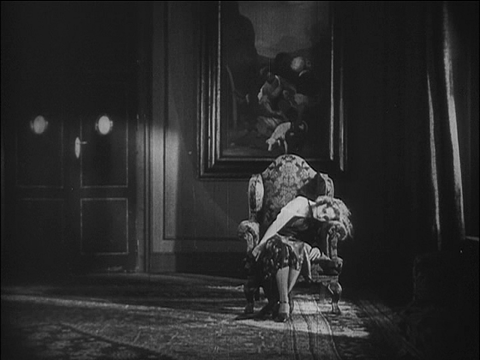 Wartime destruction is not the only euphemism Wiene conjures. Consider also that five years after the Great War had ended, “almost three million civilians in Germany and Austria-Hungary…[were] succumbing in great numbers to tuberculosis, pneumonia, typhus, and a deadly new mutated strain of influenza.” For the people living in the times of 1920’s Europe (while America enjoyed the Jazz and roar of prosperity), the horizon was truly apoplectic. And the films during this era embraced those very sentiments. Have you considered the themes of some of our most beloved movie monsters here in America? Where do you think Frankenstein and Dracula were born?   .

The remainder of the film besets a tortured Orlac, who can no longer play the piano, becomes destitute, and is eventually blackmailed by the convicted and supposedly executed murderer Vasseur. I won’t spoil the end for those of you who haven’t given this film a gander, but I’ll say that it had a somewhat bizarre if not entirely cheerful ending. Among many firsts, The Hands of Orlac is a precursor to the forensic crime movies found during the Weimar film era. The plausibility of using wax impressions or similar techniques to falsify prints seems far fetched, this was pre-CSI. Forensic science was just becoming a method for police/criminal investigations. And though the method is used incorrect in the film, the director moves us to question if it can be reliable, as Orlac’s proof of innocence comes from eye witness testimony and not from this new age science detectivery, something completely opposite compared to today, as witness testimony has been proven to be far less reliable than scientific evidence. Perhaps another jab by the director toward modernity during post-war malaise. Basically, can people be trusted behind the cog and wheel of industrialism? A notion that has forever remained a centerpiece for film; a question we are left to ponder as Orlac, with reassembled hands, carries his distraught wife off into the sunset.

Often called The Hemingway of Horror, Thomas S. Flowers secludes away to create character-driven stories of dark fiction ranging from Shakespearean gore feasts to paranormal thrillers. Residing in the swamps of Houston, Texas, with his wife and daughter, his debut novel, Reinheit, was soon published with Shadow Work Publishing, along with The Incredible Zilch Von Whitstein, Apocalypse Meow, Lanmò, The Hobbsburg Horror, and FEAST.  His military/paranormal thriller series, The Subdue Series, including Dwelling, Emerging, Conceiving, and Converging, are published with Limitless Publishing, LLC. In 2008, he was honorably discharged from the U.S. Army where he served for seven years, with three tours serving in Operation Iraqi Freedom. In 2014, Thomas graduated from University of Houston-Clear Lake with a Bachelors in History. He blogs at machinemean[dot]org, where he reviews movies and books and hosts a gambit of guest writers who discuss a wide range of strange yet oddly related topics. You can follow from Thomas at a safe distance by joining his author newsletter at http://goo.gl/2CozdE.