The month of trick or treat is upon us, and, no doubt, folks have already started making plans for Halloween parties and horror movie marathons. For the non-deranged, horror movies might be something usually reserved for this particular month of macabre and everyone has their favorites they like to watch. But if you’re going to start somewhere, you ought to start with the classics. Reserve the newer additions of horror for later in the night and kick start you’re party (or month, if you’re one of us depraved individuals) with one of the classics. Obviously, being a fan of horror, there is absolutely no way I could select just one film as said classic; instead, i’ve selected a few films from several popular categories, such as: zombies, slashers, demonic/supernatural, creature features, satire/comedies (including musicals), and even family friendly sarcastics. !

If you’re going to start somewhere, why not begin the night (or month) with a classic black and white from Universal? Some of my personal favorites from this era include both Frankenstein (1931) and The Wolfman (1941). Excellent tales that explored the question: who is the monster? Another plus is watching the late great actor Boris Karloff in one of his best pictures. Lon Chaney Jr. as the Wolfman is also enjoyable. Lawrence Talbot is just such a terribly tragic character and Chaney Jr. played him perfectly; he looked so sad, you really felt sorry for the guy. The Mummy (1932) is also good. Nosferatu (1922) & The Cabinet of Dr. Caligari (1920) are some of the best silent horror films from the German expressionist movement.  Or, if you’re more on the artistic side, why not check out my personal favorite from this silent film era, The Phantom Of The Opera (1925) with Lon Chaney, senior.

If  the Universal Studio Pictures monster movies doesn’t do it for you, then perhaps you might enjoy a classic zombie flick! Nothing says Halloween then walking, biting corpses shoveling across you’re yard, banging on the front door, looking to borrow some brown sugar. However, if you’re interest is peaked with said undead, why not start with one directed by the guy who started it all, George A. Romero? Any of his three original “dead” movies would suffice, which includes: Night of the Living Dead (1968), Dawn of the Dead (1978), and Day of the Dead (1985). However, if you’re more into spoof zombie movies, the only recommendation I could honestly give, keeping a clear conscience, is Return of the Living Dead (1985). Just avoid the sequels, please…seriously, you’ve been warned! But what if none of the above zombie movies isn’t enough? Have you considered Re-Animator (1985)? Trust me, you will not be disappointed. Its serious, but not serious. There’s gore and dark humor a-plenty. Re-Animator has to be one of Jeffery Combs greatest movies, his level of wit and concentration are disturbingly funny!

One of the most popular horror genres among Halloween movie marathoners would probably be the slasher. And why not? Slasher movies have enjoyed a long lived and celebrated history as a horror trope. And lovers of this particular genre have plenty of classics to choose from. Seriously, there are more slashers out there than any other typography of horror. So, where does one start when selecting a slasher movie? You could go with the movie that defined John Carpenter’s legendary career, Halloween (1978) (a movie many horror historians consider the granddaddy of all slashers). You could also go with Nightmare on Elm Street (1984), every child’s favorite dream killer! There is also Friday the 13th (1980), Scream (1996), Child’s Play (1988), or even The Texas Chain Saw Massacre (1974), though technically more savage cinema than slasher; iconic villain Leatherface has, for the most part, been considered a slasher-esk monster.

Okay, so maybe masked killers are a bit too kindergarten for you. Looking for something more dark or haunting? Well…have you given any thought to a demonic or supernatural inspired horror movie? There are almost as much of these as there are slashers. For the demonic inspired marathon, consider Clive Barker’s moody epic, Hellraiser (1987), following the tale of a man escaped from a sadomasochistic hell, chased by leather clad demons with hooks. Not you’re cup of tea? You can always watch this movie about a innocent young girl, sweet as can be, and possessed by a demon. The forever classic: The Exorcist (1973). Like ghost stories? Poltergeist (1982) is good haunt, Amityville Horror (1979) is decent enough to fill your dreams with nightmares about home ownership.  Salem’s Lot (1979) is almost (almost) as good as the book. Sleepy Hallow (1997) is an interesting take on the Ichabod Crane legend. And Evil Dead II…well, you can’t really celebrate Halloween without watching this amazing movie at least once…or twice, whatever the case may be!

Alright, so Frank, Bub, Jason, and Ash aren’t doing it for you. What else is there…what else is there, are you kidding me? Plenty! I’m guessing you for the creature feature type, well…look no further my friend! Horror’s got plenty of nasty’s out there to help keep you’re party going! Dig shark flicks? Jaws (1975) would be my only recommendation, and as Spielberg’s dip in the horror pool, incredible cast and awesome music score, Jaws is an amazing picture worth watching with plenty of nauseating sequels to keep you feeling nervous about swimming in you’re parents pool at night. Feeling more extraterrestrial than killer fish? No prob! How about Ridley Scott’s legendary film, Alien (1979). Trust me, everyone at you’re party will know at least one particular dinner scene from the movie and if they don’t, well…then they really shouldn’t be at you’re party, right? Or, you could always skip Alien (blasphemy!) and go for James Cameron’s take on the series, Aliens (1986) and folks will the drunkenly laughing, “Game over man, its game over!” Okay, okay, so you’ve been there, done that. Well, if you’re going to watch anything with creepy aliens, John Carpenter’s, The Thing (1982), is really the only way to go (sorry Ridley). For me, what really makes The Thing one of the best are its (before their time) special effects and the overwhelming terror of not knowing which of the characters is who they say they are, and not a shape-shifting nightmare. 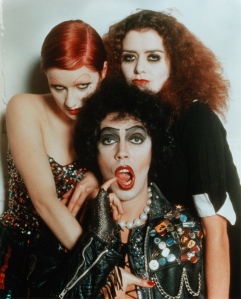 Not the serious horror movie type? Like to take you’re gore with a dash of wit? Then perhaps you’d be more interested in some “horror” satire instead. There are plenty of classics from this trope to choose from; you could even go all musical, if you’e brave enough. But how could one really go wrong with watching Tim Curry go full drag in The Rocky Horror Picture Show (1975)?  Trust me, if you’re party is a party worth showing up, there will be at least one person dressed as Dr. Frank-N-Furter. No? Okay…well, assuming there are actual people at you’re party, then you could always pop in Little Shop of Horrors (1986), or maybe Young Frankenstein (1974) with the distinguished Gene Wilder. Creepshow (1982) is worthwhile, especially for Stephen King and Romero fans. And last, but not least, the most recognizable horror satire, everyone ought to know, Ghostbusters (1984) should be watched at some point during the night (or month, whatever the case may be).

So maybe you’re party isn’t that kind of party. Maybe you’re hosting a family friendly event and before you can get you’re drink on, you need something for all the kiddos to watch. Don’t worry, we got you on this, and not really that surprising, there are lots of family friendly horror movies to choose from. Most of these will more than likely be playing on some channel on cable at some point during the month. There is the ever popular, It’s the Great Pumpkin, Charlie Brown (1966). Or there’s, Casper (1995)…no comment. The Addams Family (1991) is another 90’s Christina Ricci film bearable enough for adults to enjoy. If you’re kids are a bit older, try my childhood favorite, The Monster Squad (1987). This PG-13, teenage friendly flick has all the classic Universal monsters, plus a group of Goonies-esk friends who work together to stop Dracula’s plot of, i’m assuming, world domination. Last but not least, you can sit you’re kids down for cable’s go-to-film, Hocus Pocus (1993), where after 300 years, three sister witches are resurrected in Salem, Massachusetts during Halloween night. Plus its got Bette Midler, how could you go wrong?!?

As I said before, there could really be no “one” horror movie to go with, but hopefully i’ve given you plenty of options to choose from; if you haven’t already decided. Halloween is an amazing holiday worth celebrating. Why? Because its fun, it doesn’t take itself too serious, unlike some other holidays (cough-cough, Christmas, cough). When it comes to horror movies, its hard to go wrong. It really just depends on you’re particular tastes and mood you want for you’re party. If you’re wondering which horror movie i’ll be starting my month with, and if you don’t count episodes of The Walking Dead (i’m catching up with season three), Carpenter’s masterpiece The Thing (1982) will be my choice of terror. I do not have a definitive favorite horror movie, I simply cannot pick just one, i’m too much of a fan of the genre; but, The Thing comes damn close!