Weekend at the Movies: White House Down

Pacific Rim? Nah. World War Z? Nope. The Conjuring? PSH! If your heading out to the movies this weekend, chances are you might be seeing one of these usual suspects. Me? Not a chance! For us, my lovely bride and I, we went to check out White House Down. Why go see bad boy Tatum instead of awesome giant robots duking it out with Lovecraftian monsters? Because sometimes its nice avoiding the crowd and to just unwind in an easy, non complicated story.

If you happen to be like my wife and I, go check out White House Down. From the two movies coming out this summer regarding bad things happening to the President, White House Down is one of the more light hearted ones. With a PG-13 rating, the film feels like a down played Die Hard movie, with cheesy lines a plenty. The characters are likeable and Jamie Foxx as President Sawyer is the stuff of legend. My only hang up with the cast is Tatum. Nothing major, its just hard taking him seriously. And the political undercurrents are a tad annoying as well, but again, forgiveable.

White House Down is your ticket for a fun action-comedy adventure. If you are looking to avoid the muss and fuss of the crowds that is. Sure, the campy feel good ending should be expected, but hey, its got Jamie Foxx, you’re bound to laugh at some point.

The bottom line? White House Down does a decent job for entertainment. The action is Die Hard level without a ton of blood and broken necks. The comedy is great. And the campy ending mentioned above will make you want to puke. All in all, not a bad movie spending 20 bucks on two tickets to go see. 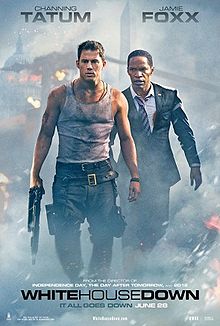 This entry was posted on July 20, 2013 by Thomas S Flowers. It was filed under Movies, Reviews and was tagged with Action, Comedy, Jamie Fox, Summer President Movies, Tatum.